A winner takes all battle between a fisherman and a four metre crocodile has been captured on an extraordinary video.

The fight between man and beast over who gets to eat a metre long barramundi looks like a movie, but it’s real and happened in the Northern Territory.

And the craziest part of all is the fisherman man who walks right up to the crocodile to retrieve his hat, risking life and limb in front of a determined monster.

It starts with a crocodile in the water at Cahills Crossing in Kakadu who suddenly sees a barra caught on a line.

The croc thinks ‘Ah, lunch’, but then is surprised to see the barra being dragged towards the humans at the side of the crossing. 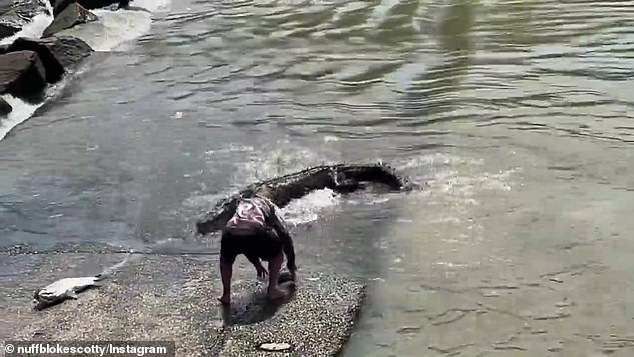 A man is pictured a metre away from crocodile in the Northern Territory, getting his hat back

The fisherman on the other end of the line does not do what most people would in this situation – cut the line and let the crocodile have his lunch.

Instead he redoubles his efforts to reel the fish in.

From there, it’s game on in a battle of wits over who wants the fish more.

The huge creature started to chase the big barra, but the fisherman, Scott Roscarel, did not let go.

As the croc closes in, onlookers scream in astonishment, but Mr Roscarel does not give up.

With the battle with the barra ending as it is dragged onto the the concrete of the crossing, the fight against the croc intensifies as the enormous creature keeps following.

Mr Roscarel leapt back when he realised that having manoeuvred the fish to dry land was not making the croc give up.

In doing so, he accidentally kicks his father’s hat close to the four metre monster.

His dad bravely goes to get the hat back, and does so before making a hasty retreat. 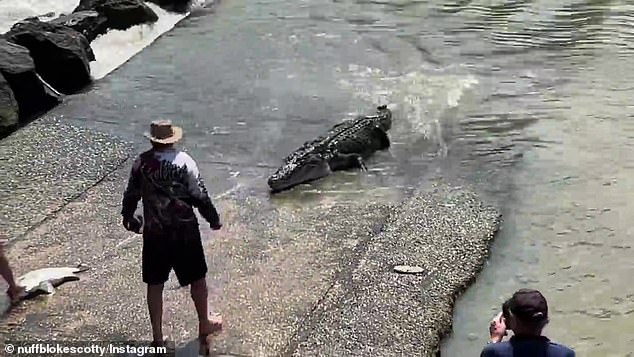 A crocodile is pictured chasing after a barramundi in the Northern Territory, while a fisherman watches on, seemingly unconcerned for his own safety

A person is then heard screaming ‘Let him have it’, referring, presumably, to the fish rather than the hat.

Mr Roscarel does not let him have the barra. He drags it in as the croc crawls up onto the concrete.

For a moment it looks like it’s weighing up its options, but then gives up. Mr Roscarel had won the war.

The Territory man was fishing at the crossing with his visiting dad, who initially hooked the fish.

He told his son he wasn’t going to be able to beat the croc and handed his line over. 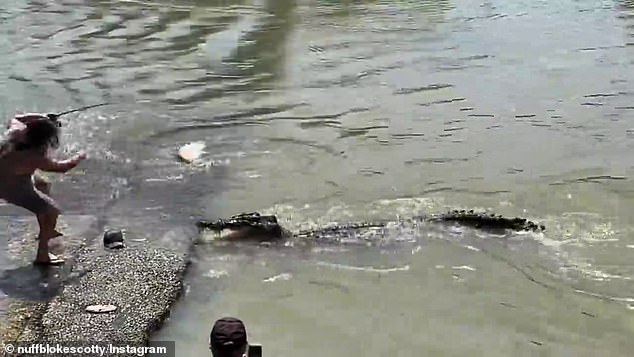 A crocodile is pictured up close and person at Cahills Crossing, Kakadu in the Northern Territory

‘I had to manhandle it. When the fish hit the edge of the crossing it jumped and the line for got caught on the front of the crossing, he told the NT News.

‘I had that much adrenaline, I wasn’t thinking too much. I realised how close the croc was and I backed up.

‘I snapped my rod in the process and got the fish in the nick of time,’ he said.

When his father went to get his hat, he said ‘What’re you doing mate? I’ve got 15 at home, I’ve only got one father.’

After a few barren days of fishing before that, Mr Roscarel was delighted with his catch, the fact that a tourist videoed it and, most of all, that his dad didn’t get any closer to the croc. 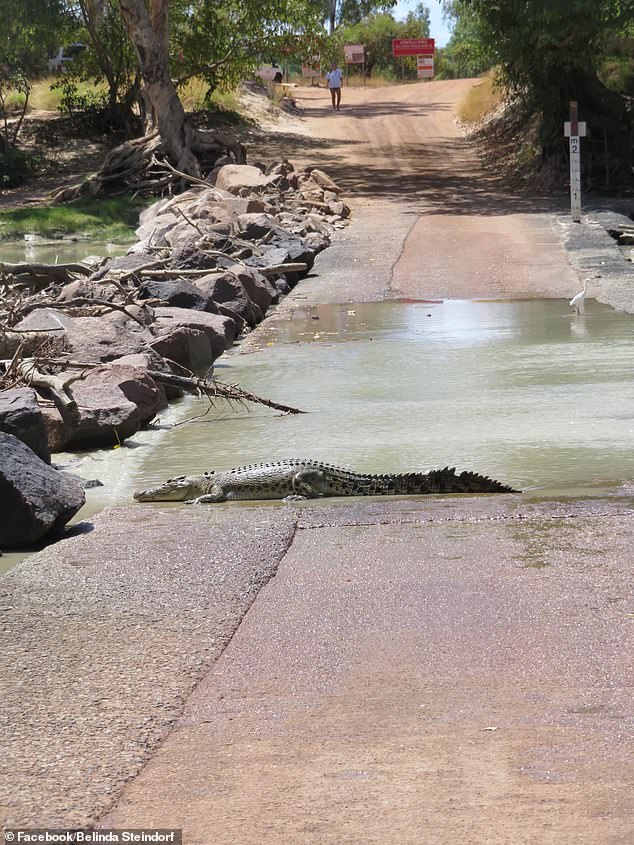 A crocodile crosses the road at Cahills Crossing, Kakadu in the Northern Territory as a human steers well clear

Monkeypox outbreak may have been sparked by sex at two raves in Belgium and Spain, WHO expert warns
43 mins ago