Millions of users around the world depend on PCs for work. Perhaps Windows 11 will add a lot to their daily experience. This is not limited to those who work remotely only, but even those who work from offices and workplaces, and also rely on computers, whether they are desktop or portable.

Microsoft is currently preparing to launch Windows 11 as a free upgrade for all Windows 10 users. The company has confirmed the launch date to be in early October.

The system comes with dozens of new features, and perhaps the focus sessions feature is one of the most important features for those who use their devices to work most of the time. Along with significant changes to the design and overall usage experience.

Read also: Microsoft releases Windows 11 on the fifth of October

A large number of users rely on techniques for organizing and monitoring work times. The pomodoro technique – o Technique Tomato – one of the most prominent technologies in this field. It is based on working for 25 minutes, resting for 5 minutes, and repeating the same process until the work tasks are completed.

Users relied on third-party apps to track working time and run a dedicated timer. However, the focus sessions feature in Windows 11 seems to solve this problem, as it will be integrated with the To-Do application for task management, and the Spotify application for playing music.

Perhaps the integration with Spotify and To-Do will provide the perfect experience. As the user will be able to manage tasks via To-Do. Listen to music or podcasts on Spotify. Keep track of working time with the new feature.

Focus sessions come as part of the Clock app. It is an application that the user would not normally care about. The following image shows what the focus sessions feature looks like: 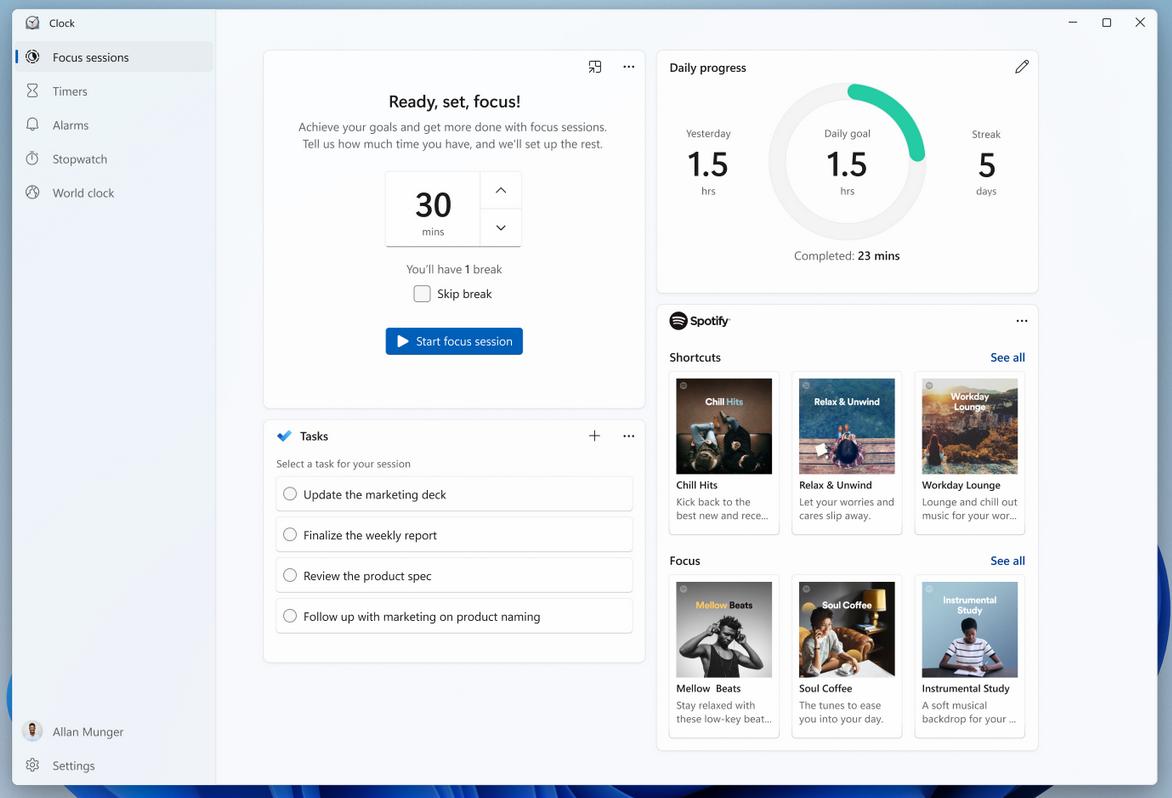 As can be seen from the image, the new feature will work as an integrated application, but it is integrated into the watch application. The top right pane displays the number of sessions the user has spent, and next to it in the middle of the screen shows the duration of the sessions that the user will control.

Besides, the user will be able to associate sessions with the goals he previously scored on the To-Do goal management app. It is an application that Microsoft started developing after its acquisition of Wundrelist.

As for the area at the bottom right of the screen, it will allow the user to quickly access playlists on Spotify to listen to the appropriate music for him while working.

Read also: What is the relationship between Windows 11 and Windows Vista

The new feature displays a number of suggested playlists for the user. Besides displaying favorite playlists, the user is generally able to link the focus sessions feature to their To-Do and Spotify accounts.

There is no doubt that the new feature will provide an integrated experience for users who prefer tracking sessions on Windows, but there are alternatives currently available that provide the same features, such as TickTick or Focus To-Do.

Also Read: Spotify Knows More About You Than You Think

The most important information about 3D printing

How to view photo information in iOS 15
20 mins ago

Using tables in the Apple Notes app
34 mins ago

Control and reduce Others space on iPhone
45 mins ago