Technology has evolved greatly in recent years. But in the 1980s things were very different. As the devices were limited in terms of specifications and performance. And it only supports one app, and that applies to games as well.

In that era, personal computers came mainly from Apple and IBM. These devices were able to run simple games. Perhaps a large number of users like to play at inappropriate times, such as work and study times.

This simple reason was the secret behind the appearance of the Boss Key button, and this button with a distinguished name was used only to block the content on the screen, so the user could hide the game in the event that his manager or guardian passed.

Simply because the devices were supporting one app as mentioned above. At the time, users did not have the luxury of pressing Alt and Tab to move to another window in the blink of an eye.

There’s no doubt that the whole story is funny, but this innovation of the cute has caused the spread of keyboard shortcuts that we are so accustomed to in our time. Besides, this innovation solved the problem of the device supporting only one application or program to run.

Also Read: Atari Focuses on PC Games Instead of Phone

Boss Key in the gaming world

The Boss Key was invented by software developer Roger Wagner in 1981, and was first used in a game known as Bezare that was launched on the Apple II in 1982. It is a very simple shooting game.

While playing the game, pressing Ctrl+W displays a fake table document to replace the game’s full screen content. Then the player can return to play by pressing any of the keyboard buttons.

Read also: Hackers are using games to mine Monero

The same feature appeared in a game known as Asylum on the IBM PC in the same year. Over time, this funny feature began to reach a greater number of games with names such as “control buttons” or “panic buttons”.

The feature arrived for the popular Tetris game on the IBM PC, and it worked as soon as the Esc button was pressed and a blank DOS command window was displayed. Between 1982 and 2006, more than 70 games were released that support this feature, according to for moby James.

Read also: Microsoft is developing Xbox games for the cloud

Notable games that supported this feature were Spitfire Ace (1984) and Wolfenstein 3D (1992). Some games handle this feature playfully, as Space Quest III (1989) had the Boss Key Ctrl+B. But when you press it, a message appears stating that the game will not participate in deceiving administrators or parents! 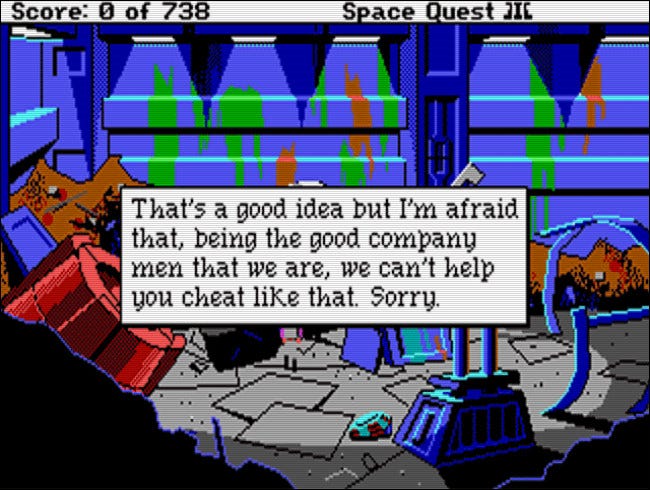 Of course, this feature has largely disappeared in recent years, because it is no longer needed with the advancement of operating systems and personal computers in general. However, some platforms and applications still use it jokingly.

An example of this is the NCAA website, which offers a Boss Key that can be clicked while watching matches to display a window similar to Zoom meetings. And still the osu game! Freebies supports this feature. As pressing the number 0 during the game hides it completely.

Apple car may turn into a service, not a product

Your guide to differentiating between generations and versions of iPad

Featured Posts
The Trilogy – The Definitive Edition
22 mins ago

The Power of the Dog movie review
32 mins ago