Two additional positive COVID cases have been revealed in connection with U.S. Secretary of State Antony Blinken’s international tour earlier this month, bringing the total number of those infected while travelling to three.

Blinken, 59, departed for his eight-day tour to the United Kingdom, Indonesia, Malaysia and Thailand on December 9 at Joint Base Andrews aboard the U.S. Air Force Special Air Mission 50601.

The trip was cut short, however, as after a journalist had contracted the virus while the traveling party was in Malaysia, which had forced an abrupt cancellation while they were in the country.

On Saturday, it was revealed that the two additional positive cases among crew members had not been not disclosed, bringing the total number of those who tested positive during the trip to three.

Blinken had planned to travel to countries in Southeast Asia to smooth relations due to China’s growing influence in the region. 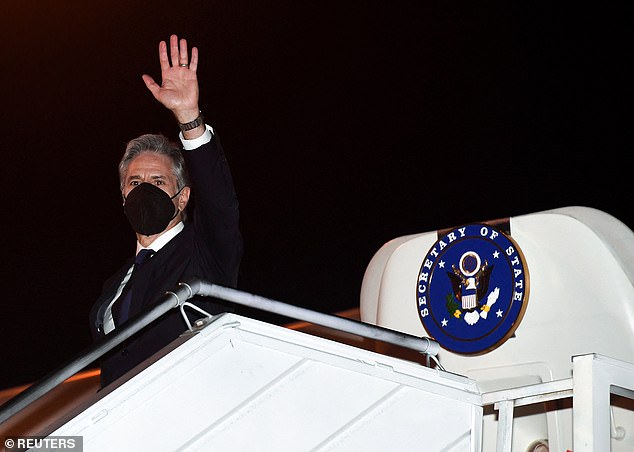 US Secretary of State Antony Blinken, 59, cut his international trip to the UK and Southeast Asia short after three positive COVID cases had been found among the members of the traveling party 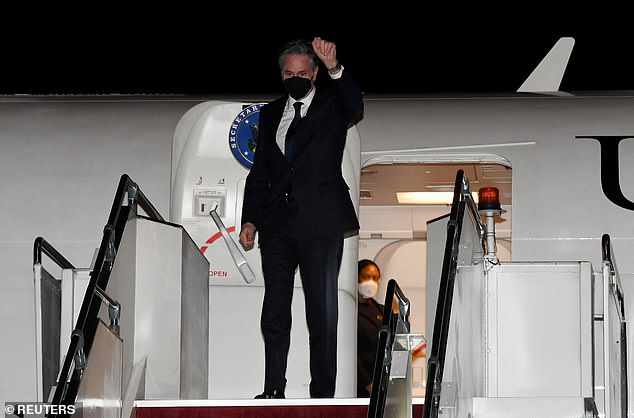 Blinken is seen arriving in Malaysia where a journalist contracted the virus. Two other crew members were recently revealed to have also tested positive which had previously been disclosed 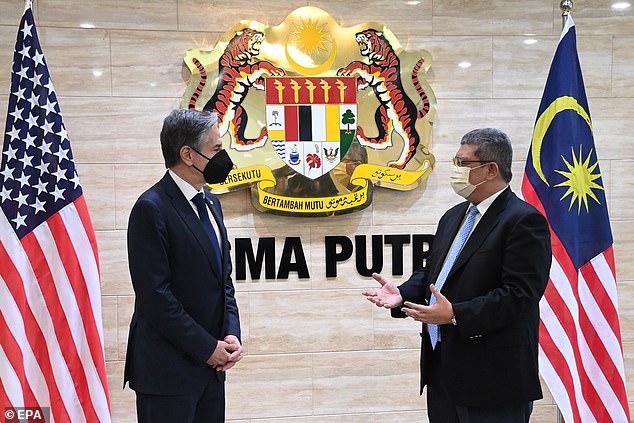 ‘Both aircrew members were fully vaccinated. Neither had come into close contact with the Secretary of State or senior staff.’

She said one is asymptomatic, while the other is experiencing mild symptoms and that both are following host nation COVID protocols, which generally mandate a 10-day quarantine.

The first crew member, who was symptomatic, tested positive in Jakarta, after arriving in the Indonesian capital from Liverpool, England, where Blinken participated in a Group of Seven foreign ministers’ meeting.

It was not immediately clear where the second crew member tested positive, but the journalist tested positive in Kuala Lumpur on Tuesday, according to the State Department, which has declined to comment on the Air Force cases. 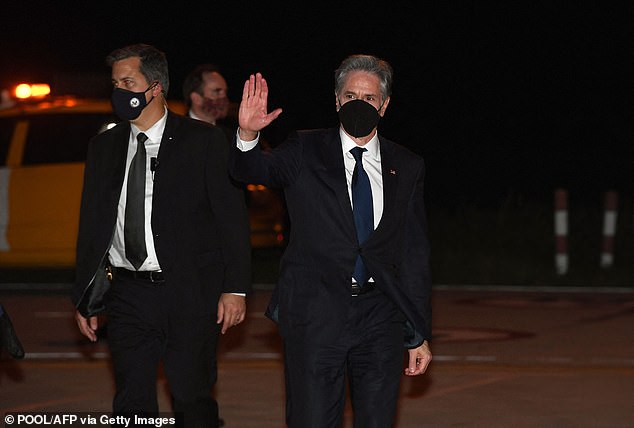 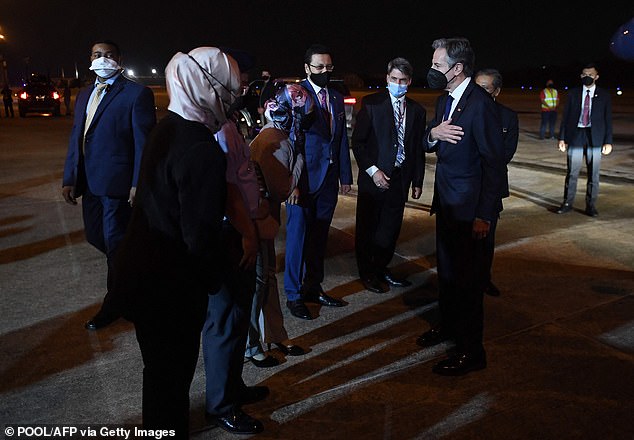 This follows the State Department’s announcement that a journalist among the traveling press corps had tested positive, which alarmed the rest of the party and resulted in the trip being cut short.

The journalist’s diagnosis in Malaysia set off a panic among the traveling party because of quarantine requirements for those testing positive at the next stop in Thailand.

Presented with a series of options to avoid the possibility of others testing positive, especially before the Christmas holiday, Blinken opted to curtail his trip.

Instead of spending Wednesday night in Thailand and having meetings there the next day, Blinken made a brief stop at the airport in Bangkok to replace the infected crew members and did not leave his plane.

He then flew to Guam, an American territory in the Pacific, and then to Hawaii before returning to Washington early Friday morning.

Two statements were given after the journalist’s diagnosis and the cancellation of Blinken’s meeting in Thailand but neither had mentioned the positive results of the two crew members.

The State Department says it has more than fulfilled the Centers for Disease Control and Prevention’s (CDC’s) guidance for COVID by requiring every member of the traveling party to take daily COVID tests over the course of the trip and asking all of those on board the plane to take follow-up tests. 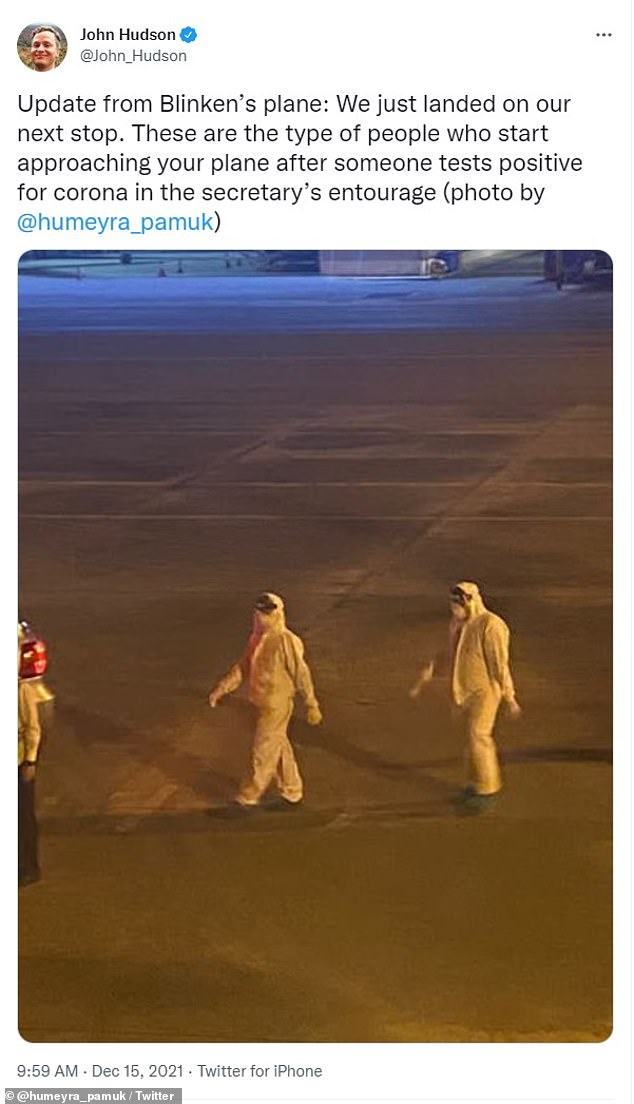 The department said Saturday that all official members of the traveling party had tested negative for the virus upon their return to Washington.

‘At no time on the trip were the Secretary or his senior staff deemed to be close contacts of anyone who tested positive for COVID-19,’ a spokesperson with the department said.

‘Throughout the trip, we far exceeded CDC guidelines in terms of our testing and mitigation measures.’

The department also took measures such as increasing testing, enforcing social distancing and notifying traveling members who may have come into contact with the virus.

The spokesperson for the department also revealed that traveling party members had been tested at least eight times for COVID during the week.

However, military crews with the Department of Defense were not required to receive COVID testing and could even sign a waiver to excuse them from getting tested in every country they visit.

‘All Air Force aircrew members supporting overseas DV travel are tested before flights departing the U.S., on the ground in every country that requires testing, and upon returning to the United States,’ Brigadier General Patrick S. Ryder said.

The number of immigrants who arrived in Britain is close to 27,000, as the Home Office revealed new figures

How Omicron proves your investment portfolio