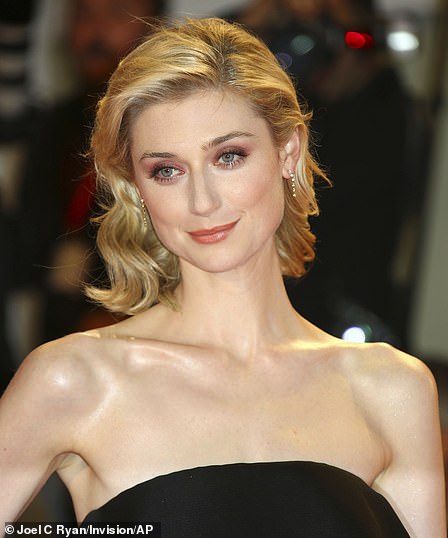 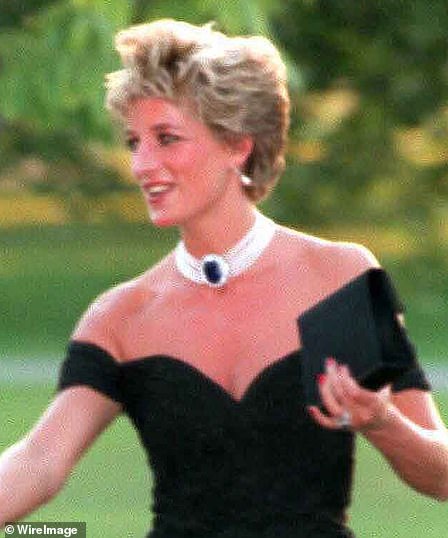 Out with the old… MailOnline takes a look at The Crown’s new stars for series five – it was announced that Elizabeth had been cast as Princess Diana last August, and fans of the Netflix show were delight to hear that the Australian actress would be taking on the role 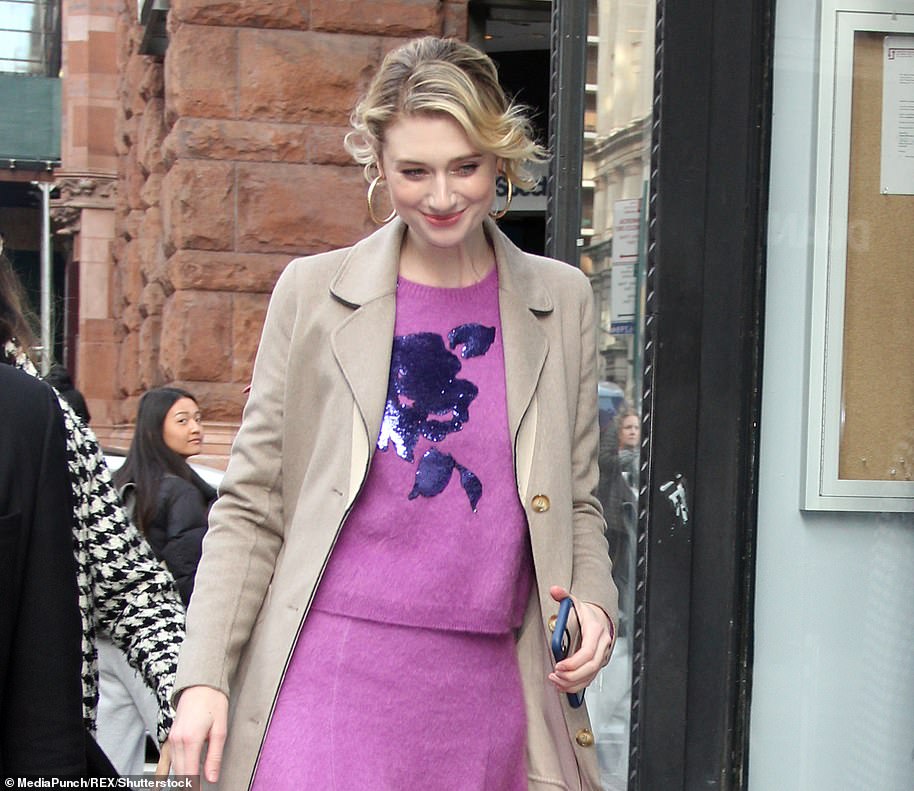 Screen star: From her big break in 2013’s The Great Gatsby to becoming a household name thanks to 2016 TV series The Night Manager, Elizabeth steadily climbed up the ranks of showbusiness to secure the career-making role

It was announced that Elizabeth, 30, had been cast as Princess Diana last August, and fans of the Netflix show were delighted to hear that the Australian actress would be taking on the role – replacing Emma Corrin. 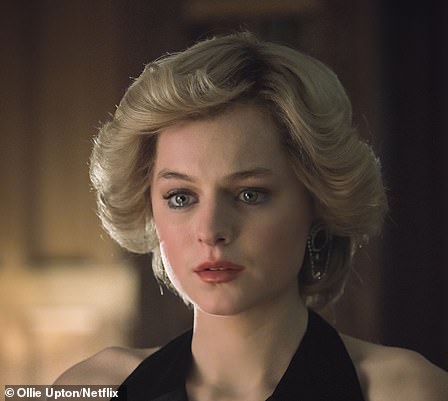 Past: Emma Corrin played the People’s Princess in the show’s fourth series

From her big break in 2013’s The Great Gatsby to becoming a household name thanks to 2016 TV series The Night Manager, the star steadily climbed up the ranks of showbusiness to secure the career-making role.

A former ballerina in training, Elizabeth switched to theatre during high school. She studied at University of Melbourne’s Victorian College of the Arts, where she was also awarded the Richard Pratt Bursary for outstanding acting students.

She shot to stardom after making her debut in The Great Gatsby in 2013, after impressing the film’s director, Baz Luhrmann, with her brief appearance in the 2011 Australian movie A Few Best Men.

Since then, she has appeared in several movies including The Man from U.N.C.L.E., Tenet and The Cloverfield Paradox.

Elizabeth has also done voiceovers for Peter Rabbit and appeared in television series The Kettering Incident and The Night Manager alongside Tom Hiddleston.

The actress said of her casting last year: ‘Princess Diana’s spirit, her words and her actions live in the hearts of so many. It is my privilege and honour to be joining this masterful series, which has had me absolutely hooked from episode one.’ 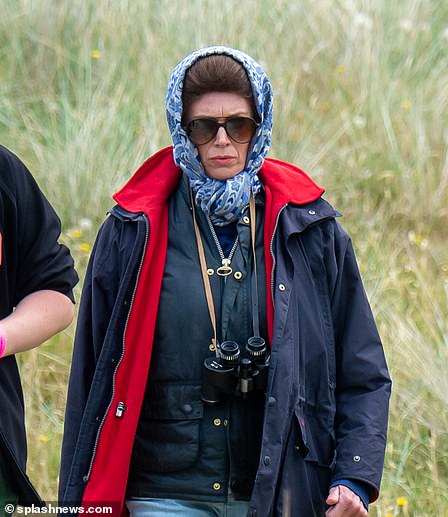 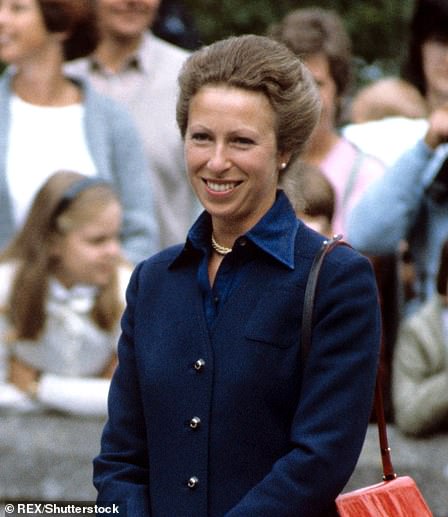 Who’s who? The actress playing Princess Anne in The Crown’s fifth season has been revealed as The IT Crowd and Humans star Claudia

RADA-trained performer Claudia was spotted in character on-set at Scotland’s Covesea Lighthouse on Tuesday, where she was shooting opposite Imelda Staunton, who is taking on the role of Queen Elizabeth II in the Netflix show.

Claudia, 45, boasts a number of TV gigs on her CV as well as a high-profile co-star following her turn in 2005 thriller Archangel, where she starred opposite Daniel Craig in the show about a mystery concerning dictator Josef Stalin. 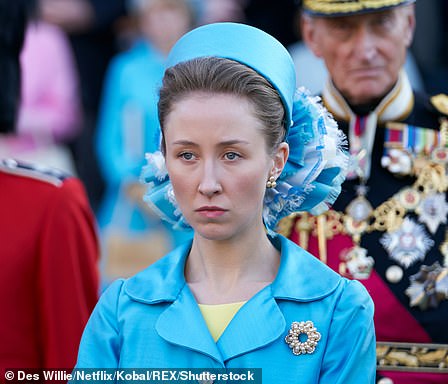 Throwback: The role of Princess Anne was previously played by Erin Doherty in The Crown’s third and fouth series

She is a farmer’s wife and a mother-of-three and is said to have been ‘shocked and delighted’ when she was chosen to play Anne when the Royal was aged in her 40s.

As well as Imelda, Claudia was also shooting alongside Theo Fraser Steele, who is thought to be playing Anne’s second husband Timothy Laurence.

After she was seen on set of Tuesday, tongues began wagging over the identity of who was playing the royal and also over her remarkable likeness to Princess Anne.

One Twitter account entitled Royal Watcher, shared a message reading: ‘Ok I think the actress playing Princess Anne is called Claudia Harrison? #TheCrown’, alongside a trio of images of Claudia in different roles as well as an image from on-set.

The role of Princess Anne was previously played by Erin Doherty in 2019’s third and last year’s fourth series of The Crown. 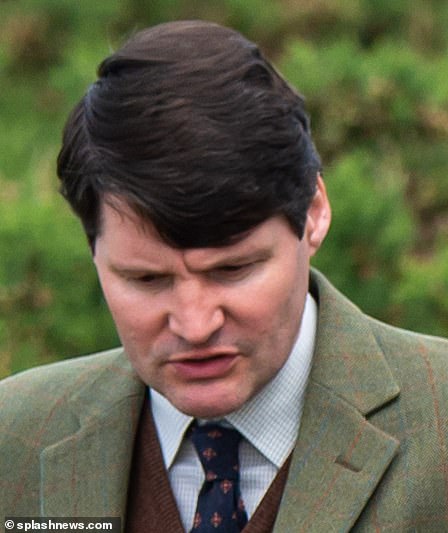 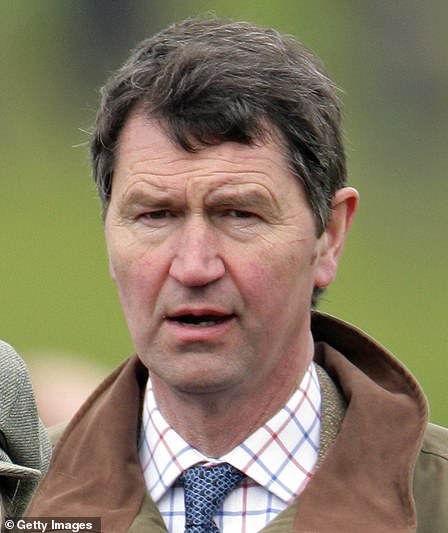 He cut a dapper figure during filming to play the role of Anne’s spouse, who she married in 1992 after splitting from Mark Phillips.

Theo’s acting career spans back to 1996, when he starred in Casualty while he also played Christian Holhurst in political satire The Thick Of It in 2005.  As well as acting, he is a successful deli owner and runs a shop with his wife in Hackney.

Theo comes from Essex and trained to be an actor in London before working with Bill Nighy and Stella Gonet in Richard Eyre’s production of David Hare’s Skylight at the National Theatre aged just 23.

He went on to have many stage roles both in the capital and across the country. In The Thick Of It he played an MP’s son who was shoved up against a wall and subjected to a torrent of abuse by the foul-mouthed Malcolm Tucker.

Speaking in 2018 about moving from acting to food, when he told The West Morland Gazette: ‘We didn’t choose to do it – we sort of fell into it. It started with just me. We now own the business and have a staff of 12’. 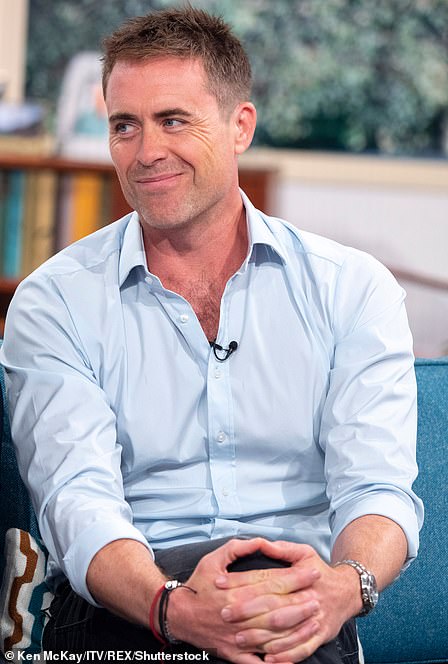 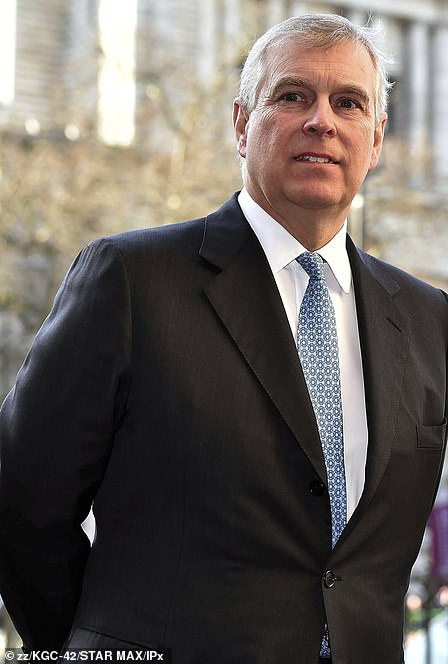 The Crown series 5: James Murray is set to take on the role of Prince Andrew following his TV appearances in Cutting It and Primeval (James pictured in 2018)

James Murray, 46, will take on the role of Prince Andrew, replacing Tom Byrne, who played the Queen’s second son in series four.

James’ previous endeavours include his portrayal of Stephen Hart in ITV’s Primeval and playing Liam Carney in BBC One’s season four of Cutting It.

He acted as the lead DCI in completely improvised show Suspects.

The Mancunian actor, who is married to actress Sarah Parish, is also currently filming Masters of Air – the Steven Spielberg and Tom Hanks-produced Apple TV series. 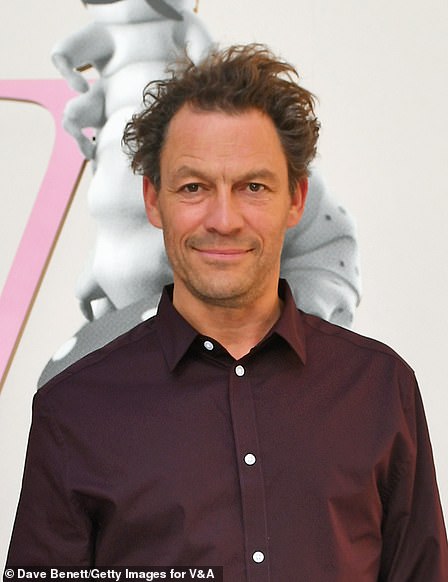 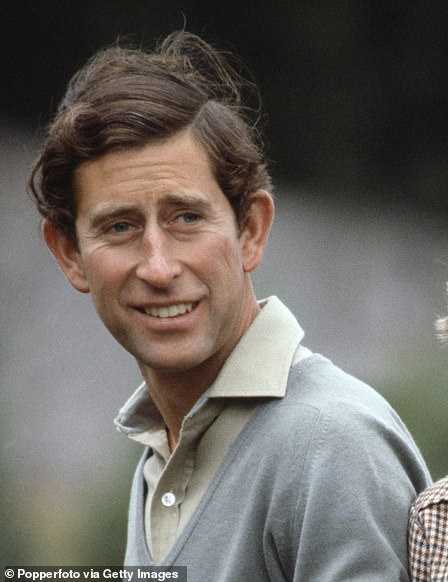 New role: Dominic West is set to play Prince Charles in the final two series of The Crown

Dominic West is set to play Prince Charles in the final two series of The Crown. 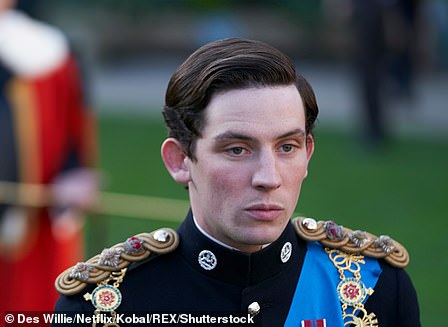 Critically acclaimed: Dominic will replace Josh O’Connor who has played the role for two series

The actor, 51, is understood to be taking on the role of Prince Charles at the time of his affair from Diana, Princess of Wales, with his second wife Camilla Parker Bowles.

A TV insider told The Sun: ‘Show bosses looked at several stars for the sought-after role, but he was by far their preferred actor. Now both parties are hammering out a deal.’

They revealed how the ‘irony’ of the casting will ‘not be lost on anyone’ following his recent scandal where he was pictured embracing actress co-star Lily James last year.

Dominic will replace Josh O’Connor who has played the role for two series. 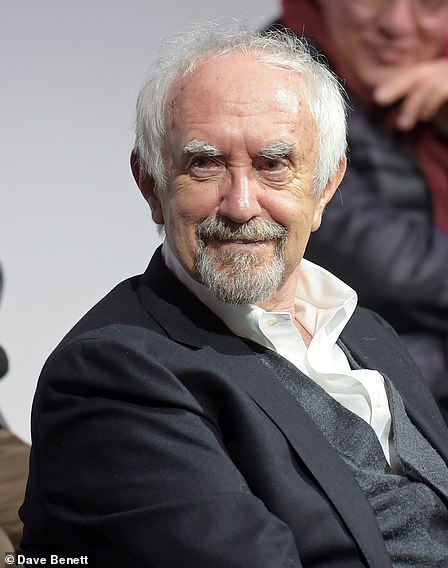 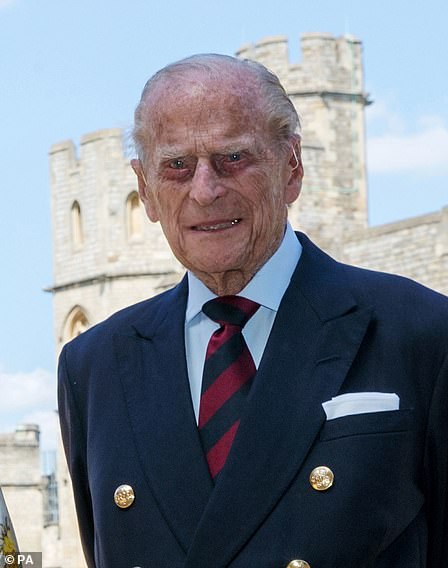 New role: The Two Popes actor Jonathan Pryce, 73, has said he is ‘confident’ to take on the ‘daunting’ role of Prince Philip in The Crown’s final two seasons

Jonathan Pryce has said he is ‘confident’ about ‘tackling the daunting prospect of portraying Prince Philip’ in seasons five and six of The Crown.

It was revealed in August that the actor, 74, will join the star-studded cast of the hit Netflix show and portray the royal through the 1990s and 2000s. 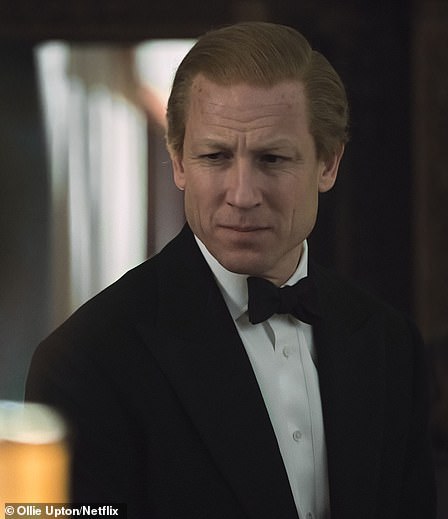 Past: Tobias Menzies played the late Royal in series three and four

Speaking after the announcement, Jonathan added that it will be ‘a joy’ to act alongside Imelda Staunton as the Queen and Lesley Manville as Princess Margaret.

In a statement shared on social media by Netflix, Jonathan said: ‘I am delighted to be working with Netflix again.

‘The positive experience I had making The Two Popes has given me the confidence to tackle the daunting prospect of portraying Prince Philip.

‘To be doing so with Peter Morgan in the company of Imelda [Staunton] and Lesley [Manville] will be a joy.’

As well as praising the other on-screen talent lined up for the show, Jonathan added that he was excited to be working with screenwriter Peter Morgan.

The actor’s role in The Crown comes after he was nominated for an Oscar for his role in Netflix’s The Two Popes. However he lost out on the gong to Joaquin Phoenix.

In previous instalments of The Crown Prince Philip has been played by actors Matt Smith, in the first two seasons, and Tobias Menzies, in series three and four. 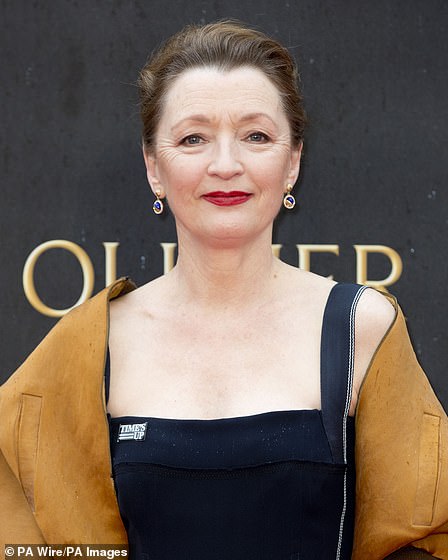 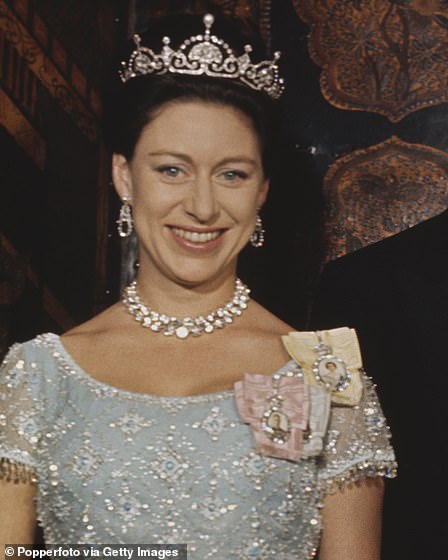 Congrats! Lesley Manville has been cast as Princess Margaret (right in 1966) for the fifth and sixth seasons of The Crown

Lesley Manville has been cast as Princess Margaret.

The actress, 64, will be taking the reins from current star Helena Bonham Carter for the fifth and final series of the Netflix hit. 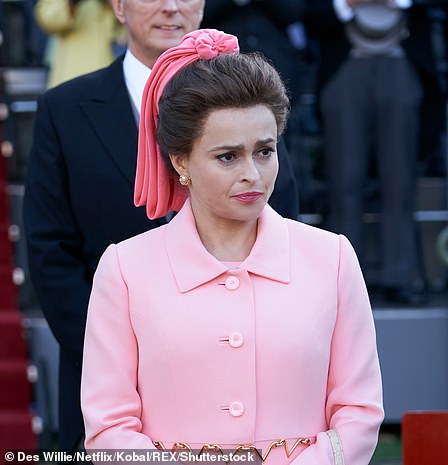 Goodbye: The actress, 64, will be taking the reins from current star Helena Bonham Carter for the fifth and final series of the Netflix hit

Lesley is believed to have been producers first choice for the role, is set to play the Queen’s younger sister during one of the ‘darkest periods of her life’.

Confirming the news in a statement, she said: ‘I could not be happier to be playing Princess Margaret. The baton is being passed on from two formidable actresses and I really don’t want to let the side down.

‘Furthermore, to play siblings with my dear friend Imelda Staunton will be nothing short of a complete joy.’

The role has been played by Helena for season three and upcoming season four, and was taken on by Vanessa Kirby in season one and two.

A source told The Sun: ‘Lesley is hugely respected by the creators of The Crown and was their first choice to play Princess Margaret this time.

‘They wanted a star who could tackle the difficult role of a royal entering one of the darkest periods of her life, when the Windsors faced endless scandals and she was dogged by ill health.

‘That’s why Lesley was one of the first actors they approached to join the new cast, and remains one of the few who has fully committed to The Crown. 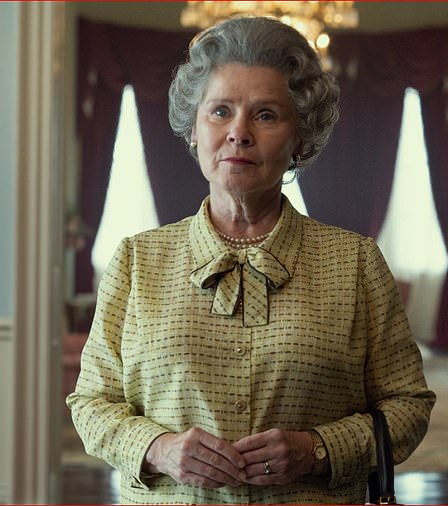 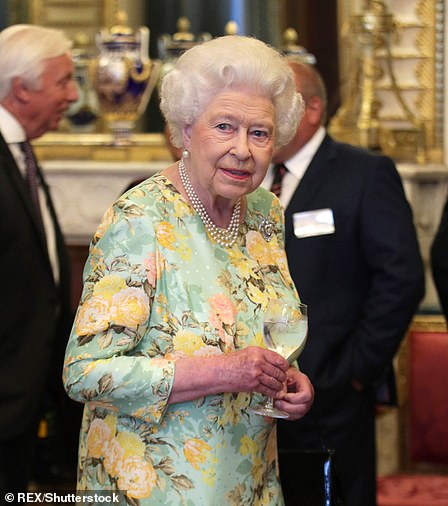 Her Royal Highness: The very first image of Imelda Staunton in character as Queen Elizabeth II was revealed last week

Speaking about joining the hit show, Imelda, 65, admitted she is ‘frightened’ to take on the Queen Elizabeth role in The Crown.

The actress is following on from Claire Foy and Olivia Colman, but says she has an ‘extra challenge’ playing a recent version as it will be fresh in the audiences mind. 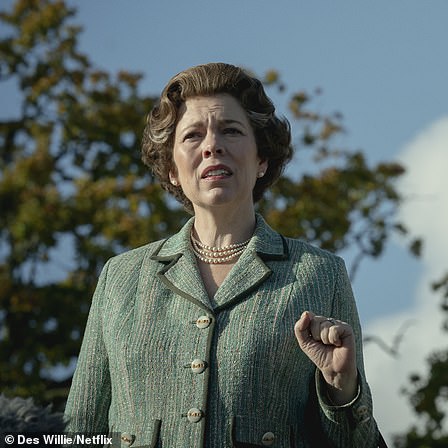 Before: Oscar-winner Olivia Colman has played the monarch for two series

Speaking to The Sun, Imelda said: ‘When Claire was in the first series, to all of us that felt like history. Then following on from that with Olivia, again it seems like history.

‘Now we start in 1991 playing someone much more recent. That’s the extra challenge I have, people saying, “Oh, I don’t think she’s like that at all”‘.

Many members of the series four cast have also joked that they won’t be giving any advice to their successors. Oscar-winning actress Olivia said recently: ‘I haven’t spoken to Imelda and I wouldn’t dare offer any advice about playing the Queen.

‘Imelda is extraordinary and she’s going to do it all much better than me. I can’t wait to watch what she does.’

The Crown lovers took to Twitter to react to the news.

One wrote: ‘Gonna miss this Queen [Olivia Colman] but I’m sure Imelda will do a brilliant job. My time with the crown is done, some of last seasons cast and this seasons were just not it for me. Good luck to everyone involved tho.’

One fan simply penned: ‘perfection’ with another calling the new line-up ‘very strong’.

Blind, hearing-impaired pensioner, 95, was left lying on the floor for hours for an ambulance
8 mins ago