Armies of ‘super ants’ that suffocate chickens and start fires by chewing wire could be wiped out by a naturally occurring fungus, a study claims.

The tawny crazy ant (Nylanderia fulva) is an invasive species described as an ‘ecological wrecking ball’ because it drives out native insects and small animals.

According to experts, they not only eliminate populations of other ants, but can kill chickens by blocking their nasal cavities, causing them to die of asphyxia.

The species – referred to as ‘crazy’ because of its quick, unpredictable movements –  originated in Argentina and Brazil but has caused chaos during its spread across the US in the last 20 years.

Now, researchers in Texas have demonstrated how to use a naturally occurring fungus, called microsporidia, to decimate local populations of crazy ants. 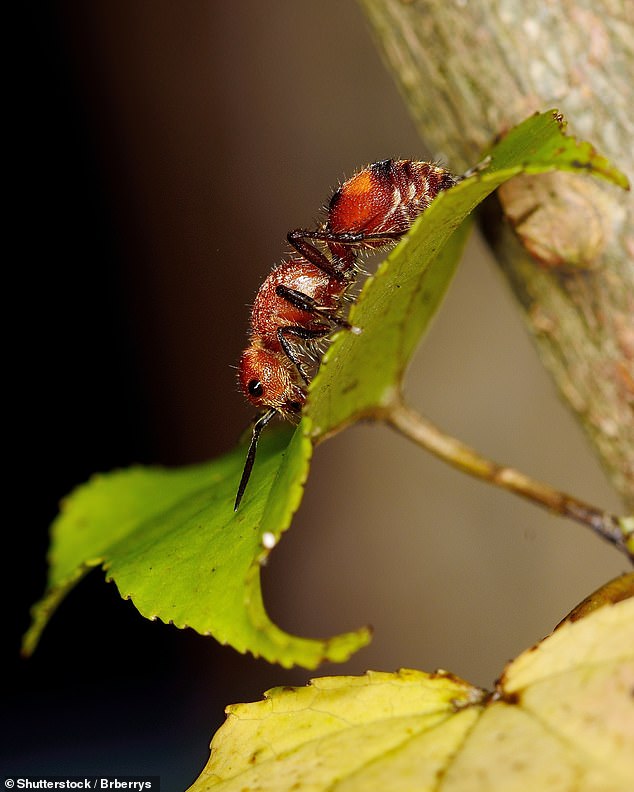 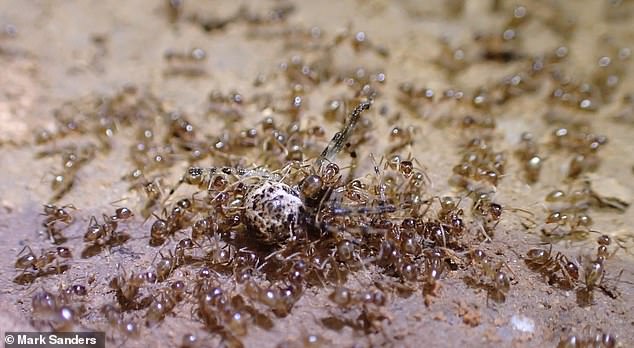 The tawny crazy ant (Nylanderia fulva) is a species of ant originating from South America.

The species has quick, unpredictable movements and a reddish-brown colour. It’s about one-eighth of an inch long.

The tawny crazy ant is unlike other frequently encountered ant species since they do not possess a stinging mechanism used for protection.

So, rather than sting, the species emits chemical compounds that protect them from attack by other insects. While capable of inflicting a bite, these ants only cause mild pain which quickly diminishes.

The insects, bizarrely, are attracted to electrical wiring and components and in one year alone caused $146.5 million in damages in Texas, ABC reported.

The devastation occurs when one ant discovers the transformer then gets electrocuted when it touches it, and ‘waves its abdomen in the air’ omitting a certain scent.

The scent lures for ants to the scene and they too are electrocuted, again sending the scent into the air to attract their friends.

Eventually, there are so many dead ants that the electric switches get stuck or the insulation fries and the system shuts down.

First found in the US back in Houston in 2002, scattered infestations are now found in all Gulf coast counties.

Individual infestations can be huge, spanning kilometers in diameter, according to Brackenridge Field Laboratory.

It is sometimes called the ‘Rasberry crazy ant’ in Texas after the exterminator Tom Rasberry, who noticed that the ants were increasing in numbers in 2002.

The study has been led by Edward LeBrun, a biologist at the Brackenridge Field Laboratory in Austin, Texas.

In some parts of the state, homes have been overrun by the ants swarming breaker boxes, AC units, sewage pumps and other electrical devices, causing short circuits.

‘I think it [the fungus] has a lot of potential for the protection of sensitive habitats with endangered species or areas of high conservation value,’ LeBrun said.

‘It’s impossible to predict how long it will take for the lightning bolt to strike and the pathogen to infect any one crazy ant population.

‘But it’s a big relief because it means these populations appear to have a lifespan.’

About eight years ago, LeBrun and Rob Plowes, also at the Brackenridge Field Laboratory, were studying crazy ants collected in Florida when they noticed some had abdomens swollen with fat.

When they looked inside their bodies, they found spores from a microsporidian, a group of fungal pathogens – a species new to science.

It’s not clear where the pathogen came from, although it may have been from the tawny crazy ants’ native range in South America or from another insect.

LeBrun and his colleagues later found the pathogen in 15 local populations of crazy ants across Texas.

Every population that had harbored the pathogen declined, and 62 per cent of these populations disappeared entirely.

‘You don’t expect a pathogen to lead to the extinction of a population,’ LeBrun said.

‘An infected population normally goes through boom-and-bust cycles as the frequency of infection waxes and wanes.’

The ant colonies may have collapsed because the pathogen shortens the lifespan of worker ants, making it hard for a population to survive through winter.

Thankfully, the pathogen appears to leave native ants and other arthropods unharmed, making it a seemingly ideal agent for ‘biocontrol’.

The team deployed the pathogen this way after LeBrun got a call from Estero Llano Grande State Park in Weslaco, Texas, in 2016.

The park was losing its insects, scorpions, snakes, lizards and birds to tawny crazy ants,’ he said. ‘Baby rabbits were being blinded in their nests by swarms of acid-spewing ants.

‘They had a crazy ant infestation, and it was apocalyptic, rivers of ants going up and down every tree. 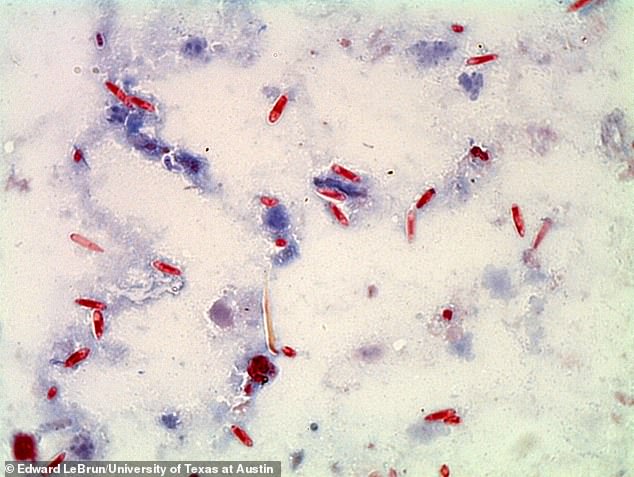 ‘I wasn’t really ready to start this as an experimental process, but it’s like, OK, let’s just give it a go.’

Using crazy ants they had collected from other sites already infected with the microsporidian pathogen, the researchers put infected ants in nest boxes near crazy ant nesting sites in the state park.

They placed hot dogs around the exit chambers to attract the local ants and merge the two populations.

In the first year, the disease spread to the entire crazy ant population in Estero, Florida, and within two years, their numbers plunged.

Now, the tawny crazy ants are non-existent in the area, according to the researchers, and native species are returning. 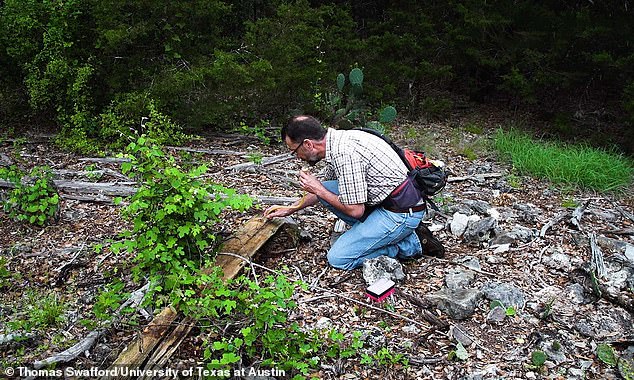 Edward LeBrun, a research scientist with the Texas Invasive Species Research Program at The University of Texas at Austin’s Brackenridge Field Laboratory, collects tawny crazy ants at a field site in central Texas

The team have since eradicated a second crazy ant population at another site in the area of Convict Hill in Austin.

They now plan to test their new biocontrol approach this spring in other sensitive Texas habitats infested with crazy ants.

Their study has been published today in the journal Proceedings of the National Academy of Sciences.

In 2017, scientists genetically engineered ants to lack their sense of smell.

This affected the insects’ ability to communicate, forage or compete to be a queen, as their antennae and brain circuits failed to fully develop.

Such odours are used to spread alarm as a predator approaches, leave a trail to food, indicate social status, and signal readiness to mate.

Ants can receive such signals because they have proteins called odorant receptors on their antennae, with each protein the right shape to bind to a specific odorant chemical.

For any odour or pheromone to be processed in an ant’s brain, however, both the right odorant receptor protein and a shared, common partner protein called Orco must be present.

The team successfully engineered the genetic loss of Orco protein, which resulted in ants that could no longer perform some, if not all, pheromone-based social interactions.

Specifically, the altered young ants, unlike their nestmates without the changes, spent much of their time wandering out of the nest. They failed to interact with other members of the colony (a behaviour called ‘space cadet’), and were unable to forage and bring food back to the nest.

Also, mutant females no longer groomed males, a pre-mating behaviour. The current study focused on the Indian jumping ant, Harpegnathos saltator, which is unlike many ant species in which only the queen can mate and pass on genes to the next generation.

Any Harpegnathos female, adult worker can be converted into a ‘queen-like’ gamergate in the absence of the queen. This is because the queen secretes a pheromone that suppresses the ability of workers to mate and lay eggs.

If the queen is removed, the most aggressive females, after winning a series of antenna duels, undergo this transition, and can go on to produce progeny, which is essential for colony survival.

The 2017 study found that, without Orco, the females cannot process pheromones, which makes them much less likely to engage in dueling.