Barack Obama’s daughters enjoyed a heartwarming reunion — complete with dancing — outside of Los Angeles Airport on Wednesday after Malia was picked up by her younger sister, Sasha.

The sisters, who are both living in Los Angeles, were spotted at curbside pick-up, just over a week after Malia, 23, flew out of the airport. A source told DailyMail.com that she went to Atlanta, where her boss Donald Glover’s FX series ‘Atlanta’ is filmed.

Malia, who is a writer on Glover’s upcoming Amazon project, looked thrilled to see Sasha, 20, and they showed off their sisterly love as they danced in celebration of her return. 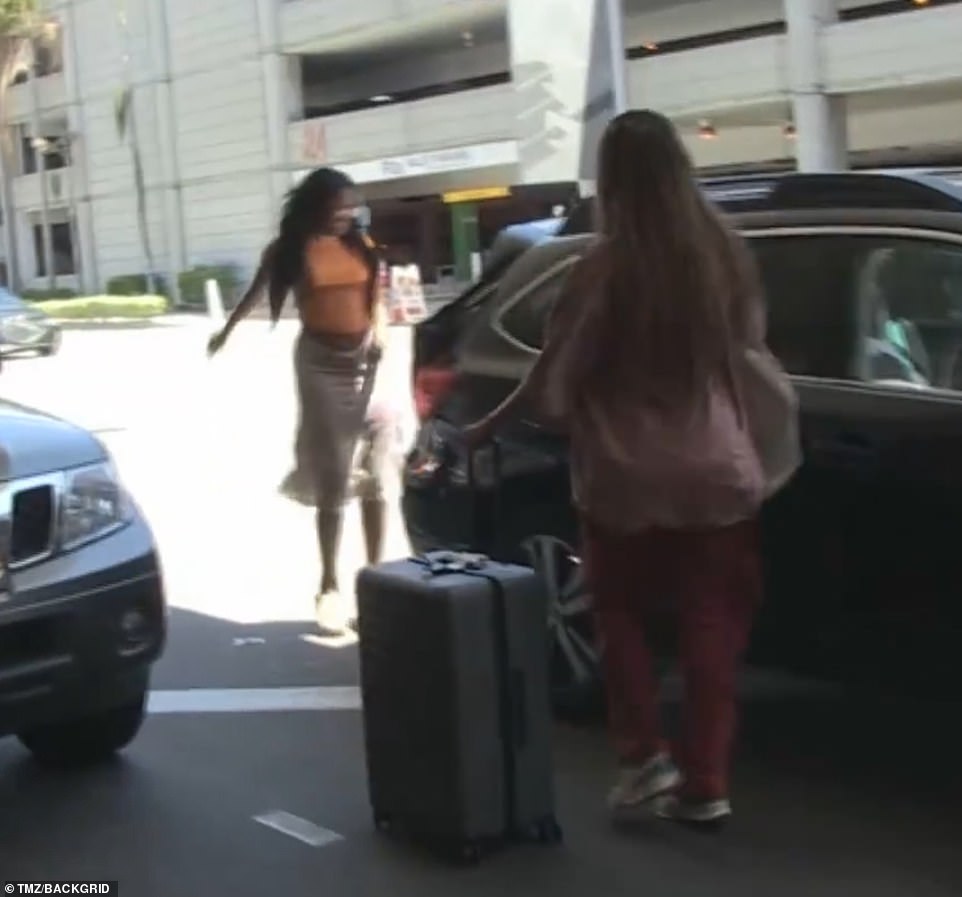 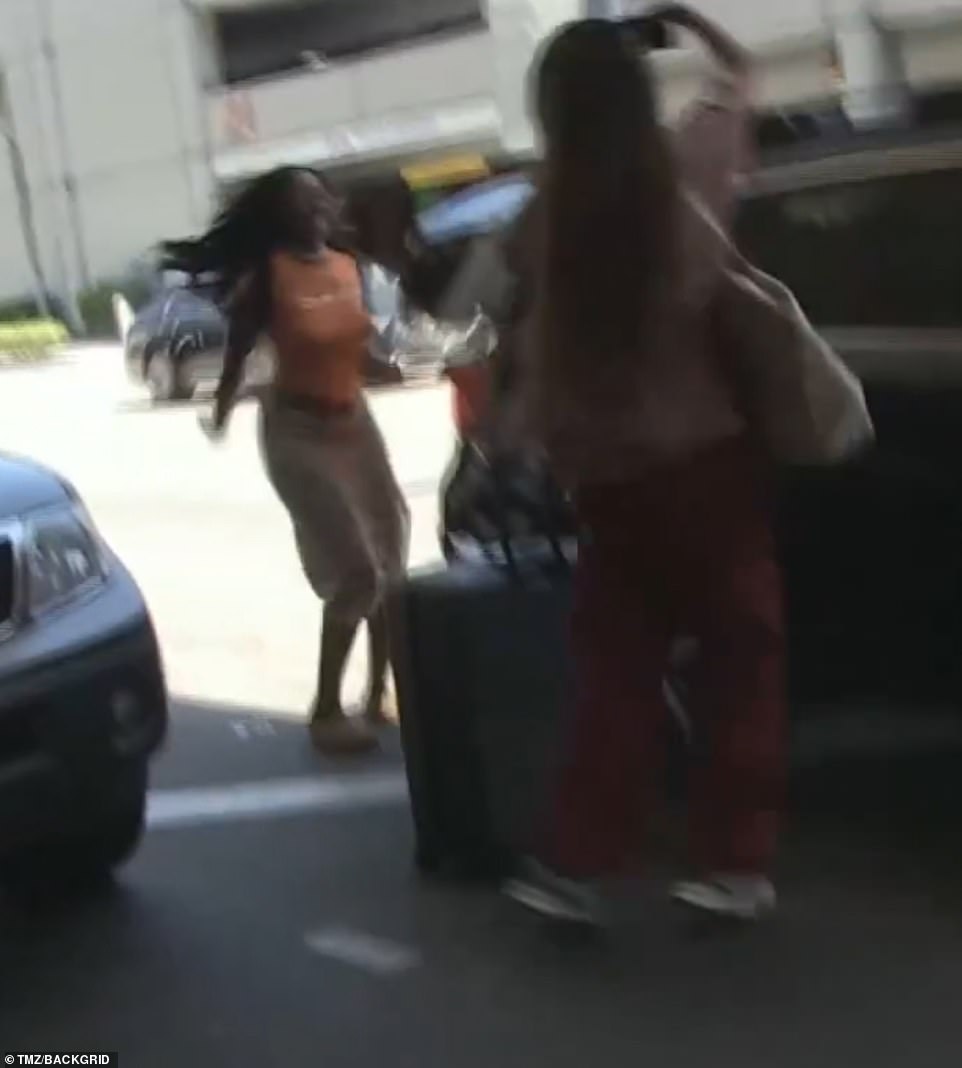 Sasha, 20, (left) looked excited to pick up her older sister, Malia, 23, (right), who flew out of the airport just over a week before

Footage of the moment shows the sisters jumping around and hyping each other up, saying, ‘Yas queen,’ over and over while they waved their arms in the air.

When they were done dancing, they leaned in for a hug before packing Malia’s luggage into the back of the vehicle.

Malia, who was still wearing her face mask, was dressed in the same baggy button-up and red cargo pants that she wore on her flight out of LAX on Sunday, May 1.

Her long micro braids were worn loose around her shoulders, and she topped off her look with white sneakers. Instead of a travel bag, she had a MA’O Organic Farms canvas grocery tote slung over her shoulder.

The bag was possibly a souvenir from her family’s recent holiday trip to Hawaii or a gift from her mother, Michelle Obama, who toured the organic farm in Waianae back in 2011 when she was first lady. 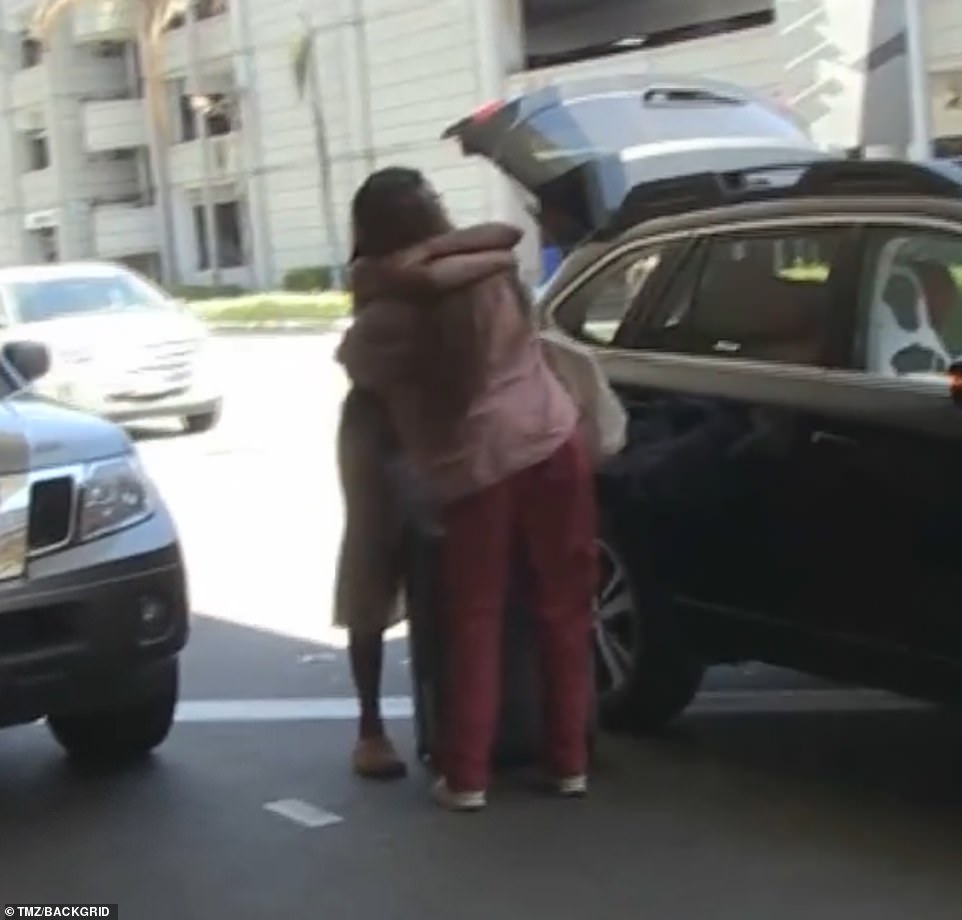 After doing a little reunion dance, the sisters leaned in and shared a hug 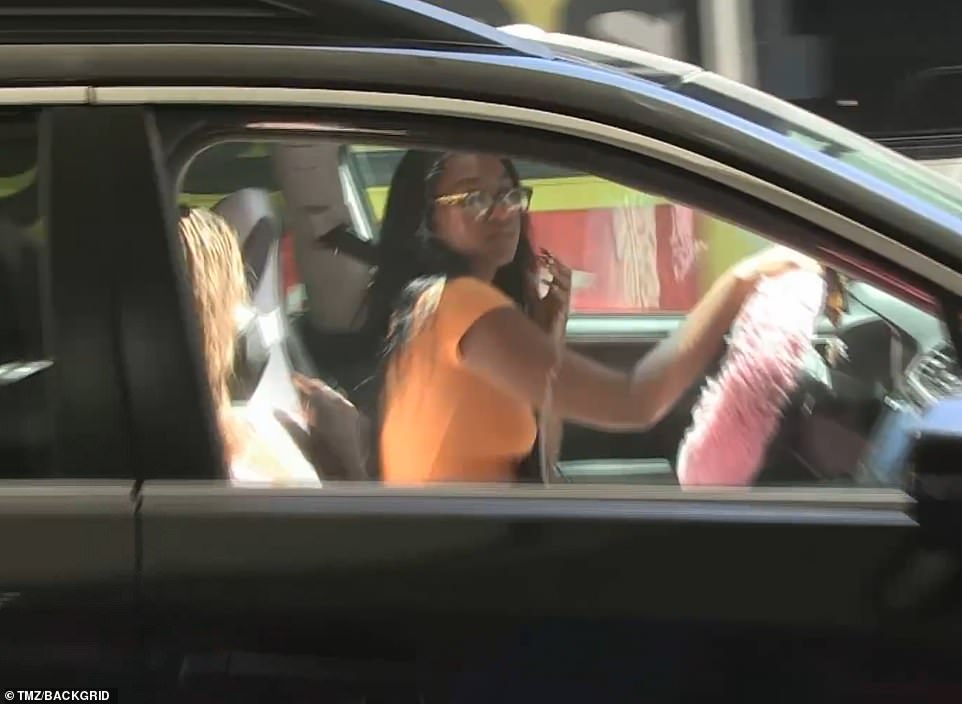 Sasha, 20, picked her sister up in a black hatchback, which she accessorized with a fluffy pink steering wheel cover

Meanwhile, Sasha was the epitome of a California girl in a cropped orange T-shirt and a midi skirt. She also had on glasses for the drive to the airport.

After helping her older sister with her luggage, she hopped in the front seat of her hatchback, which she accessorized with a fluffy pink steering wheel cover.

Malia was seen by herself at LAX on May 1 ahead of her flight. She was photographed going through TSA and checking her own luggage.

She moved to Los Angeles to pursue her career as a screenwriter and was rumored to be working with Glover on his latest project, which he later confirmed.

In March, Glover shared that he had given Malia her first post-college job as a writer on his new Amazon series, gushing that she is ‘amazingly talented’ and ‘really focused.’

The multihyphenate, who is also known by his stage name Childish Gambino, was at the season three premiere of ‘Atlanta’ when he opened up about he recruited the Harvard University graduate to work in the writers’ room on his latest project.

The actor is writing and executive producing the upcoming Amazon series — potentially titled ‘Hive’ — that is reportedly about ‘a Beyoncé-type character.’

Glover did not reveal how Malia — who interned on Lena Dunham’s HBO series ‘Girls’ in 2015 and at The Weinstein Company in 2017 — landed the job after she graduated from college last year. 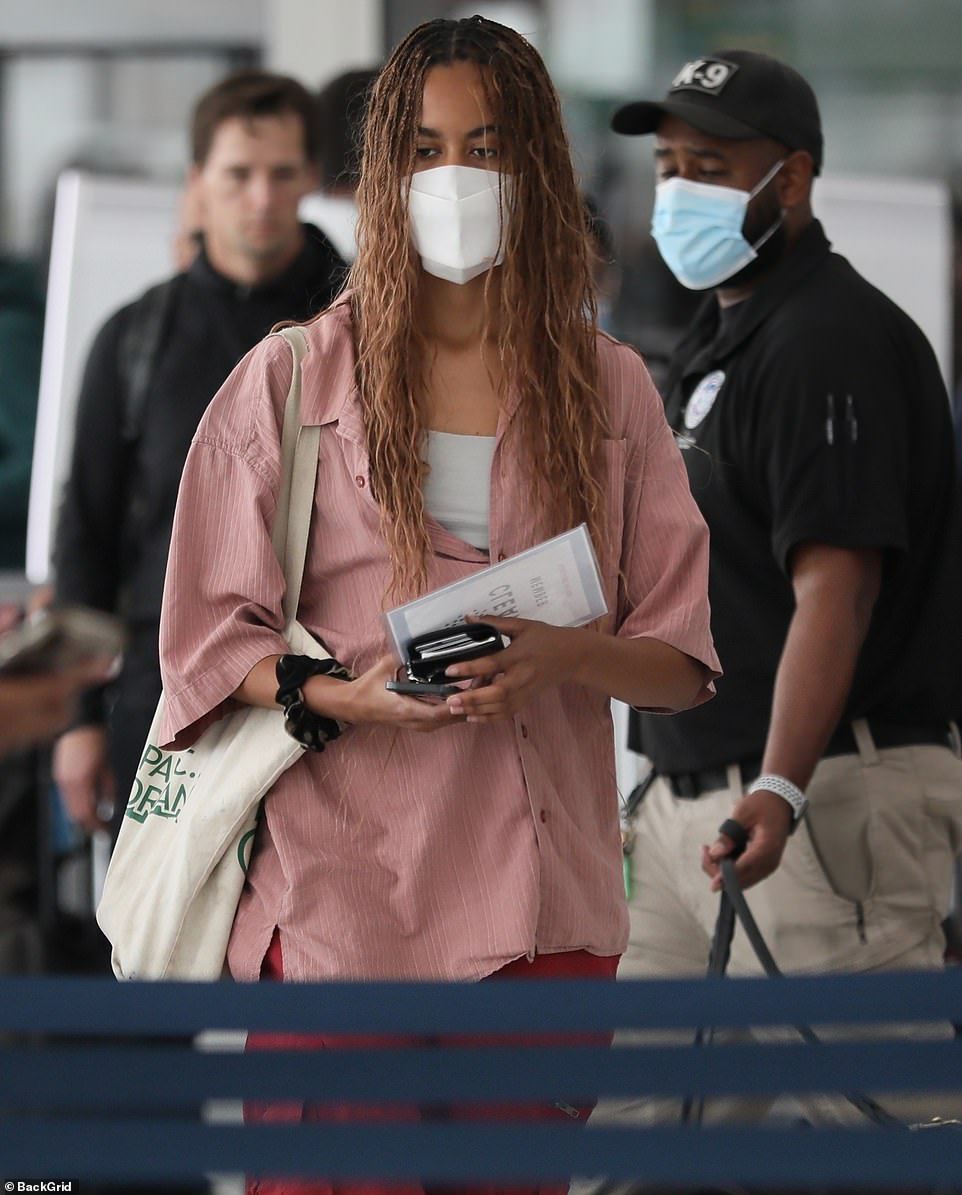 Malia was seen checking her luggage and going through security at LAX on Sunday, May 1 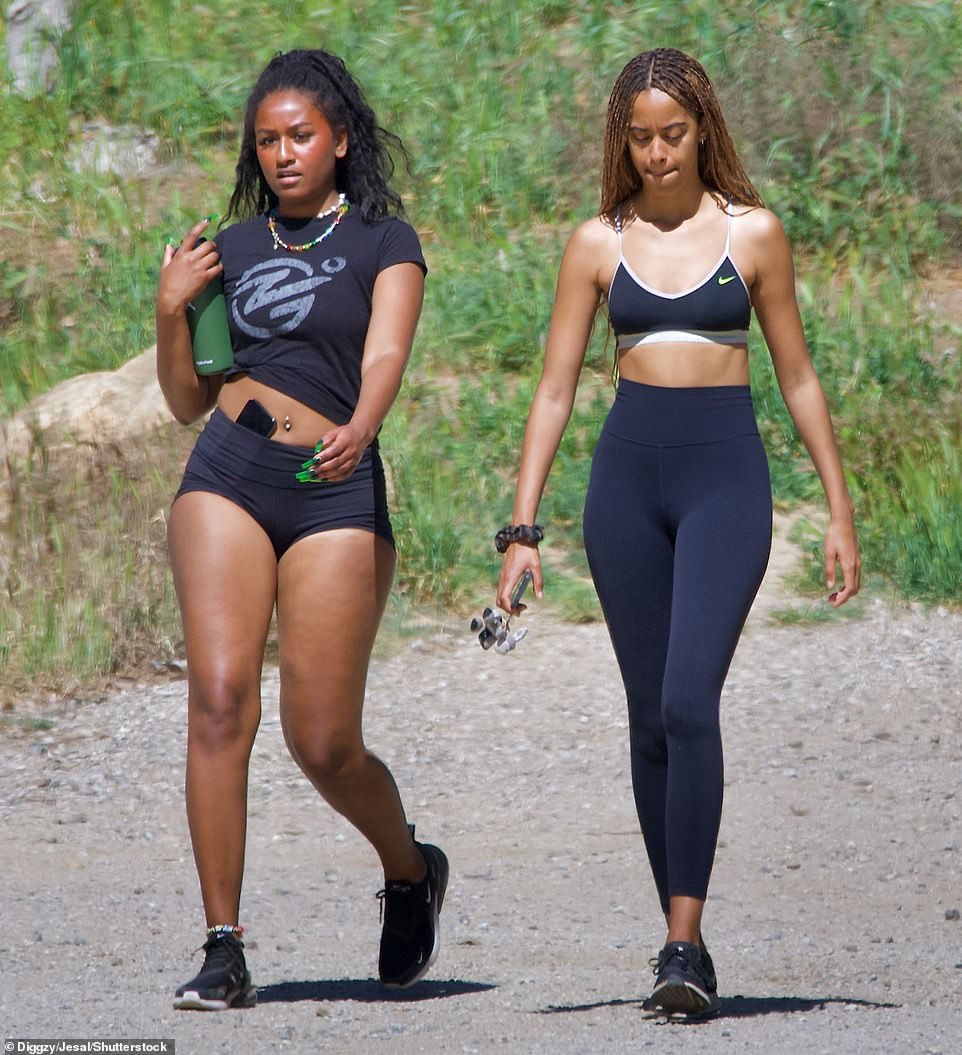 Sasha and Malia embraced another beloved Los Angeles pastime in March, when they stepped out for a sun-filled hike together 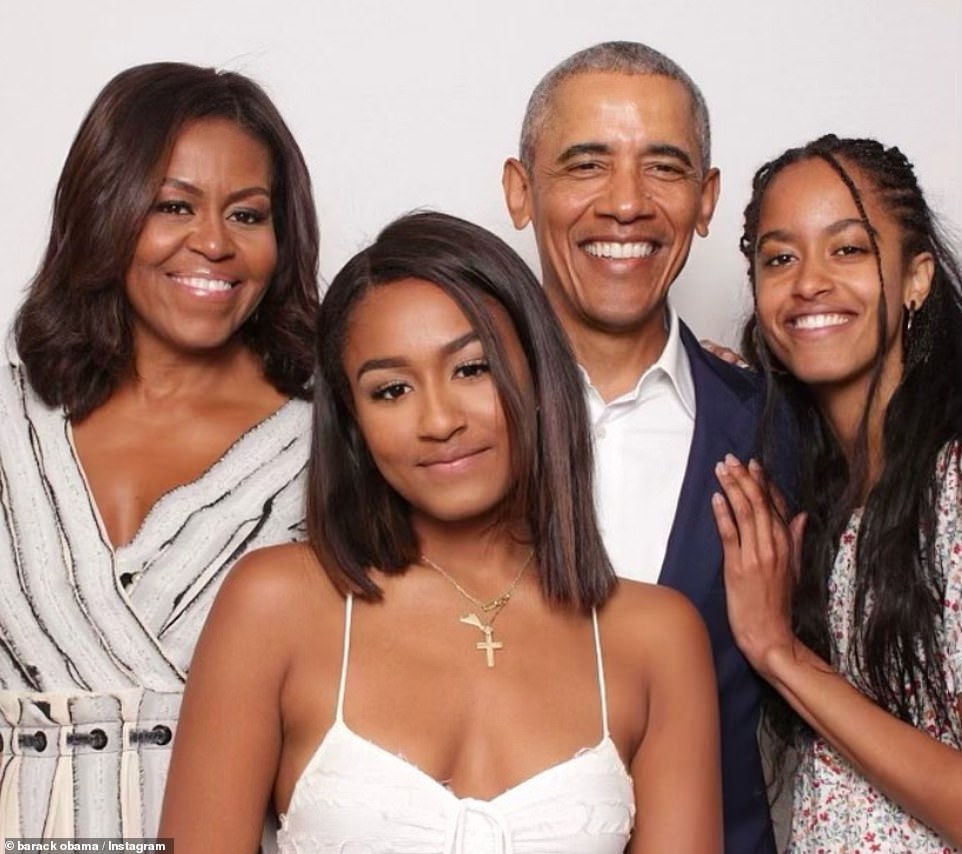 His younger brother Stephen Glover is also working on the upcoming Amazon project, and he said they were interested in ‘hearing her stories and having her work with them,’ which suggests they may have approached her about the position.

Glover believes Malia has a promising future in the industry, telling the publication, ‘I feel like she’s just somebody who’s gonna have really good things coming soon.’

‘Her writing style is great,’ he added.

Malia also earned praise from Stephan. The ‘Atlanta’ co-writer and executive producer commended her work ethic and ideas, saying they are happy to have her on the team because of her perspective.

‘Donald always says perspective is important, and people with different perspectives are important for a writers’ room. And for sure, she definitely has a unique perspective on everything,’ he told Vanity Fair.

When asked how he goes about rejecting Malia’s pitches, he made it clear that she isn’t getting any kind of special treatment in the writers’ room because of who her parents are.

‘Well, you know, we just hurt her feelings. We can’t be easy on her just because she’s the [former] president’s daughter,’ Stephan joked.

‘Nah, she’s very down to earth, and cool. So, it’s not a problem at all,’ he added. ‘She has a lot of good ideas. She’s great. She’s just a regular person like everybody else.’

Glover didn’t address whether Malia is joined by bodyguards when she is at work, but he did describe her days in the writers’ room as being like a therapy session.

‘We just talk about how we are feeling and what’s going on in our own lives, and so our work and all the shows we do becomes very personal in that way,’ he said. ‘And at the same time, it’s very fun. We are talking about everything and being honest about things, and getting all kinds of ideas out.’

While Malia is working as a screenwriter, Sasha has been building her own life in Los Angeles. She is reportedly a student at the University of Southern California after transferring from the University of Michigan.

DailyMail.com exclusively revealed last month that she is in a relationship with Clifton Powell Jr., 24, the son of ‘Ray’ actor Clifton Powell.

Powell and Sasha are understood to have met after she relocated to the West Coast, and he is already close with the family. He was seen hanging out  with Malia in a park last month.