The Nintendo Switch OLED gaming device comes with the same specifications as the previous model. However, the biggest and most important upgrade is the transition from an LCD screen to an OLED screen which greatly improves the gaming experience.

Once you turn on the portable gaming device you can immediately notice the difference from the previous model. It comes with a larger and brighter 7-inch OLED screen. This is an increase compared to the previous screen size of 6.2 inches.

The device measures 102 x 242 x 13.9 millimeters and weighs 420 grams with the included joystick. That’s 22 grams more than the previous model.

The screen is the most notable upgrade, especially if you’re playing games with a complex interface like Fire Emblem: Three Houses.

Although the screen resolution is the same as in the previous base model. But the gaming elements look brighter and more vibrant.

And the OLED screen improves gameplay in manual mode. And they make it very easy to play games in direct sunlight. Furthermore, a larger screen makes text appear across the screen larger.

The device comes with a new feature not found in previous models called Console-Screen Colors that is enabled by default. But it can be turned off through the settings menu.

This feature has both a default and a standard option that serves one purpose of increasing brightness and color saturation especially in light colors. As a result, games like Animal Crossing: New Horizons look noticeably brighter. Giving brightly colored items and clothes a lot more color.

However, the new device’s screen colors change how colors are displayed across the device itself, meaning it won’t affect docked mode even if you’re playing on an OLED TV screen. 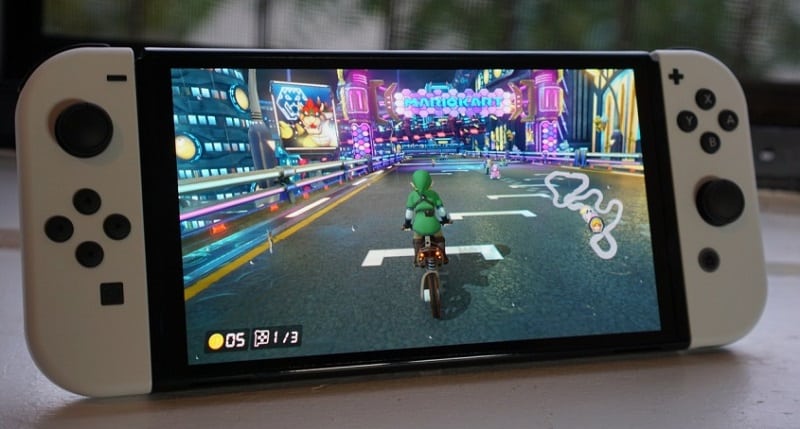 Other Important Upgrades for Nintendo Switch

Nintendo made some modifications to the design of the device as it put the microSD card slot port on the back. The power button comes in a rectangular shape instead of a round shape. However the biggest non-screen related upgrade is the kickstand.

The Nintendo Switch comes with a foldable metal kickstand approximately the width of the back of the device, and this kickstand provides more flexibility in terms of viewing angles.

The stand extends almost the entire length of the Nintendo Switch’s body and can be adjusted to any exact angle from nearly vertical to near flat. This should make sharing games on that screen even more fun.

The new kickstand comes with a more solid and flexible design, and provides more angles in which you can play games without fear of falling. This makes playing multiplayer games in tabletop mode a lot easier. 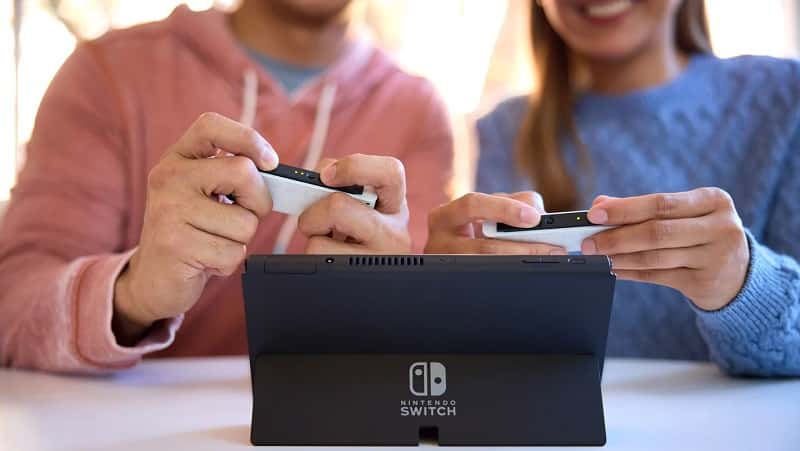 The company also improved the quality of the speakers, as they became louder with the presence of the usual headphone port. The company also added support for playing Bluetooth headphones via a driver update. The internal storage capacity is doubled to 64 GB, which you can expand to 2 TB using a microSD card.

The device has the same battery life as the previous model. As a result, you get between five and nine hours of gameplay on a single charge depending on the game and screen brightness settings.

The device comes at a price 345 dollarsIt is available in one colour, white. And if you want to play multiplayer games, you should subscribe to Nintendo Switch Online which costs $3.99 per month.

The service covers a lot of games that support playing online with other players and cloud saving for most of the games. And you can download game data saved via Nintendo servers And use it to sync with other Switch devices.

You can also back up your data to transfer to your new Switch if you plan to upgrade.

The Nintendo Switch is very suitable for gamers who mainly use it in handheld or tabletop mode. Thanks to the screen, speakers and a redesigned kickstand. However if you have a model previously and use it mainly in TV mode. It can be said that the upgrade is not absolutely necessary.

Get alerts when AirTags are left

Snapchat wants to make itself safer for teens
23 mins ago