The sister of King Philippe of Belgium, 59, is currently on a four-day economic trade mission to the UK alongside 400 participants representing 214 companies and organisations.

She took the time to travel to Oxford, where her niece Elisabeth, 20, has been studying history and politics at Lincoln College since October.

Together, they met with Professor Dame Sarah Springman, the Principal of St Hilda’s College and Professor Louise Richardson, Vice-chancellor of the University of Oxford. 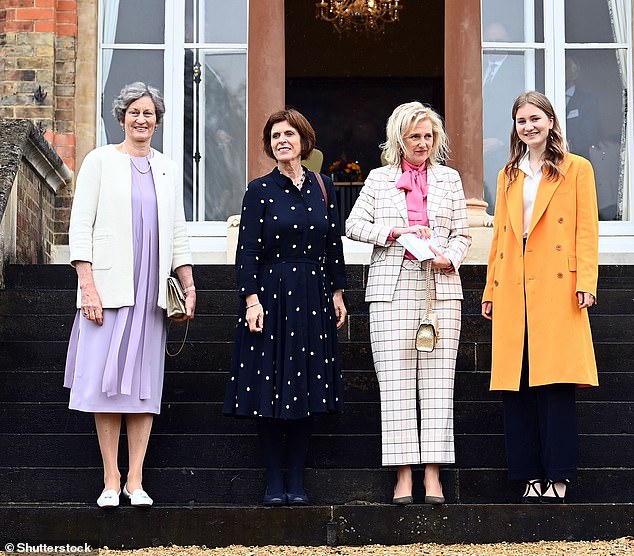 Princess Astrid of Belgium, 59, visited her niece, Crown Princess Elisabeth of Belgium, 20, at Oxford University today. Together, they met with Professor Dame Sarah Springman, the Principal of St Hilda’s College and Professor Louise Richardson, Vice-chancellor of the University of Oxford (left)

For her Oxford detour, Astrid, who met with the Prince of Wales yesterday, opted for a stylish checked white and pink suit, which she paired with a pink blouse tied with a loose bow at the neck.

She completely the trendy get up with dark grey slip-on stilettos and a shiny golden clutch bag.

The stylish Princess opted for a natural makeup, with just a dash of foundation and blush highlighting her healthy glow and a pink lip completing the look.

Her blonde locks were styled in a straight bob and she kept her accessories to a minimum. 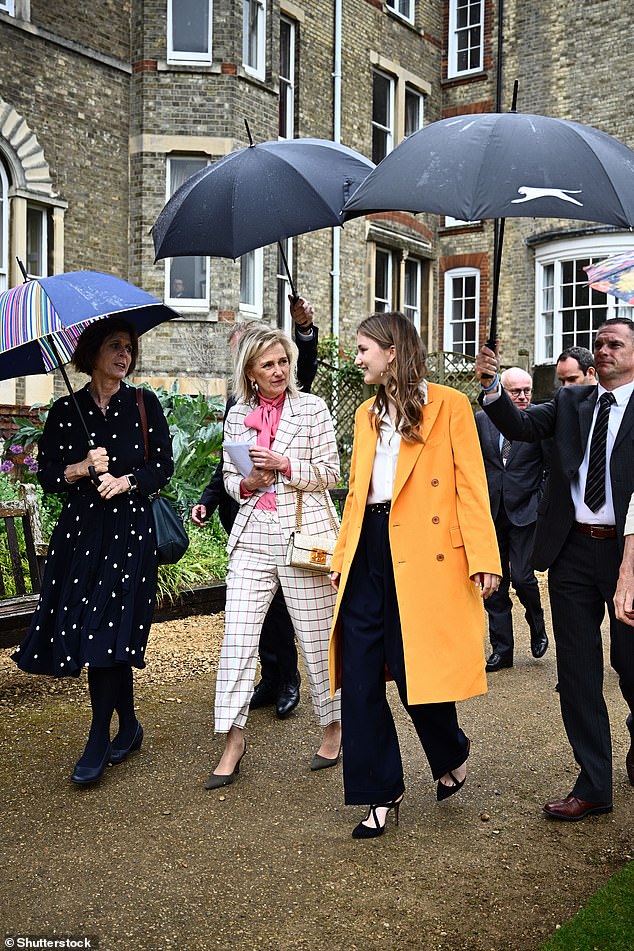 Aunt and niece walked together around Oxford during the visit. Princess Astrid is on Day Three of her four-day visit to the UK

Meanwhile, her niece opted for an eye-catching yellow coat, which she wore over a business-ready pair of wide-legged and high waisted black trousers she paired with an apt white Oxford shirt.

She was seen strutting by her aunt’s side in a pair of black swede stilettos.

The princess’s locks were styled in delicate dark blonde waves cascading down her shoulders, which matched her gold dropped earrings.

The fresh-faced royal, who is first in line to the Belgian throne, decided to go sans makeup for the meeting.

Astrid was greeted by Professor Dame Sarah Springman, who was wearing a tasteful lilac dress with a long white jacket. 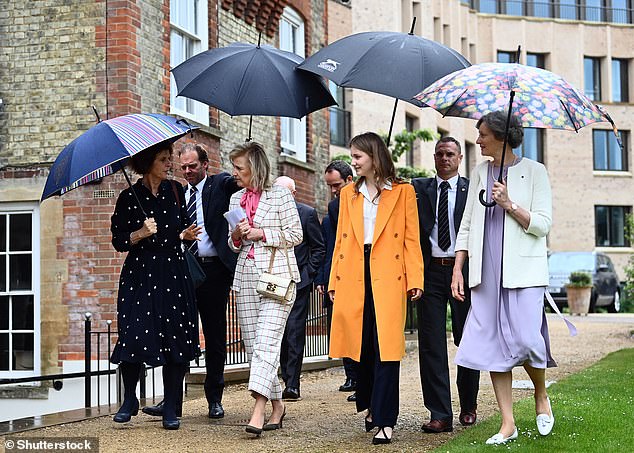 As their security detail held out umbrellas for them, the two Princesses chatted with the university high ranking staff members

In spite of the rain, and with Astrid’s security detail holding out umbrellas, the foursome looked in good spirits.

Yesterday, on the second day of the economic mission, Astrid met with Prince Charles, 73, before his historical address to the Parliament.

For the occasion, she donned an animal print midi dress with matching heels and a sophisticated blow dry.

High achieving Elisabeth has been juggling her Oxford studies with her military training back home.

The future queen spent the last weekend of her Easter holiday at a training course in Leopoldsburg, near the Dutch border back in April.

This summer Elisabeth will return to Belgium for a camp run by the the Royal Military Academy (RMA), the university of the Belgian Defense, responsible for the academic, military and physical training of its future officers. Yesterday, on Day Two of her visit, Astrid met with Prince Charles, 73, before his address to the parliament

Elisabeth enrolled in a course with the RMA in September 2020 and remains involved in training despite being a full-time first-year student at Oxford.

The balance of academic and military experience is regarded an essential foundation for her future life as queen.

Elisabeth is the eldest daughter of King Philippe of Belgium, 62, and his wife, Queen Mathilde, 49. The couple also share sons Prince Gabriel, 18, and Prince Emmanuel, 16, and daughter Princess Eléonore, 14.

The princess completed her secondary education at UWC Atlantic College in South Wales – based at a 12th-century castle and dubbed the ‘Hippie Hogwarts’ – where she boarded for 18 months.

Spain’s Crown Princess Leonor, 16, and Princess Alexia of the Netherlands, 16, are both current students.