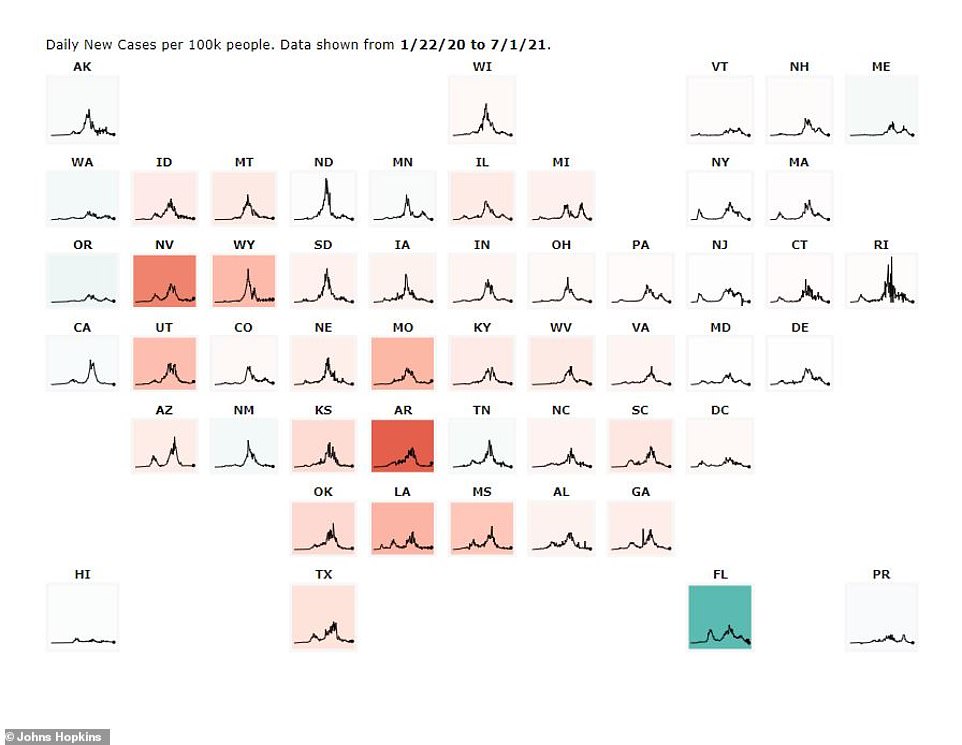 
Officials across the country are warning about a rise in COVID-19 cases as the U.S. prepares to celebrate Independence Day festivities.

States including Arkansas, Louisiana, Missouri, Mississippi and Nevada are reporting increases in infections by as much as 200 percent in the last two weeks.

All five states have among the lowest vaccination rates – fully vaccinating less than 45 percent of their populations – which is below the national average.

The variant has now been detected in every state, with South Dakota being the last to report a case linked to the strain, and Washington, DC – and, in some areas, it makes up more than three-quarters of all new infections.

Many doctors had hoped that the Fourth of July weekend would mark a return to normalcy but some health officials say it seems that the holiday will instead be the beginning of a third wave.

It comes as President Biden admitted that more lives will be lost to the Delta variant even as he encouraged Americans to enjoy their holiday weekend.

Local officials in several states, such as Arkansas, Louisiana, Missouri, Mississippi and Nevada, are reporting an increase in cases of COVID-19 ahead of July 4 weekend 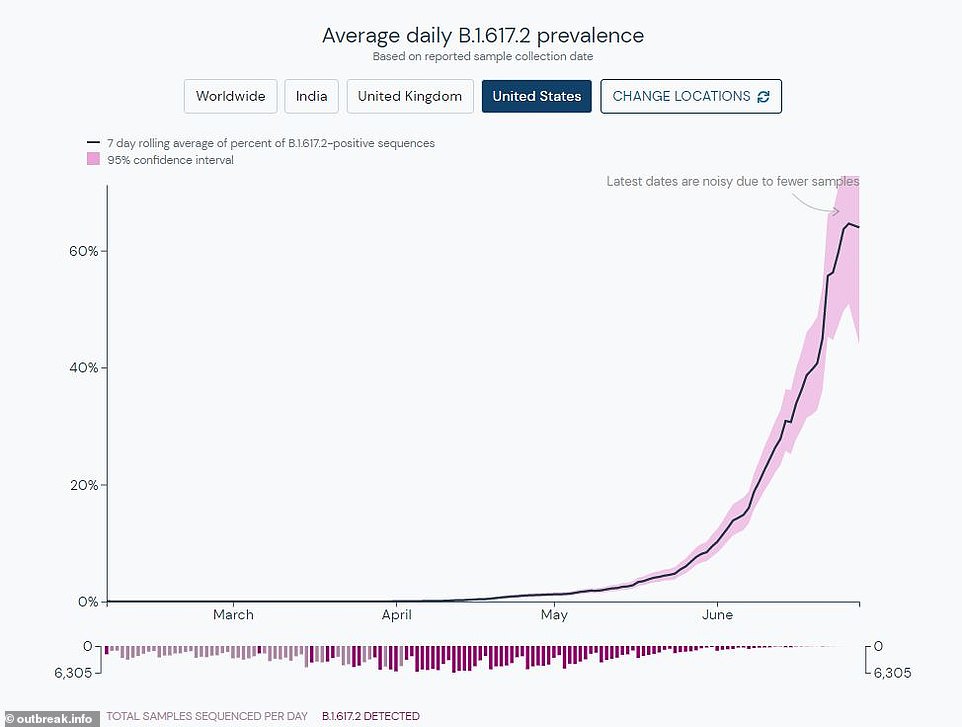 Health experts blame the Indian ‘Delta’ variant spreading, making up 26.1% of new cases in the country and as many as 77% of cases in some states 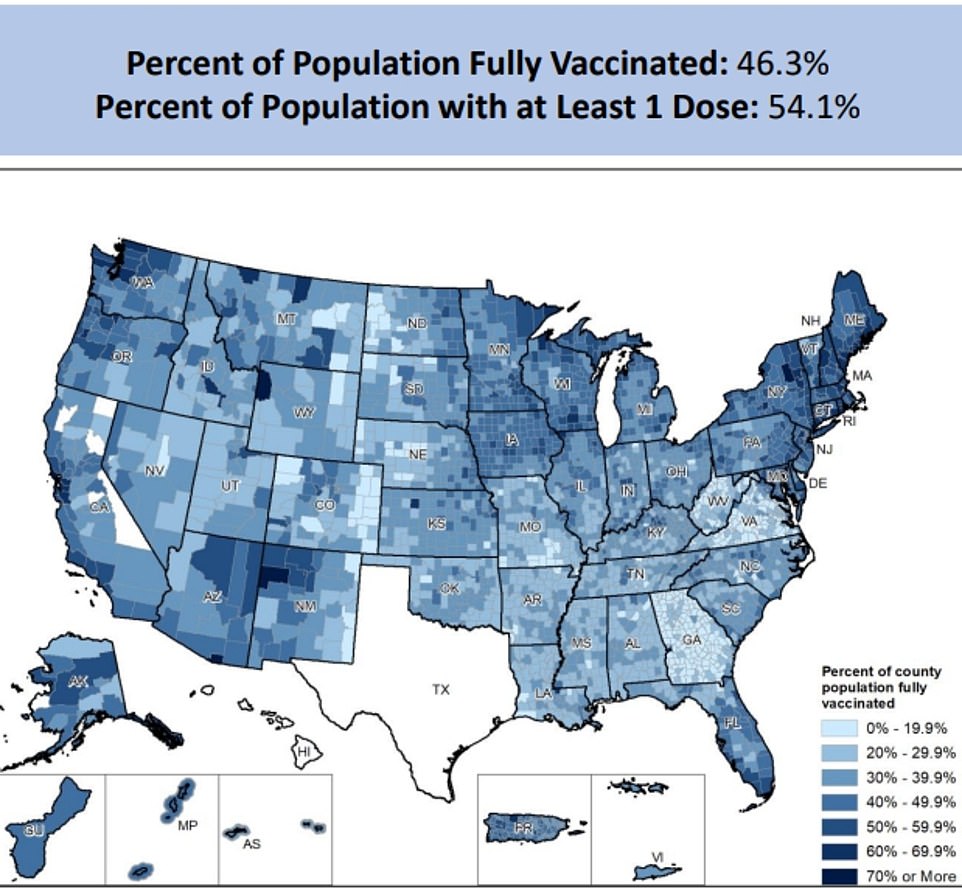 Arkansas is one of the states to see cases surge with a 202 percent rise from an average of 234 cases per day to 707 per day over the last two weeks, according to a DailyMail.com analysis of Johns Hopkins data.

‘We are now going in the wrong direction yet again with COVID10-19 infections here in the state of Arkansas,’ said Dr Cam Patterson, chancellor at the University of Arkansas for Medical Sciences, during a briefing on Tuesday.

‘With July 4th holiday coming up and eventually kids going back to school, we have to be concerned that this would be a trend that could continue.

‘And if it does, it would appear that we may be in the beginning of the third surge of COVID-19 here in the state of Arkansas.’

The Natural State has one of the lowest vaccination rates in the nation, having fully vaccinated just 34.5 percent of its population, according to CDC data.

During the briefing, Gov Asa Hutchinson said about 90 percent of cases are among unvaccinated people and – of the nearly 1,000 deaths recorded since January – 99.6 percent were unvaccinated individuals.

What’s more, over the course of 2021, Hutchinson said 98.3 percent of COVID-19 hospitalizations occurred in those who did not receive their shots.

‘The vaccine, as well as continued practicing of social distancing and masking when that is necessary, are our pathways out of a third surge of COVID-19,’ Patterson said.

This is helping give rise to the Delta variant.

Known as B.1.617.2, the Delta variant has been labeled as a ‘double mutant’ by India’s Health Ministry because it carries two mutations: L452R and E484Q.

L452R is the same mutation seen with the California homegrown variant and E484Q is similar to the mutation seen in the Brazilian and South African variants.

Both of the mutations occur on key parts of the virus that allows it to enter and infect human cells. 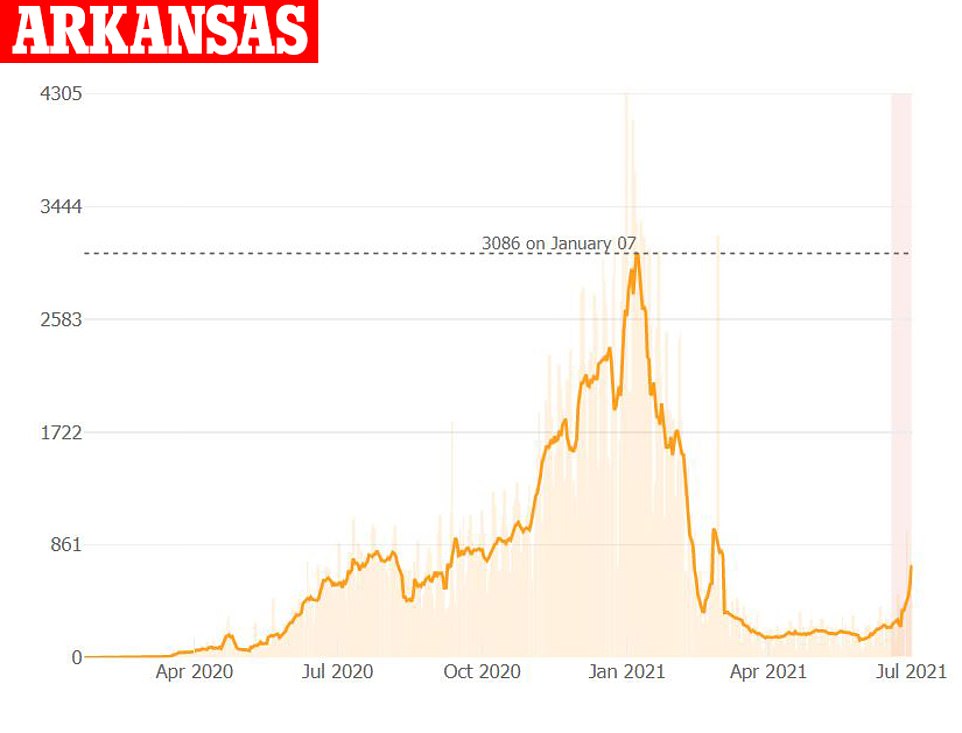 Arkansas has seen a 202% rise in infections from an average of 234 cases per day to 7070 per day over the last two weeks with just 34.5% of the total population vaccinated 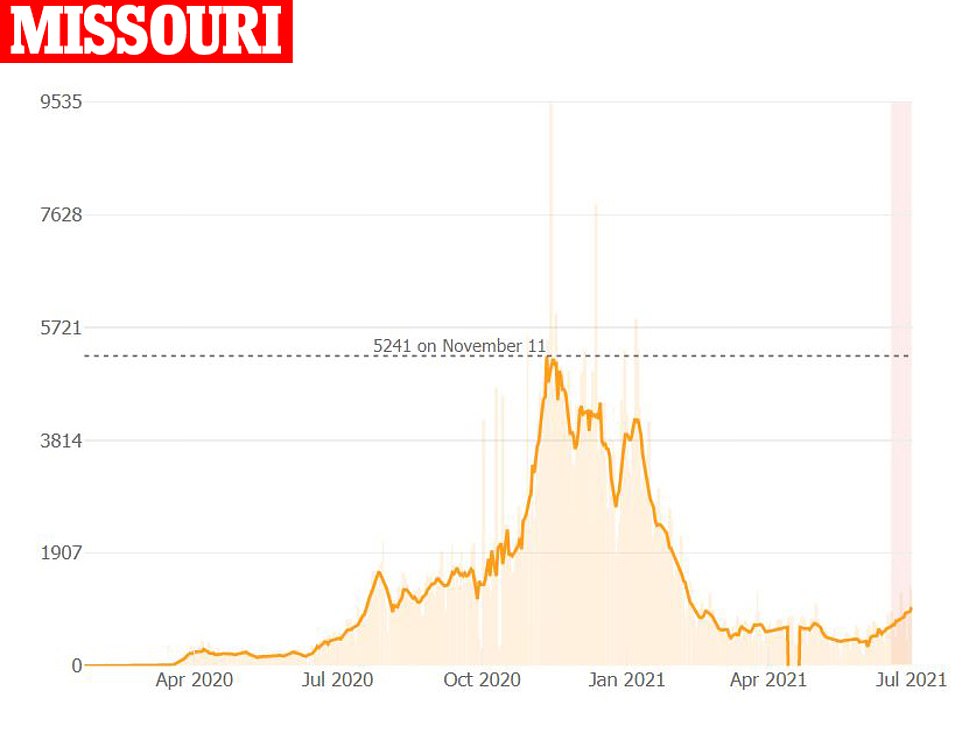 Missouri reported a 53% spike in coronavirus cases 648 per day to 996 over 14 days, with some cities reporting a jump in hospitalizations by a much as 225% 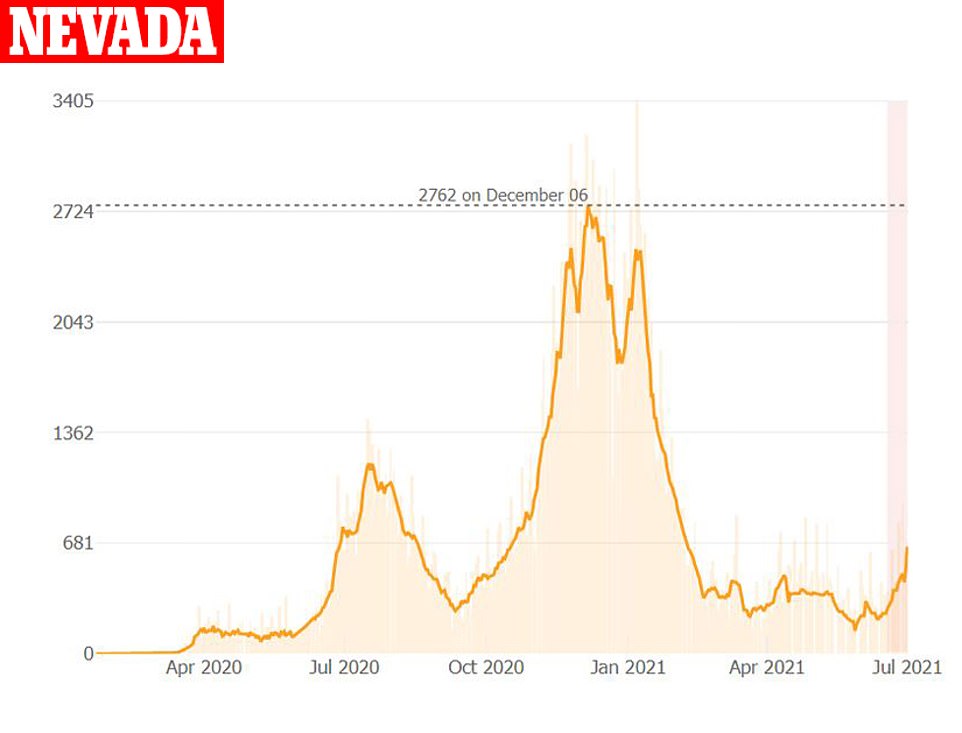 In the West, Nevada has a slightly higher vaccination rate even though cases have risen by 167% from 247 per day to 660 per day 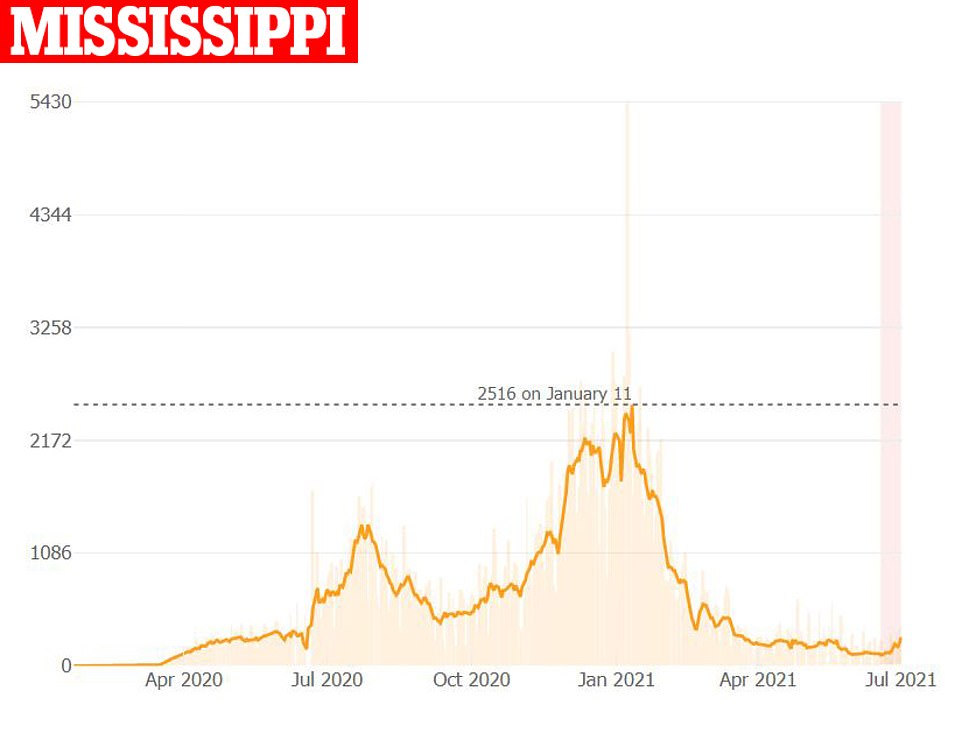 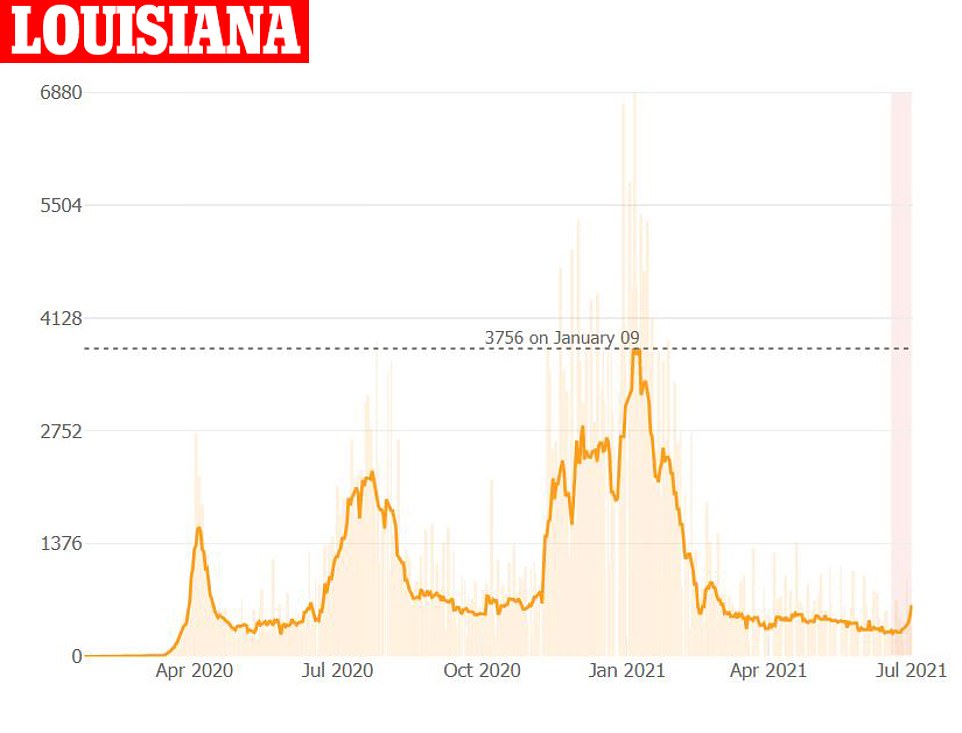 According to the Arkansas Times, out of 191 state samples submitted to the global database GISAID for genome sequencing, the variant was detected in nearly 30 percent.

Patterson said he expects that the variant will make up more than half of cases within the next week or two.

Meanwhile, in nearby Missouri, cases are also rapidly spiking from an average of 648 per day to 996 in the last two weeks, an increase of 53 percent, the DailyMail.com analysis found.

KSHB reported that the state recorded more than 15,000 new COVID-19 cases in June after reporting just 9,600 cases in May.

It also marks the most infections reported since March 2021 and ending six consecutive months of declines, according to the news station.

Officials blame the spread of the Delta variant among unvaccinated segments of the population. Most counties have seen fewer than 40 percent of residents receive at least one dose, and one county is as low as 13 percent.

However, 67 percent of new cases in the state between May 31 to June 14, according to a report compiled by the Institute of Social and Preventive Medicine at the University of Bern, in Switzerland, using GISAID data.

Steve Edwards, the CEO of CoxHealth hospitals, based in Springfield, said the city has seen a 225 percent rise in patients, almost all of whom are unvaccinated and encouraged residents to get their shots.

‘I would encourage anyone in a community that doesn’t have a strong number of variants, especially Delta, that the window is still open to protect yourself,’ Edwards told St Louis Public Radio. 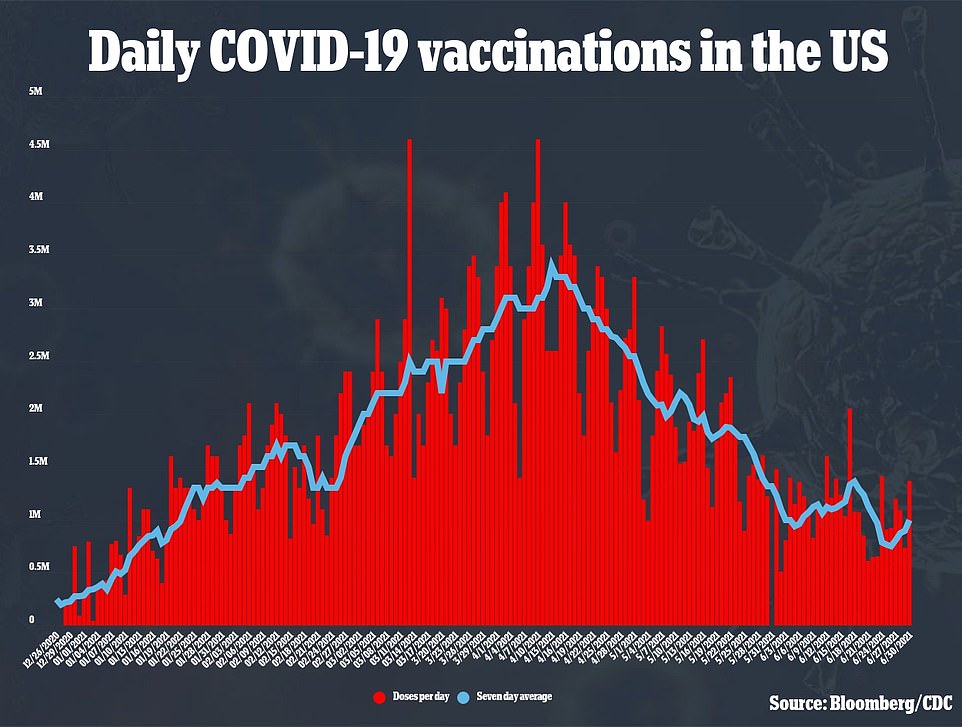 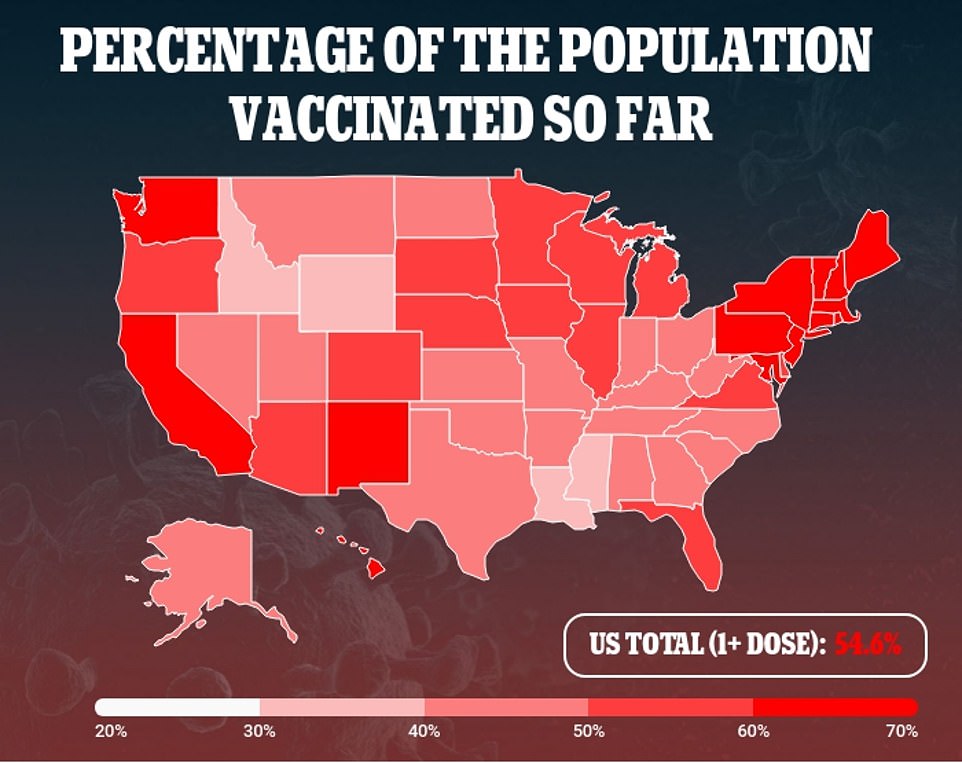 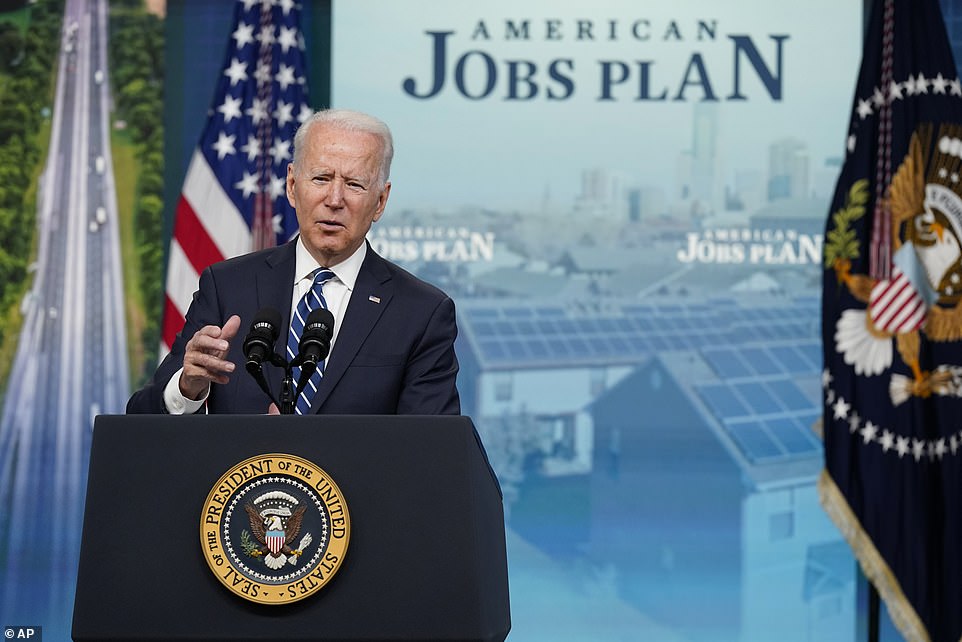 President Biden said: ‘I am not concerned there’s going to be a major outbreak, in other words that we’re going to have another major epidemic nationwide, but I am concerned that lives will be lost’

According to a release from the Nevada Hospital Association, hospitalizations have risen to about 250 with around 100 more patients than a week ago.

And, although vaccination rates are higher than in many Southern and Midwestern states with 45.3 percent fully vaccinated, the Delta variant is still spreading rapidly.

The report from the Institute of Social and Preventive Medicine shows that the variant accounts for 77 percent of new infections in the Silver State.

Health officials are now calling on more residents to step up and roll up their sleeves.

‘As our community began the process of reopening, this increase in cases is not unexpected. However, it is preventable,’ Dr Fermin Leguen, District Health Officer for the Southern Nevada Health District, said in a news release.

‘There are many preventive measures people can do to protect themselves from COVID-19 and to help keep the virus from spreading.

‘People who are not vaccinated should continue to wear face masks, or better yet, make an appointment to get the vaccine or stop by one of the many locations that accept walk-in patients.’

Meanwhile. President Biden admitted that more lives will be lost to the Delta variant even as he encouraged Americans to enjoy their Fourth of July holiday weekend.

Delivering an optimistic message at the White House on positive jobs numbers, he struck an uneasy balance as he warned of more COVID deaths ahead but played down worries that the Delta variant would turn back the clock to the worst days of the pandemic.

‘I am not concerned there’s going to be a major outbreak, in other words that we’re going to have another major epidemic nationwide, but I am concerned that lives will be lost.’ 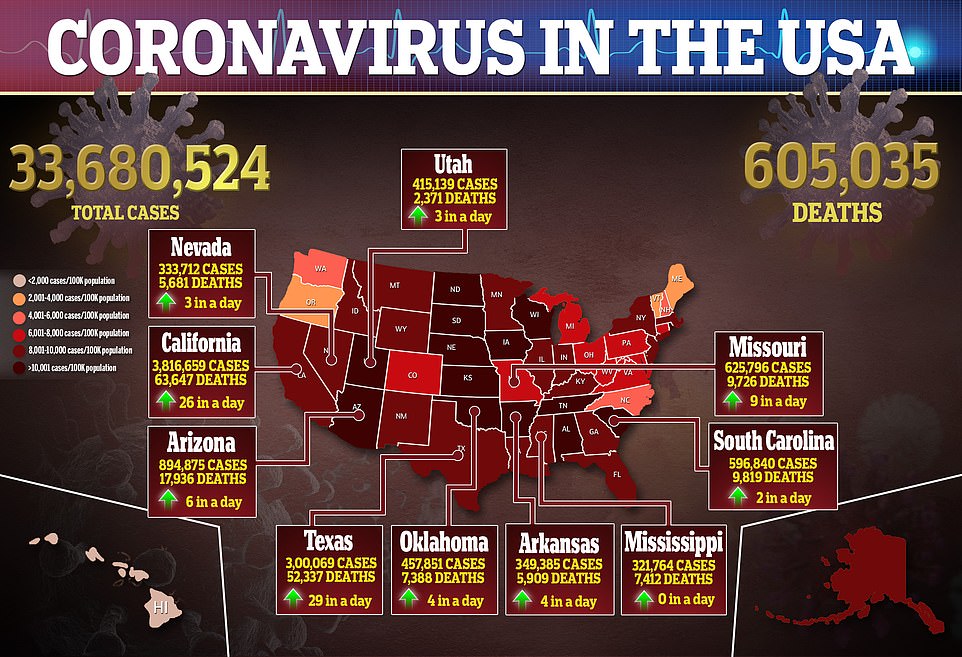 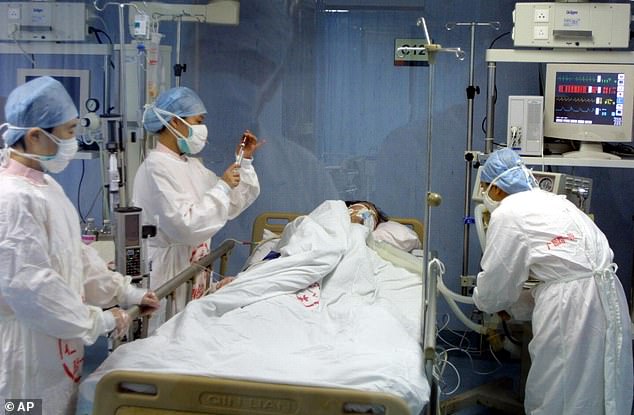 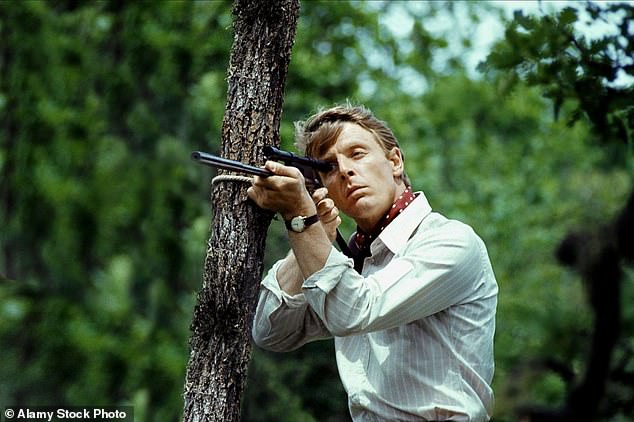 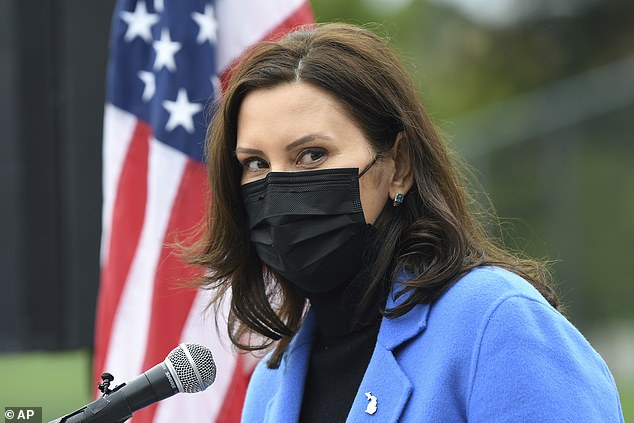 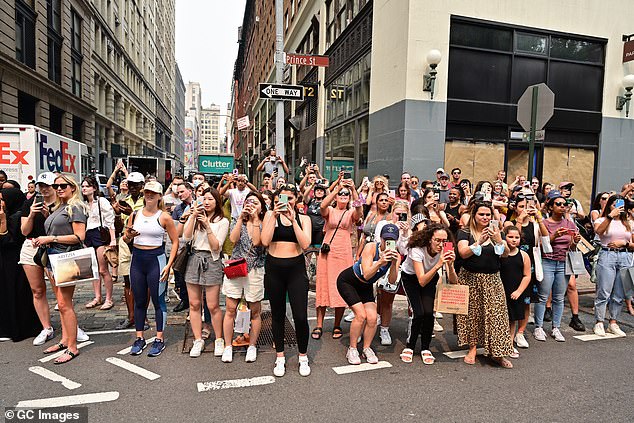