Shamed Miami mom covers her face as she leaves jail after being arrested for beating boy, 13, with a belt because he fought with her ‘bully’ son in school

By Jennifer Smith For Dailymail.Com

A Miami mother arrested for beating a little boy with a belt after he fought with her child was seen leaving jail covering her face in shame on Sunday.

Kady Sewell, 33, was arrested on Saturday after walking into her child’s school and beating Nehemiah Johnson, 13, with a belt.

Other kids from the school say Sewell’s child is a ‘bully’ who picks on other children and that he ‘fat shamed’ Nehemiah so he ‘picked him up and dropped him’. Kady Sewell, 33, was arrested on Saturday after walking into her child’s school and beating Nehemiah Johnson, 13, with a belt on Thursday. The attack was caught on surveillance footage 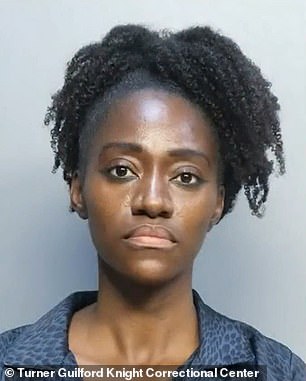 Sewell, 33, was arrested after the incident

Sewell is said to have entered the school to attack the child because her son told her he’d been fighting with him.

Surveillance footage at the school caught the beating the boy on Thursday morning at Bethel Junior Academy in Florida City.

The boy told Local News 10 that the child suffered injuries to his lip and arm.

Nehemiah’s mother, Zendre Pollard, said: ‘It was hard to watch.

‘I don’t want anybody’s child to go through anything like this.

‘It was very hard to watch.

‘I’m at the point where my child should have been protected. 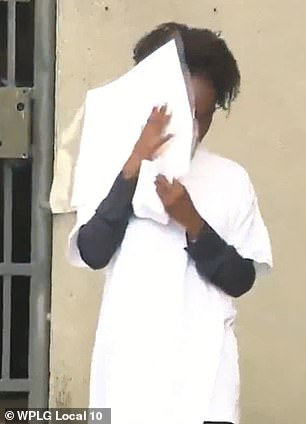 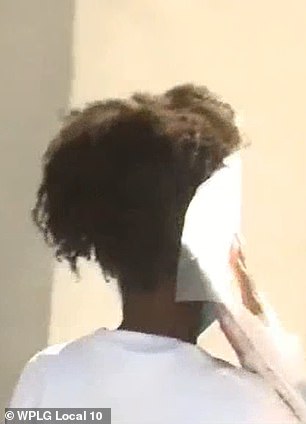 ‘How can a parent get that far and start swinging at my child?’

She called the police after her son told her what happened.

It is unclear why no one at the school stopped her from attacking the boy.

Sewell was booked on charges including child abuse, interference at an educational institution and trespassing at a school.

She attempted to cover her face with a large sheet of paper as she left jail on Sunday.

It’s unclear when her next court date is, or if she has any other children.

The school has not commented.

Casey White 'would rather die' than surrender when caught, former inmate claims