The father of former U.S. Marine Trevor Reed, who returned to Texas after being freed in a surprise prisoner swap with Russia last month, has revealed how Texas States Senator Ted Cruz did nothing to help bring him home.

Reed was detained in Russia in 2019. He was accused of assaulting a police officer while visiting his girlfriend in the country – something he has always denied.

His father, Joey Reed, made a point of thanking Senator John Cornyn and Reps. August Pfluger and Michael McCaul, but Cruz, perhaps the most high profile of Texas names, was missing from the list. 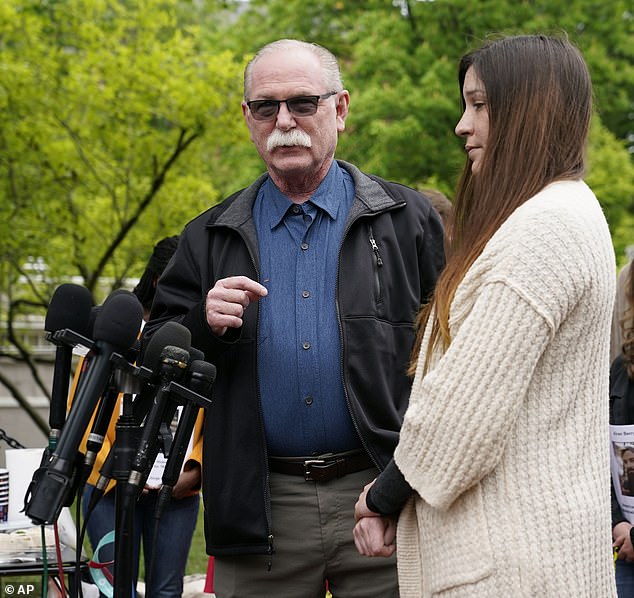 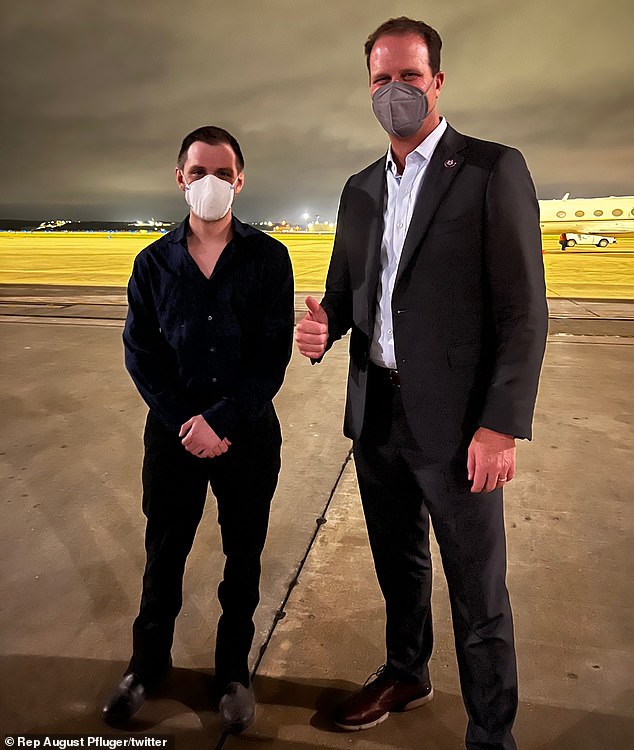 Trevor Reed arrives back in Texas on last month. He is shown with Rep. August Pfluger, who helped secure his release 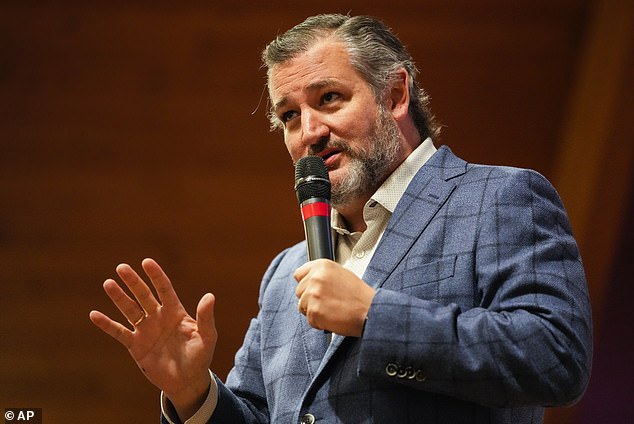 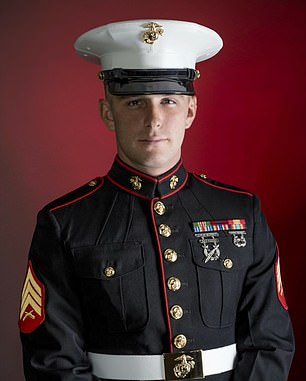 U.S. Marine Trevor Reed was detained in Russia in 2019

Reed has since given a frank assessment of Cruz’s efforts in an interview to the Dallas Morning News.

‘He didn’t do anything. He’s an embarrassment to the state of Texas, let me just say that. I don’t care what or who runs against him, I will work for their campaign to defeat that son of a b****.’

Cruz’s office has confirmed Reed’s account in part, noting that the senator did not take a stance in public out of concern that he might antagonize Russian President Vladimir Putin.

Cruz’s aides have suggested that he was in fact working behind the scenes.

‘We were repeatedly advised by Administration officials that my taking a public role in this specific case would be counterproductive, and that because of my role fighting to stop the Nord Stream 2 pipeline, leaders in Russia may well have linked the two issues. That would have endangered Trevor and delayed his release,’ Cruz said in a statement to The Dallas Morning News. 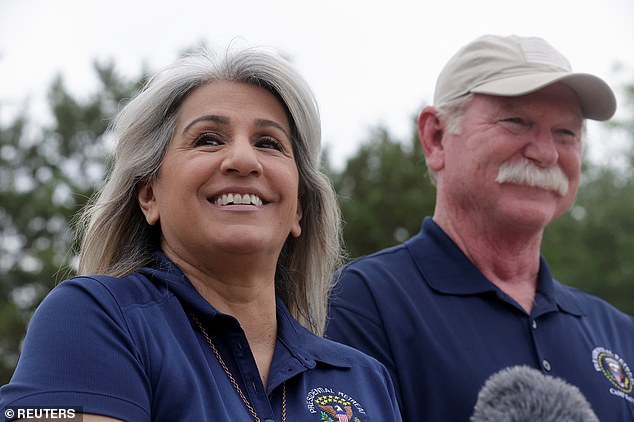 Paula and Joey Reed are shown outside their home in Granbury, Texas, last month after receiving the news that their son would be freed 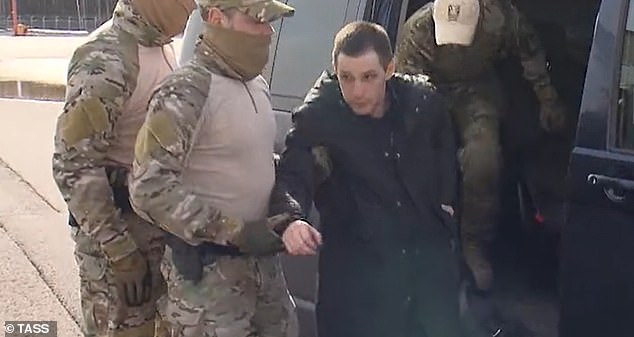 Footage posted online showed the moment Russian forces escorted Reed out of a dark-colored van, last month as he made his first steps toward freedom 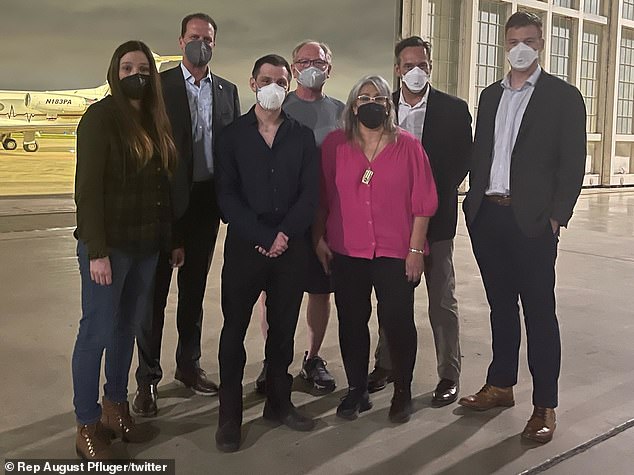 Trevor Reed (center in navy shirt) with his mother and father, Texas Rep. August Pfluger and others, pictured on April 28, after arriving back in Texas 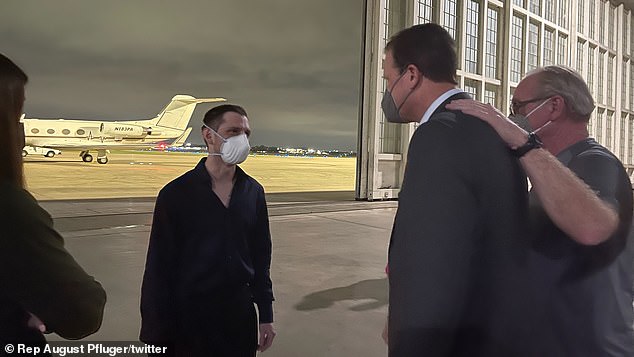 Trevor reed (left) is shown arriving back in Texas last month. He was freed in a dramatic prisoner swap. The Marine was jailed in Russia in 2019 while visiting a girlfriend. He was accused of assaulting a police officer but has always denied it

Cruz went on to defend the Reed family’s interpretation that he did nothing to secure Trevor’s release.

‘[I am] very sorry that Trevor’s family interpreted this as not prioritizing his release, and my heart breaks for them for having to endure all the pain of Trevor’s imprisonment … Fighting to free American hostages wrongly held by tyrannical governments is a deep personal passion, and I have spent my entire Senate career fighting to release Americans in captivity.

‘I would have eagerly taken a public role loudly calling for Trevor’s release, but I believed that the best way for me to help was to vigorously press the Administration behind the scenes and work through the State Department to bring Trevor home as soon as possible,’ he said.

The Reed family see things differently and as far as they are concerned, Cruz was not involved whatsoever in securing their son’s freedom, unlike the various other Texas politicians. 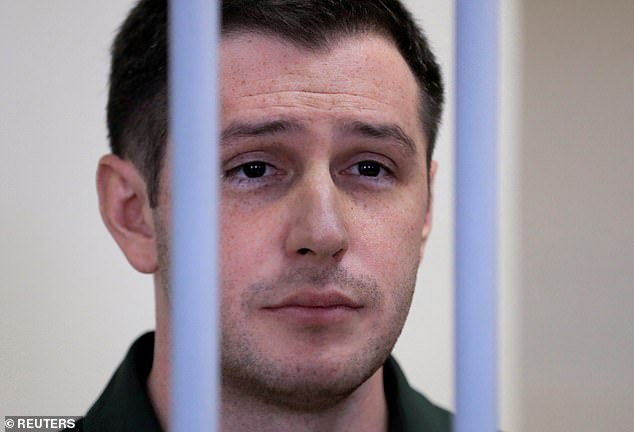 Ex-Marine Trevor Reed was detained in 2019 and accused of assaulting police officers. He is pictured inside a defendants’ cage during a court hearing in Moscow in March  2020 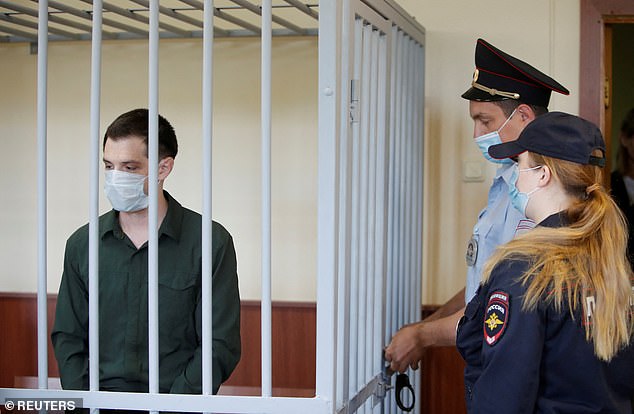 Reed inside a defendant’s cage in a courtroom during a Moscow hearing in July, 2020 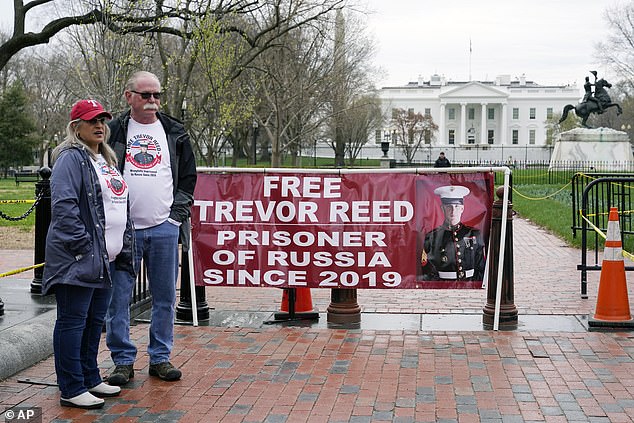 Reed’s parents, Joey and Paula Reed, demonstrated outside the White House in March. They were later be granted a meeting with President Biden to discuss the situation 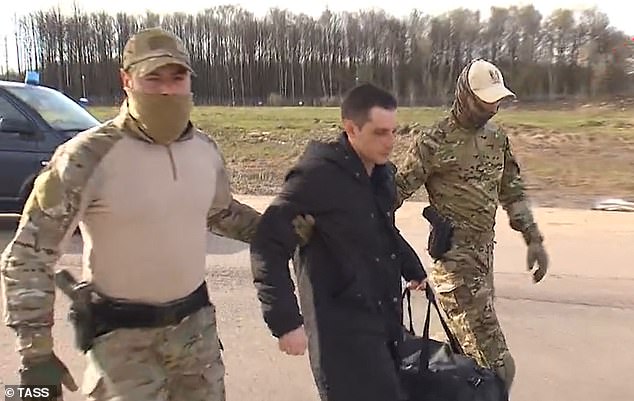 White House officials revealed that concerns of Trevor’s deteriorating health largely motivated a ramping up of efforts to see him released. He appeared gaunt during the prisoner exchange 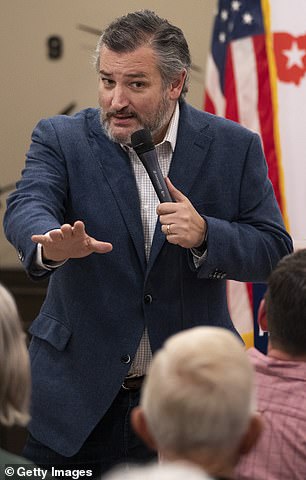 Reed recalled how shortly after his son’s arrest in Moscow in 2019, he got in touch with Cruz’s office.

His son, Trevor, had been arrested having been accused of assaulting a police officer. It was also further alleged that as he was being taken to the station and following a heavy drinking session, he grabbed one of the cops causing the police car to swerve.

It soon became apparent that he was going to face a nine-year jail term.

When the Reed’s called Cruz’s office, they were told there was little the senator could do with one member of staff saying that he would be unable to help, at least publicly.

‘Because Senator Cruz is such an enemy of Putin, he’s afraid that if he says anything, it will hurt your son,’ Reed claims the staffer said. 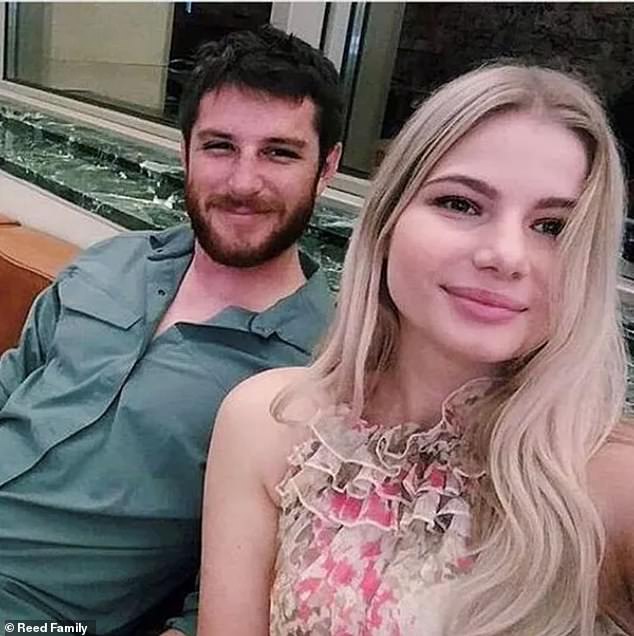 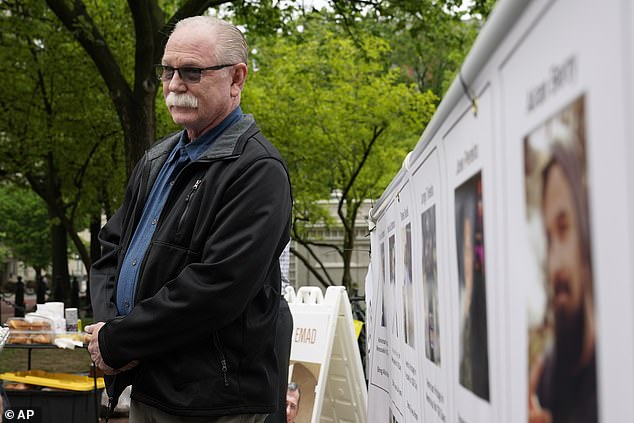 Once Trevor Reed was released, Cruz released a statement.

‘I’m relieved that Trevor Reed has been freed from his wrongful detention by Russia. This Marine will now be reunited with his family and get the medical treatment that he needs. It is imperative that Russia release the other Americans who they continue to wrongfully detain.’

He then called the Reeds at home to congratulate them following their son’s release.

‘And I told him right on the phone, I said, “Where have you been for the last two and a half years?”‘ Joey Reed said.

‘I hit him point blank: “We are not appreciative.” He said, “Well, anything I can do,” and I said, “We said we needed your help two and a half years ago, not now.”‘

Cruz claims that his team discussed Trevor Reed with both the Trump and Biden administrations as well as the U.S. ambassador to Russia, John Sullivan. 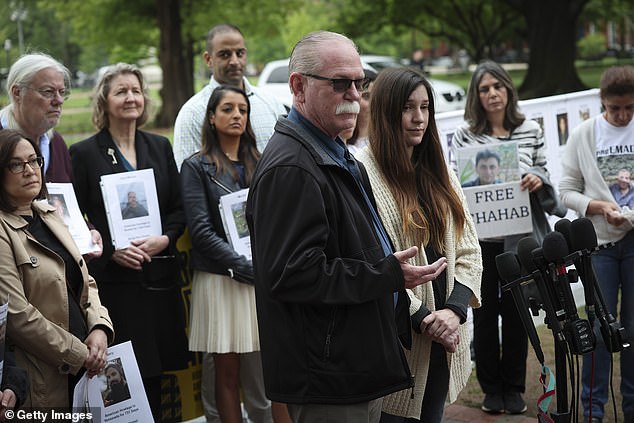 Father Joey Reed, left, stands together with his daughter Taylor Reed, right, the father and sister of Trevor Ree. The family members urged the Biden administration and the U.S. Congress to take decisive action to bring wrongfully detained Americans home 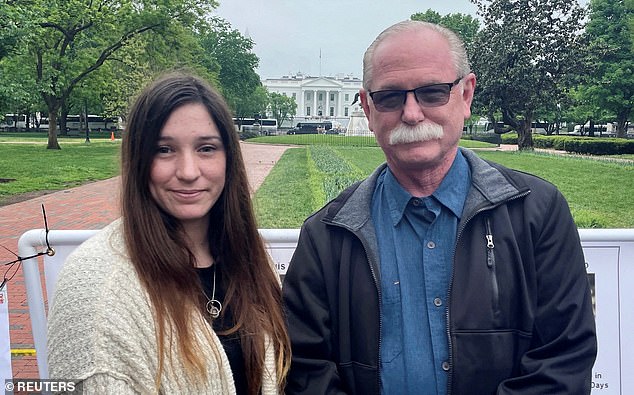 Taylor and Joey Reed pose for a photograph, while gathering with families of other detainees outside the White House in Washington last Wednesday

But Joey Reed claims to be unaware of any behind-the-scenes efforts by Cruz, nor of his staff informing him that they were doing so.

In contrast to Cruz, Reed says Rep. August Pfluger repeatedly called for Putin to end Reed’s imprisonment even sponsoring a resolution last year that called for Trevor’s release. It passed in the House with bipartisan support.

Texas Congressman Michael McCaul, who is the top Republican on the House Foreign Affairs Committee has been a ‘a giant, loud, outspoken critic of Putin and he’s been a giant, public voice for our son.’

‘We’ve been so thankful, and we believe that the public voice is what made the difference in our son’s case, not the traditional go behind the scenes and just check on people,’ Joey Reed said.

Man, 35, arrested by NYPD after wrestling a 52-year-old homeless man onto the subway tracks 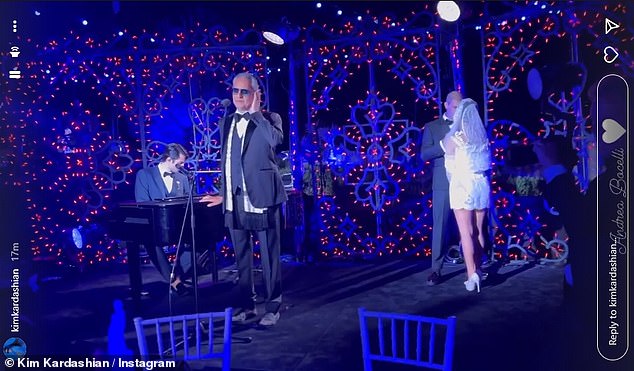 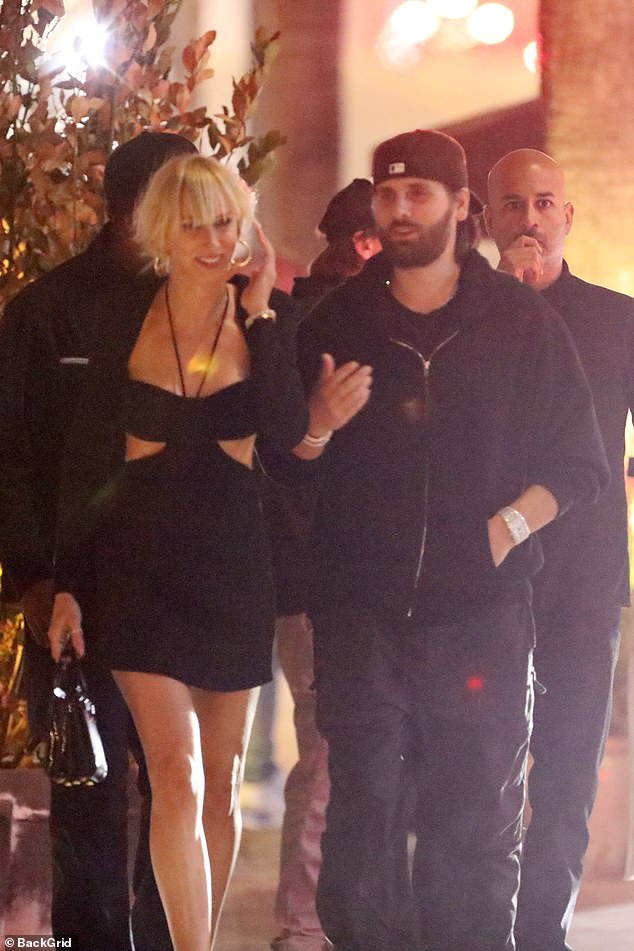