The German-born star, who has died aged 53 in a Manchester hospital after a battle with Covid-19, was set on a career in music early in life, recording his first album at the age of eight and performing on Spanish TV at 10.

Together the group found global fame, selling 30million records around the world, selling out stadiums – and becoming a favourite with mothers and grandmothers thanks to their classically handsome look.

But unlike many global music stars, Marin preferred to keep his private life private. He spent 13 years with French singer Geraldine Larrosa, proposing to her the day before a surprise wedding at Disneyland, California.

Although their marriage ended three years later, they have remained the closest of friends. Geraldine was with him in hospital during his final days and asked fans to come together and pray for her ‘best friend’ and the ‘world’s best singer’, as he battled for his life. 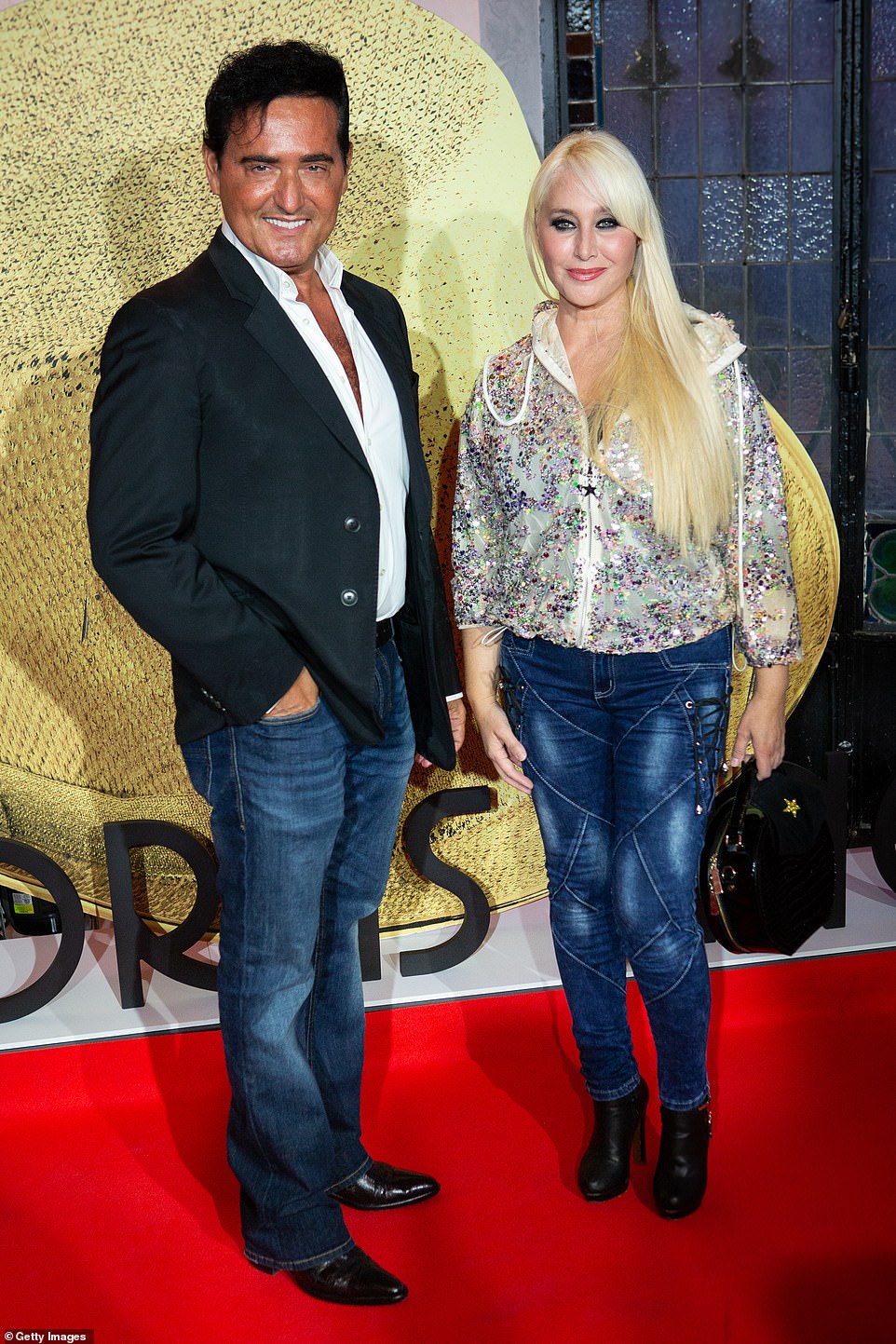 By his side: Carlos Marin with his ex-wife, French singer Geraldine Larrosa, in October 2021. The couple were together for 13 years before their 2009 divorce and remained close. Geraldine, known by her stage name Innocence, is thought to have been with Marin in hospital 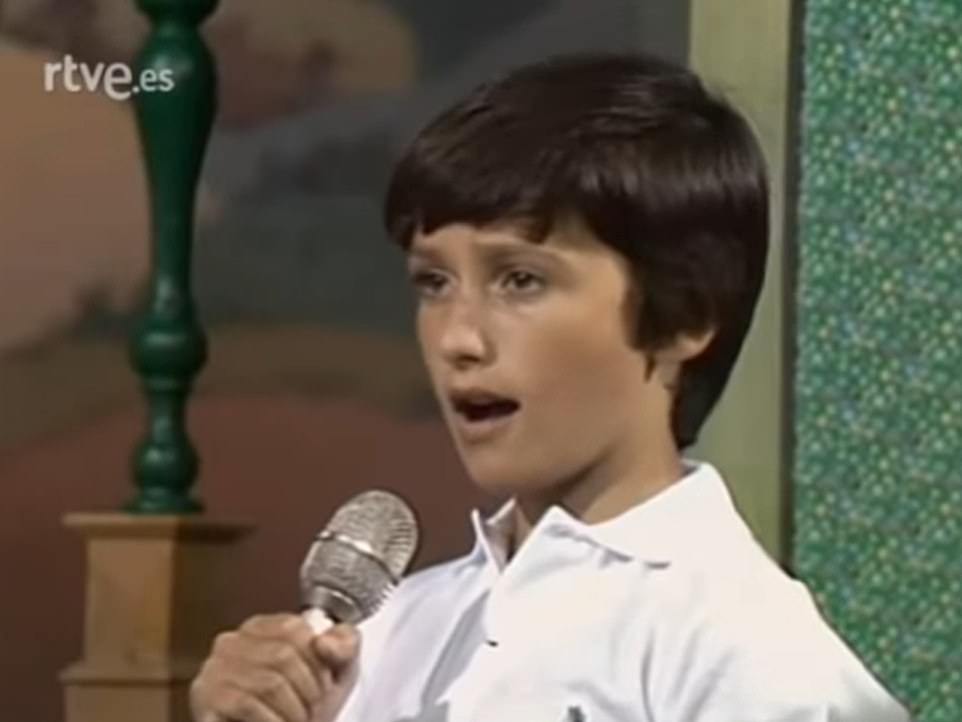 Child prodigy: Marin released his first album at the age of eight and appeared on TV for the first time (pictured) aged 10. He sung in both Spanish and Dutch as a child 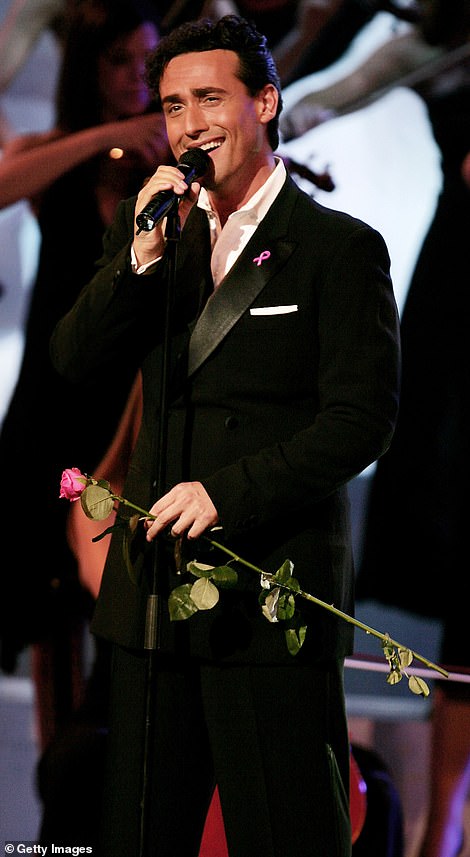 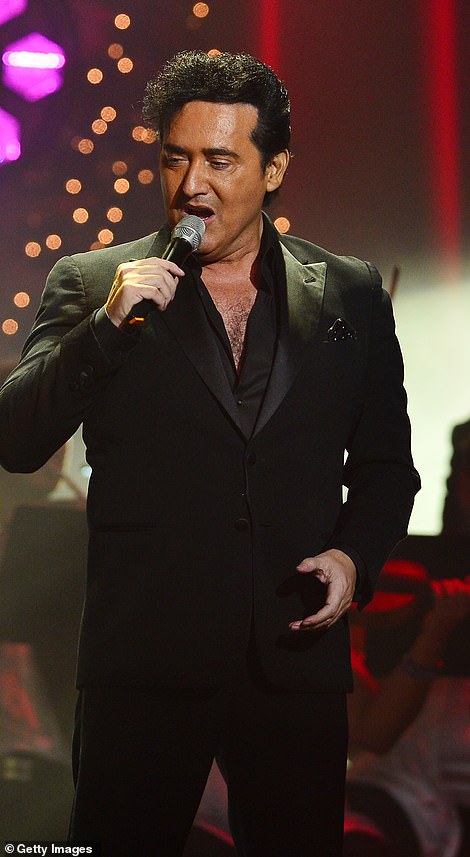 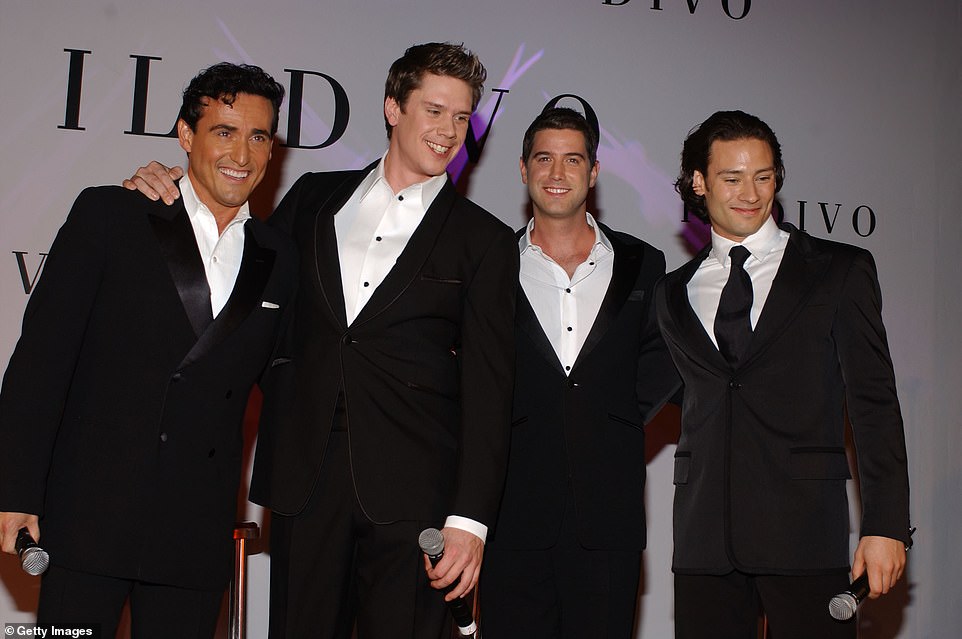 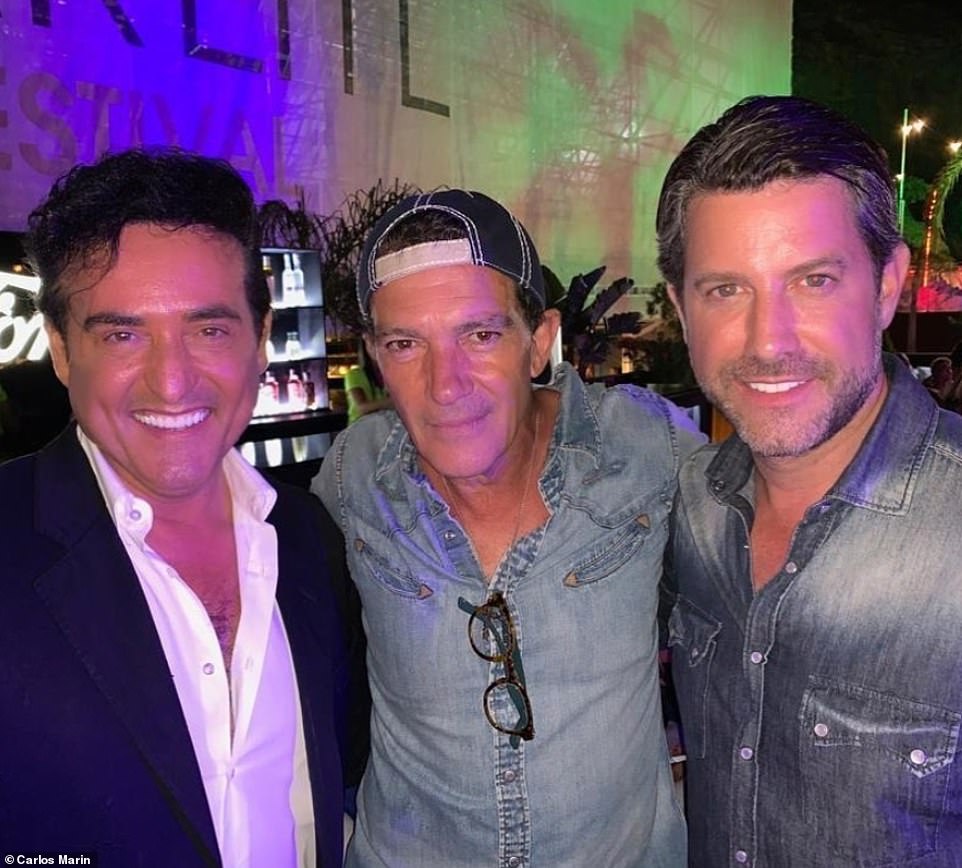 Born in 1968 near Rüsselsheim, Germany, little is known about Marin’s early life, except that he was raised in Madrid, Spain, where he found fame as a singer before he finished primary school.

Presumably with the support of his parents, Marin recorded his first album at the age of eight, lending his voice to Spanish and Italian standards like Grenada and ‘O sole mio’.

Already possessing a maturity and vocal control beyond his years, Marin was nicknamed The Little Caruso, after the acclaimed Italian tenor Enrico Caruso, who found fame at the turn of the 20th century.

His first TV appearance came at the age of 10 when he performed Grenada on Spanish children’s programme La locomotora, recorded in front of a live studio audience.

Demonstrating his work ethic and commitment to building a musical career, Marin released another album (Mijn Lieve Mama, or My Dear Mother, in Dutch), and appeared on a string of TV shows before reaching his 20s.

A clip from one appearance on Gente Joven, or Young People, shows a 17-year-old Marin winning over female viewers with his dark-haired good looks and Hollywood smile. 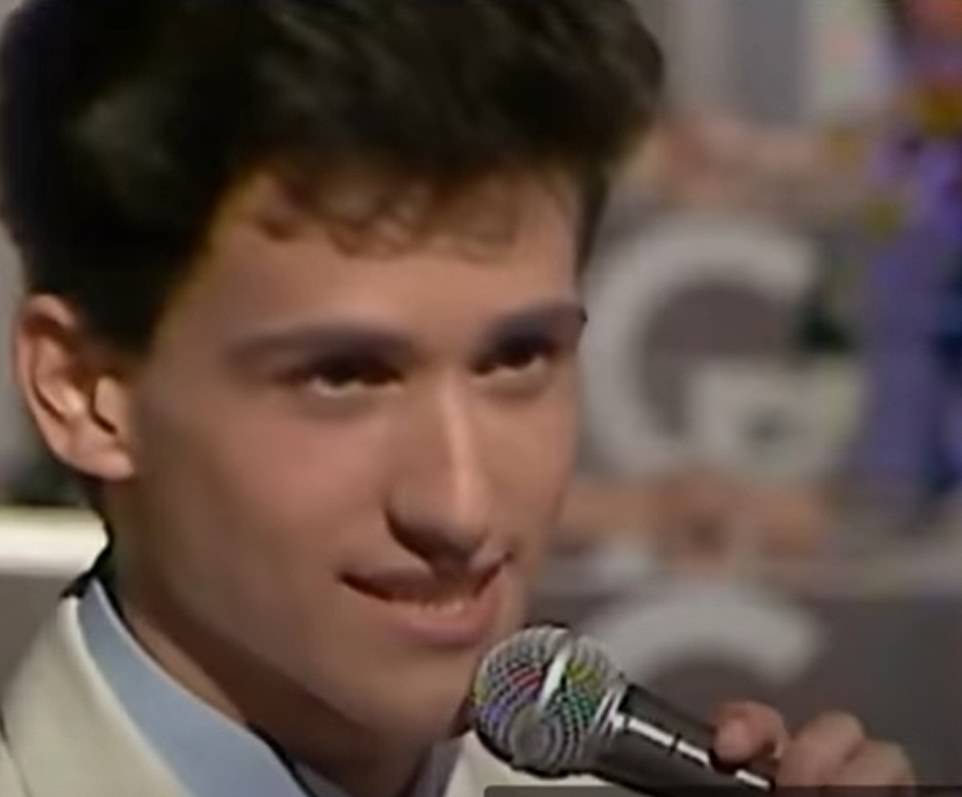 Starting out: A clip from one appearance on Gente Joven, or Young People, shows a 17-year-old Marin winning over female viewers with his dark-haired good looks and Hollywood smile 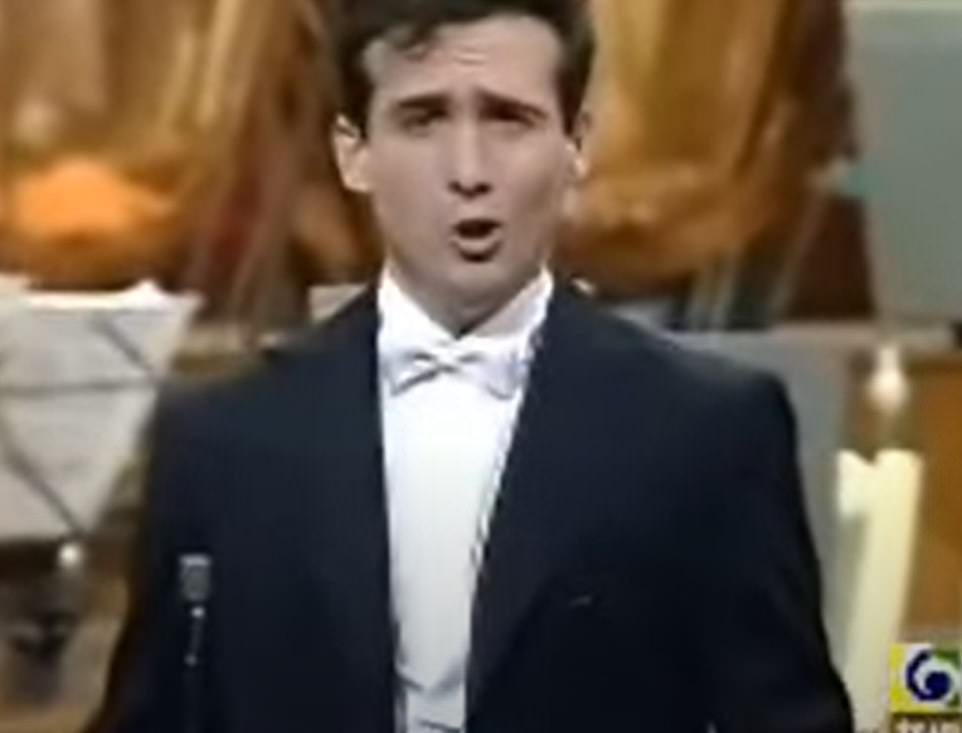 Powerful voice: Marin, whose vocals ranged from the low register of a baritone to the top register of a dramatic tenor, performing in Madrid in the late 1990s

Thanks to his prolific start in life, by the time he was in his mid-20s, Marin had established himself as a well-known face in the industry in Europe, appearing in Spanish language stage productions of Les Miserables, Grease and Beauty in the Beast.

Marin also found success in voicing animated films. He sung on the soundtrack to 1993 animated classic The Night Before Christmas and voiced the Prince in the Spanish version of Disney’s Cinderella, released in 2000. 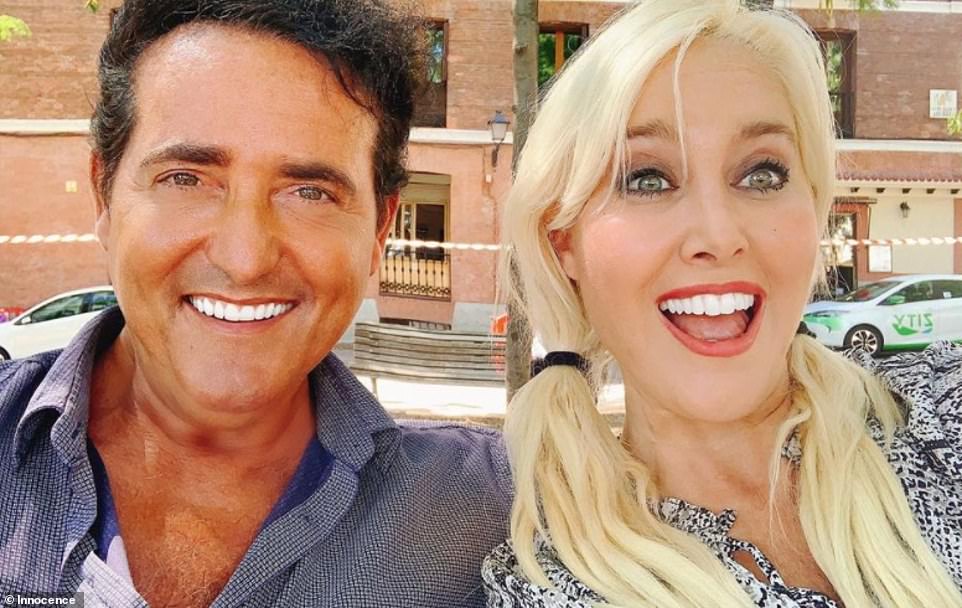 BFFs: In the early 1990s, Marin found love with French born singer Geraldine, known by her stage name, Innocence. The pair (pictured on Geraldine’s Instagram) remained friends after their 2009 divorce 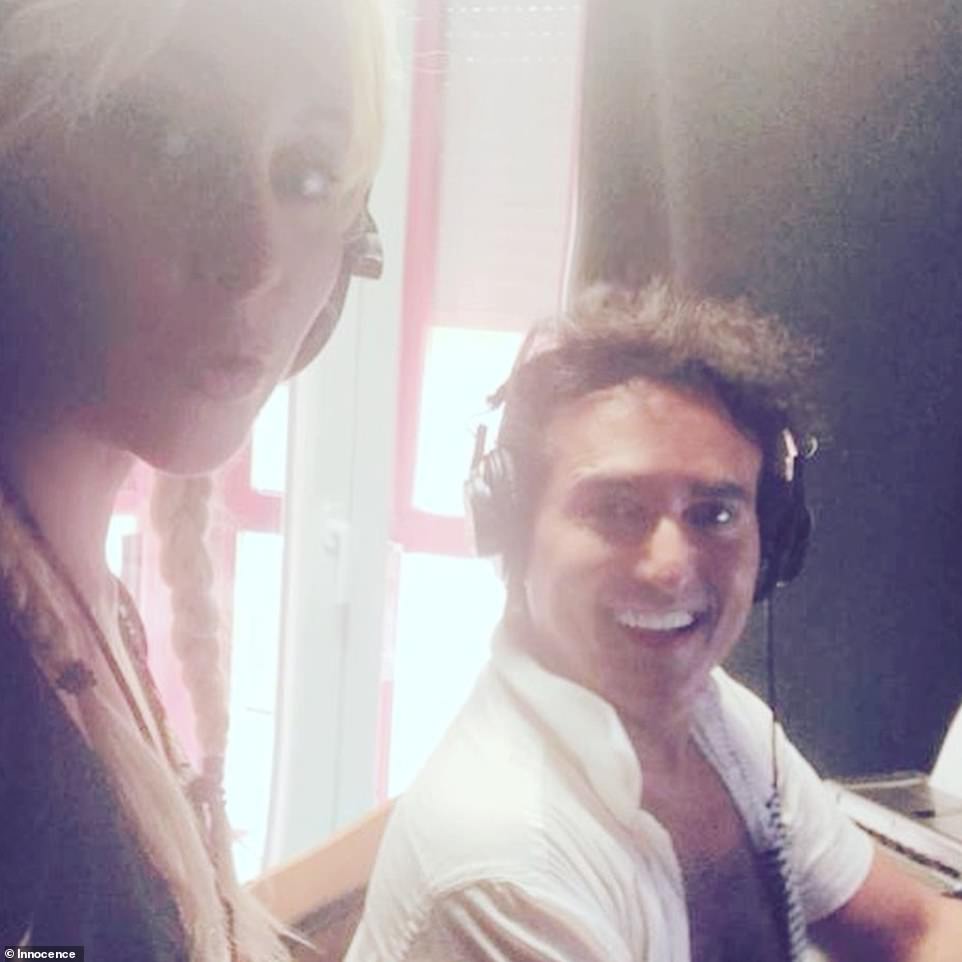 In the studio: Marin was due to perform with Geraldine on New Year’s Eve. Pictured, the pair in the studio in August 2020. Marin continued to produce Geraldine’s records after the split 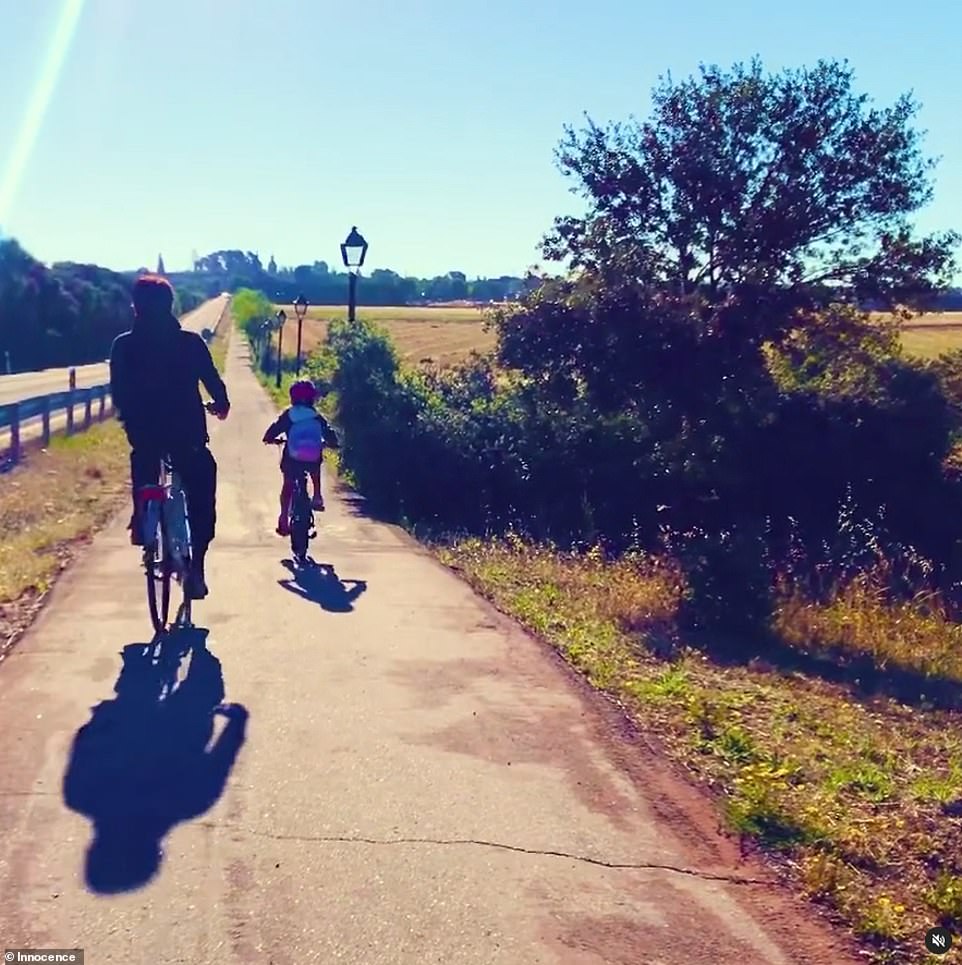 The couple wed in 2006 when Marin surprised his long-time girlfriend with a wedding at Disneyland, California.

Marin secretly organised the ceremony to coincide with a work trip to Los Angeles and San Diego and invited their friends and family without Geraldine’s knowledge.

A day before the wedding, Marin proposed. The following day, Marin told her to buy a wedding gown, telling her they were going to go to Disneyland to star in a fairytale-themed photoshoot.

Only when she arrived, she discovered they were to be married.

Photos from the big day show the couple beaming in front of Cinderella’s glass carriage, with Geraldine resplendent in an over-the-top gown and towering glittery crown. 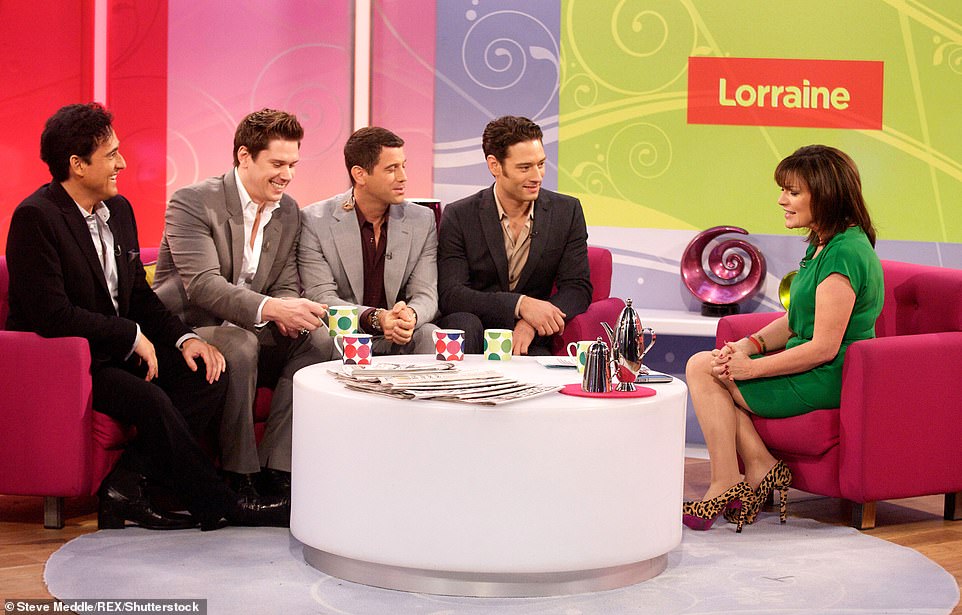 Global fame: Il Divo being interviewed by Lorraine in 2011, to promote their sixth album 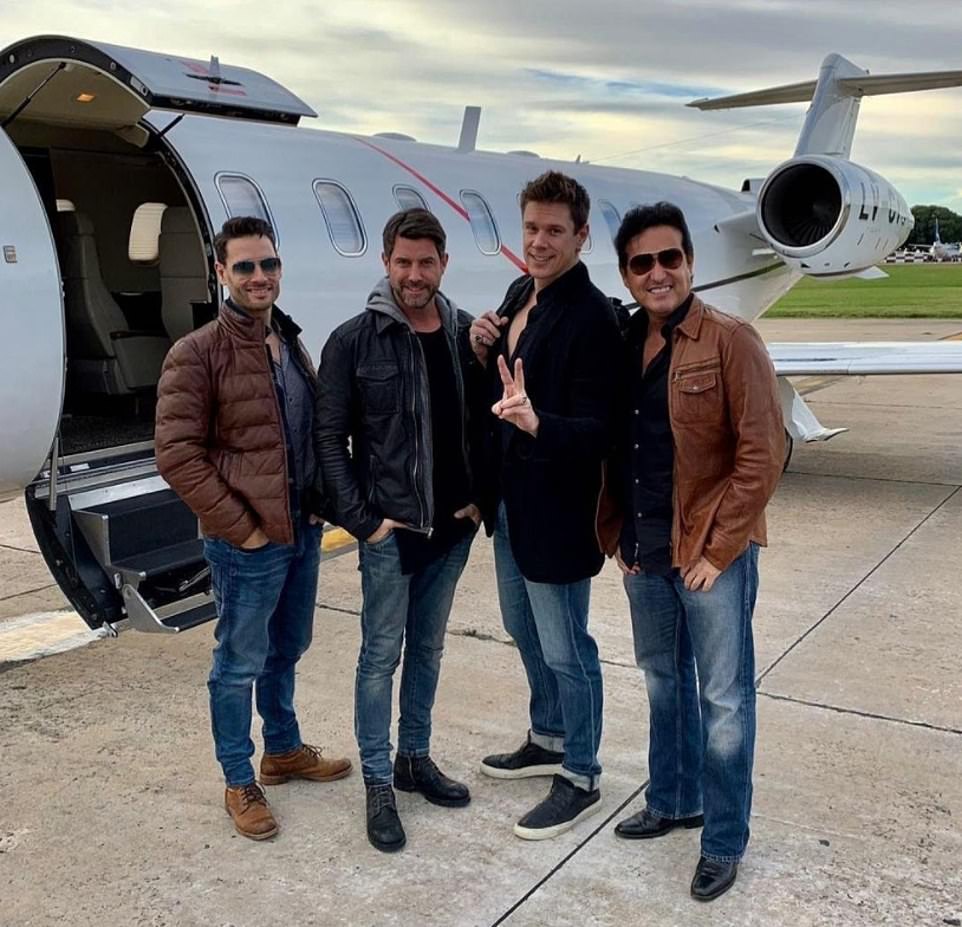 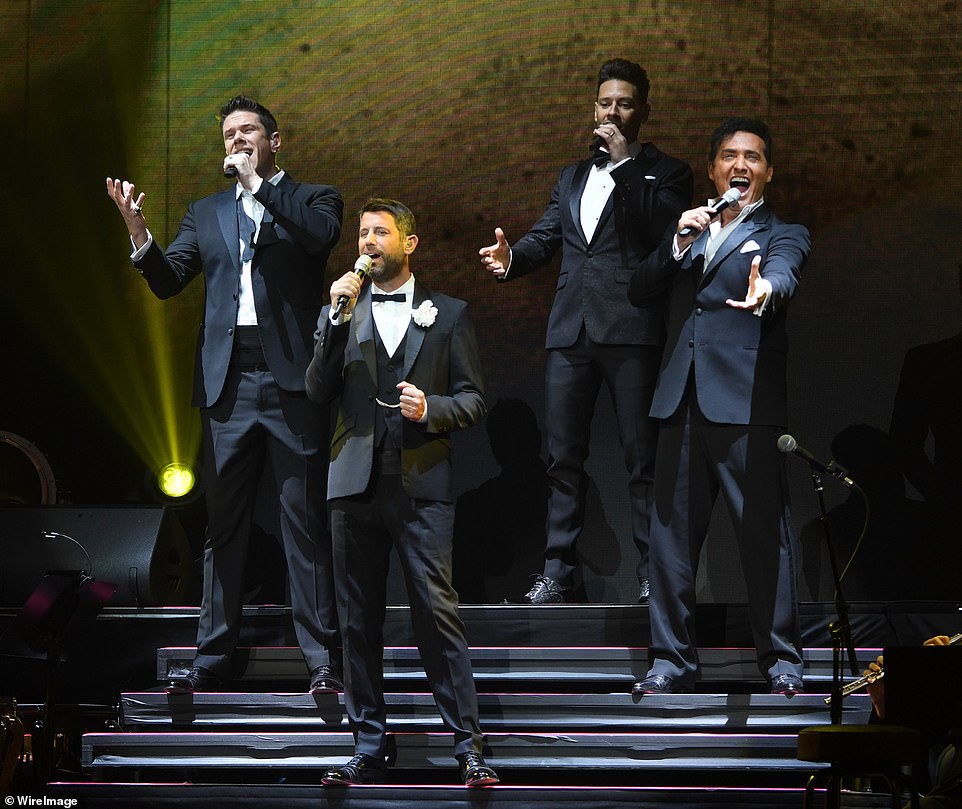 Superstars: The group are considered the pioneers of operatic pop, or popera, and their live concerts have sold more than two million tickets worldwide (Marin pictured right in 2019)

Although the marriage ended in divorce, the couple remained ‘best friends’ and continued to perform and produce music together. They were due to perform on Spanish TV on New Year’s Eve.

‘I always include her in my works because, apart from being my ex, she is a fabulous singer and we have a fantastic friendship relationship,’ Marin once told Hola Magazine.

He also considered her daughter Scarlett, born to the actor Sergio Arce Tula, his ‘niece’ and sweet videos show the pair enjoying birthday celebrations and bike rides through the countryside.

Last month a 72-year-old woman from Barcelona was convicted of coercion and fined €60 for sending Mr Marín explicit and threatening letters.

The woman – named only as Rosa – was also given a six-month restraining order preventing her from coming within 500metres of Mr Marín. 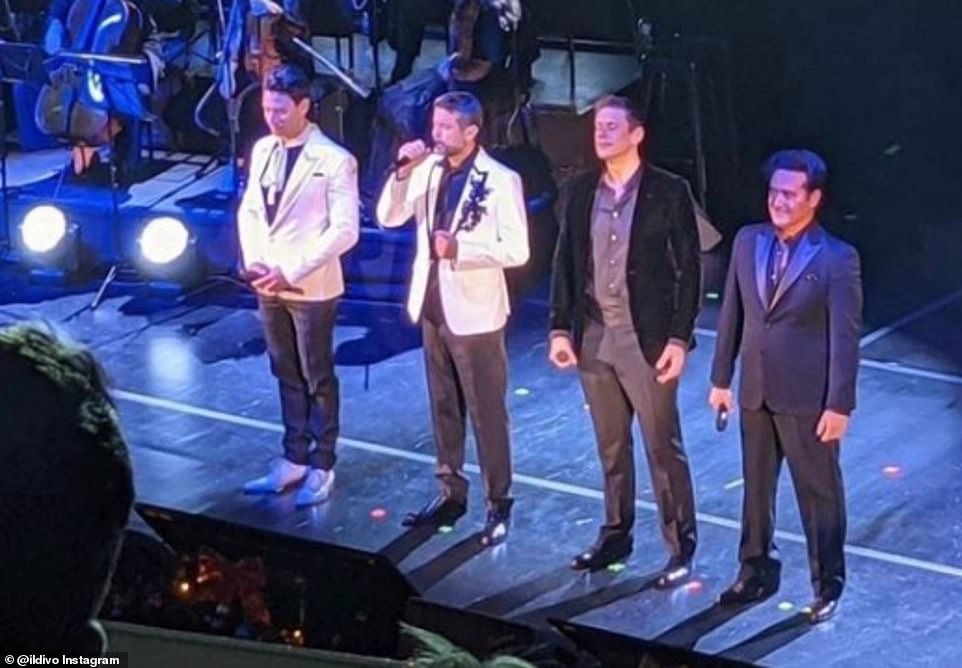 Final performance: Il Divo’s concert in Bath on December 6 was the last time Mr Marín (right) was seen on stage

His lawyer filed an appeal against the lightness of her sentence, noting he’d had to change his ‘work and life habits’, The Olive Press reported.

The female fan is said to have started to develop a ‘platonic love’ for the Il Divo star before beginning to make offensive phone calls to his production company and turn her venom on the 53-year-old.

She sent ‘threatening and offensive messages’ to the singer, his family and work colleagues in letters according to a written court judgement, making a series of detailed sexual proposals based around sadomasochistic practices.

At one point she was calling the singer’s aides up to a dozen times a day. The woman at the centre of the extraordinary case was said to have posed as a businesswoman trying to hire Carlos for a musical project and began to send the lurid letters after being turned down.

The singer’s lawyer claimed her harassment had led to the Il Divo star suffering sleepless nights and ’emotional stress’ and had even led to him fearing leaving his home.

Rosa’s defence team said before she was convicted she suffered a mental illness but the judge rejected their claim.

At around the same time of his marriage, Marin was scouted by Simon Cowell for Il Divo, the classical crossover vocal group he was inspired to form after listening to the Three Tenors.

Wanting to recreate the success of Luciano Pavarotti, José Carreras and Placido Domingo, Cowell conducted a two-year global search, which ended in 2003 with the signing of the American tenor David Miller.

The group, which eventually parted ways with Cowell’s SyCo record label, had been on a UK tour when Marin was admitted to hospital.

Earlier this month, he shared a selfie video from beside a pool in Maspalomas, Gran Canaria, to promote the final leg of the tour.

He then performed in Southend, Bournemouth and Brighton – when he posted an aInstagram video which showed him looking healthy while talking enthusiastically about the upcoming performance.

Il Divo’s concert in Bath on December 6 was the last time he was seen on stage and he was admitted to hospital two days later, El Espanol reported.

Statement: Singer Michael Ball wrote in tribute: ‘Unbelievably sad to hear of the the passing of the lovely @carlosmarin’ 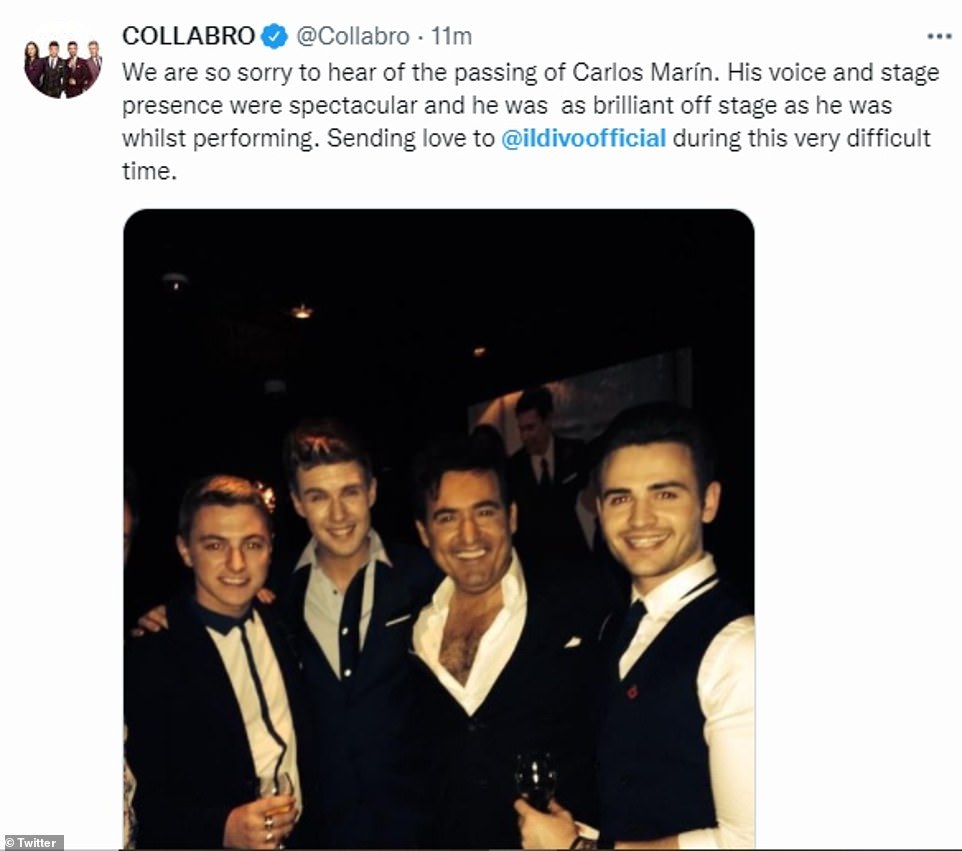 RIP: Elsewhere, series eight winners of Britain’s Got Talent, musical theatre based group Collabro, shared a photo with the late star and praised his ‘spectacular’ voice and stage presence

Gigs in Hull and Nottingham were called off and on December 10, Il Divo announced all subsequent shows had been postponed until 2022.

Carlos had fallen ill on December 7, tested positive for Covid shortly afterwards, and was taken to Manchester Royal Infirmary last week, his agent told media in his home country of Spain.

He was subsequently put into a medically induced coma and hooked up to breathing machines, though it is unclear exactly when that happened.

‘Yesterday the singer wasn’t answering his messages and he’s now in intensive care and intubated.

‘[His] agent has also told us Carlos was vaccinated against Covid in Mexico,’ Spanish news programme Corazon Corazon reported, without saying how long ago Carlos was jabbed, how many shots he was given, or what vaccine he received.

Mexico has given a mixture of vaccines, the majority of which are AstraZeneca/Pfizer though significant numbers of Chinese and Russian shots have also been used. 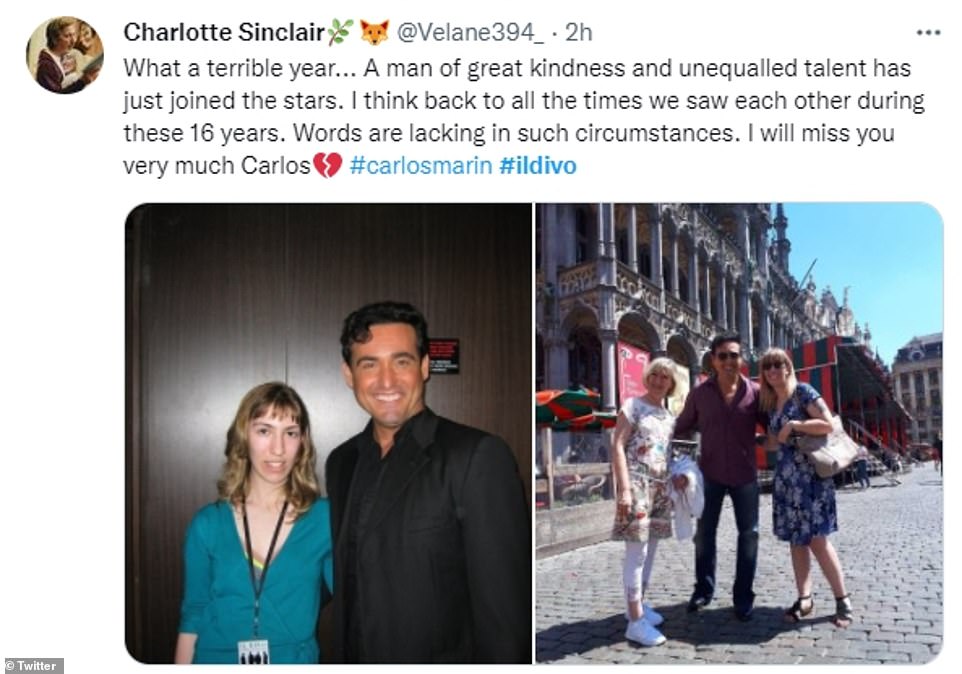 Looking back: One super fan paid tribute to his ‘great kindness’ and ‘unequalled talent’ as she reminisced on the better times

Marin’s death was announced by his bandmates on Twitter yesterday.

Sharing the news, Il Divo wrote: ‘It is with heavy hearts that we are letting you know that our friend and partner, Carlos Marin, has passed away.

‘He will be missed by his friends, family and fans. There will never be another voice or spirit like Carlos.

‘For 17 years the four of us have been on this incredible journey of Il Divo together, and we will miss our dear friend. ‘We hope and pray that his beautiful soul will rest in peace. With Love – David, Sebastien and Urs.’

Cowell led a flood of social media tributes to Marin, writing on Twitter he was ‘devastated’ by the news.

‘I am finding this so difficult to put into words how I feel right now,’ Cowell said. 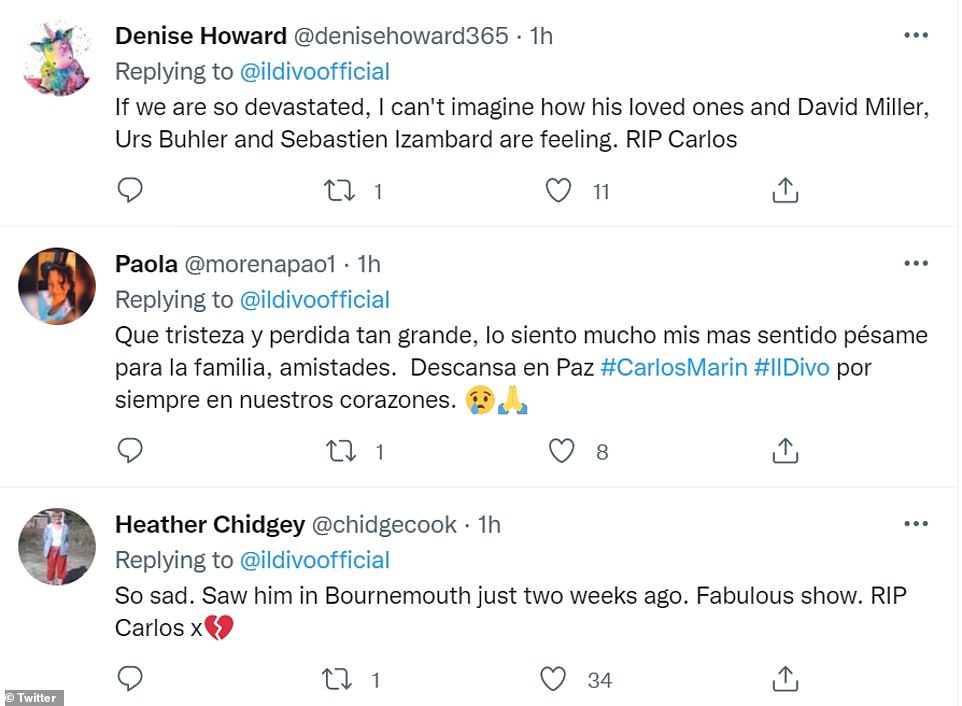 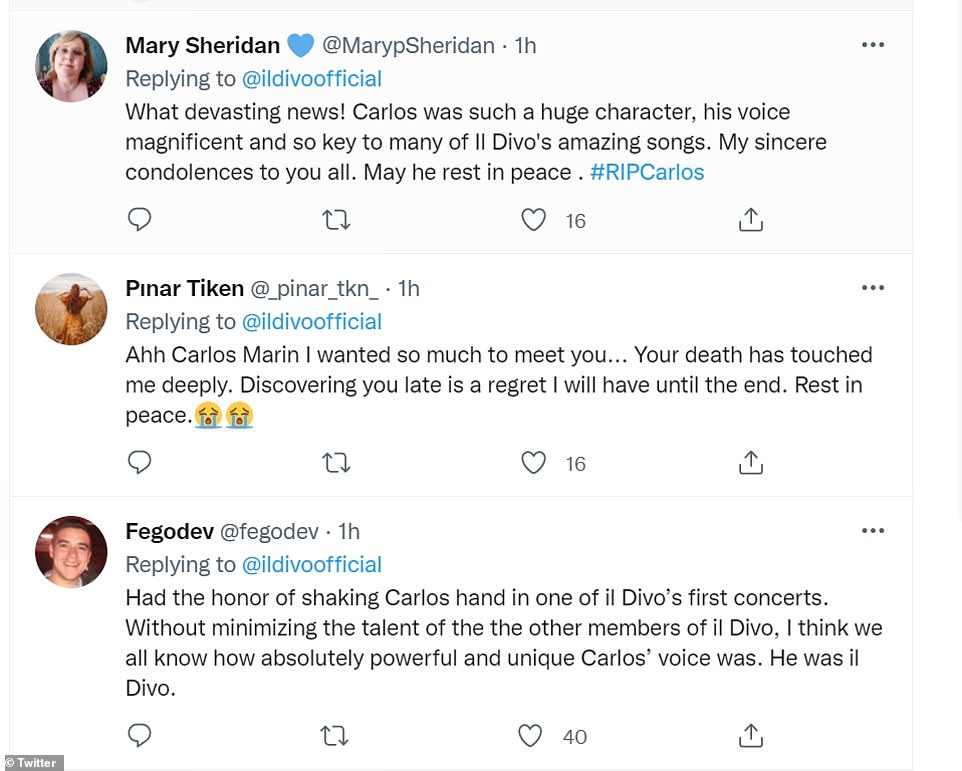 In our thoughts: Fans took to social media in their droves as news of his death broke on Sunday

‘I am devastated Carlos Marin has passed away. He loved life. He loved performing and always had so much appreciation towards the fans who supported the group from day 1. Rest in peace Carlos. I will miss you.’

Television presenter Lorraine Kelly tweeted: ‘This is so sad. I had the joy of interviewing Carlos and Il Divo many times over the years.

‘He was such a class act. Thoughts with everyone who loved him’.

‘We had the best time putting together the first @ildivoofficial performance 17 yeas ago great voice great man a true passionate Spirit with wicked sense of humor we will miss you so sad.’

Australian singer-songwriter and former frontman of pop duo Savage Garden, Darren Hayes, said on Twitter: ‘To the family, friends and fans of Carlos Marin I send my deepest condolences … I’m so sorry for your loss.’

Laura Koensberg will step down as BBC political editor on Easter