By Claire Toureille For Mailonline

This is the heartwarming moment a 93-year-old man receiving end of life care was surprised with an impromptu jazz concert in his front garden.

Dick Hockridge’s family had posted a social media appeal asking for help to stage a performance for the pensioner, a big fan of big band and jazz music living in Tyne and Wear in Sunderland.

The request was seen by BBC Radio Newcastle presenter Kelly Scott and responses came flooding in from performers all over the county.

Just two days later the radio station helped organise the concert, with pianist Mark Deeks and singer Jennifer Hastings singing to Dick and his wife of 60 years, Agnes, with a garden performance they could enjoy from the comfort of their front room.

They played songs the couple have danced together to over the years, including their all-time favourite Moon River. 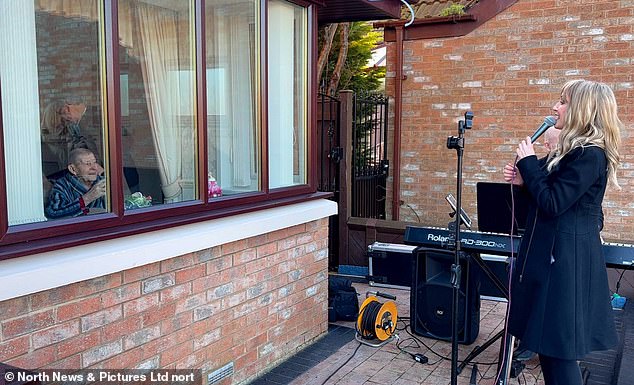 Pianist Mark Deeks and singer Jennifer Hastings, right, sang for 93-year-old jazz lover Dick Hockridge from his garden in in Tyne and Wear in Sunderland. after his family appealed for musicians online 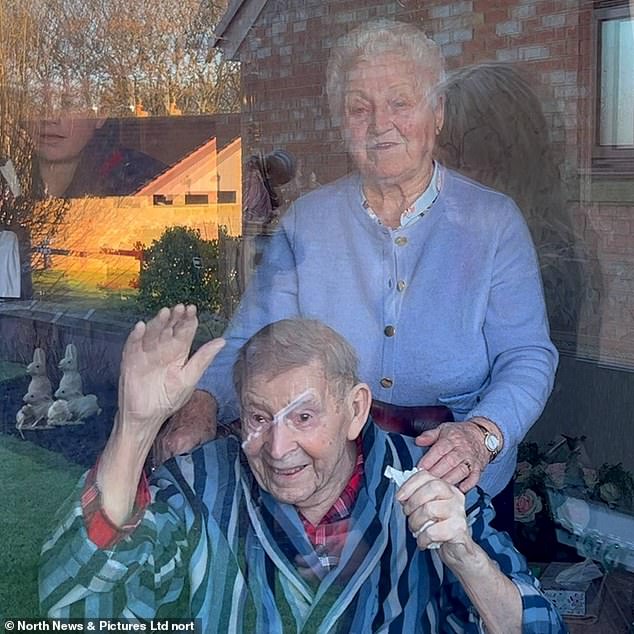 Dick, pictured with his wife of 60 years Agnes, is receiving end of life care at home and his family wanted to treat him to something special

Dick, a former shipyard worker, could be seen sat up at the window, singing along while emotional family members and neighbours looked on.

Singer, Jennifer Hastings said: ‘It was such a rainbow of emotions. It was like Dick couldn’t believe it.

‘This is the kind of thing that means more than anything else. I’ve got a million Christmas parties and weddings, but to do something like this with such meaning for the family, and to sing for them.

‘I’m getting emotional just thinking about it. I’ve done some emotional gigs before but this will stay in my memory for the rest of my life.’ 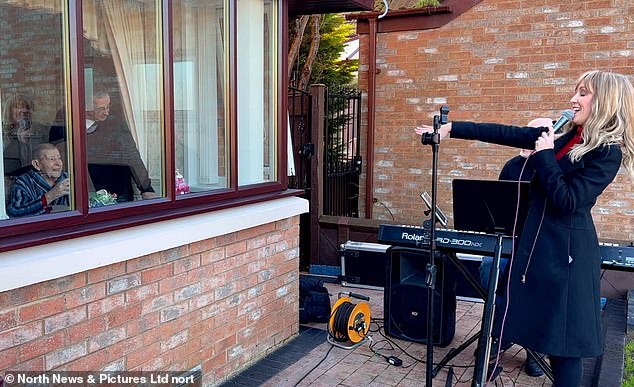 At the end of the concert, Dick himself mustered the strength to say a few words. He said: ‘Merry Christmas and a Happy New Year to everyone in the whole wide world. Peace be with you. Thank you.’

Last week, Helen Wilson, who is married to Dick’s grandson tweeted: ‘I’ve a close relative who is at end of life care, & a huge fan of jazz/big band music. I’d love to arrange a home piano recital-type thing, but sadly my playing isn’t currently at a standard to do it justice. Can anyone recommend any NE pianists who would provide this service?’.

Speaking afterwards she said: ‘I never expected it to blow up like this.

‘BBC Radio Newcastle really have given them so many beautiful moments to treasure that’ll last in their memory for however long he has left. You’re all superstars!’ 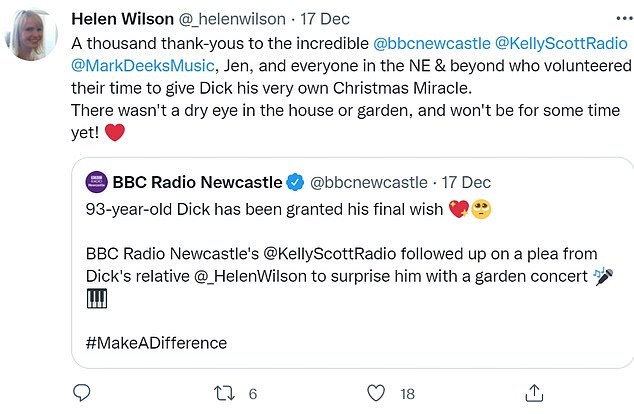 Helen Wilson, who is married to Dick’s grandson and posted the original plea. She thanked Kelly profusely on social media after the concert took place

Radio Newcastle presenter, Kelly, said she was overwhelmed with messages from musicians offering to play for the family.

‘I can’t believe the response to this,’ she said.

‘We could have filled the garden with performers ten times over with all the offers. Everyone has shown the family so much love.

‘We’re all about Making a Difference at BBC Radio Newcastle, and to be able to do this for Dick and his family, and to give them such a beautiful moment feels really special.’ 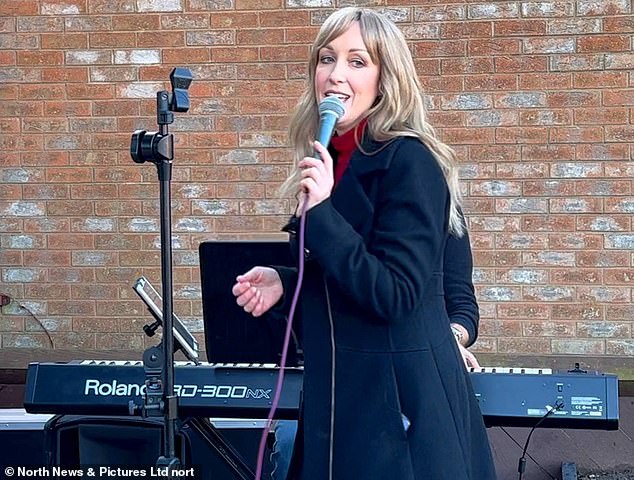 Jennifer, pictured, who sang for Dick, said the concert would stay in her memory for the rest of her life 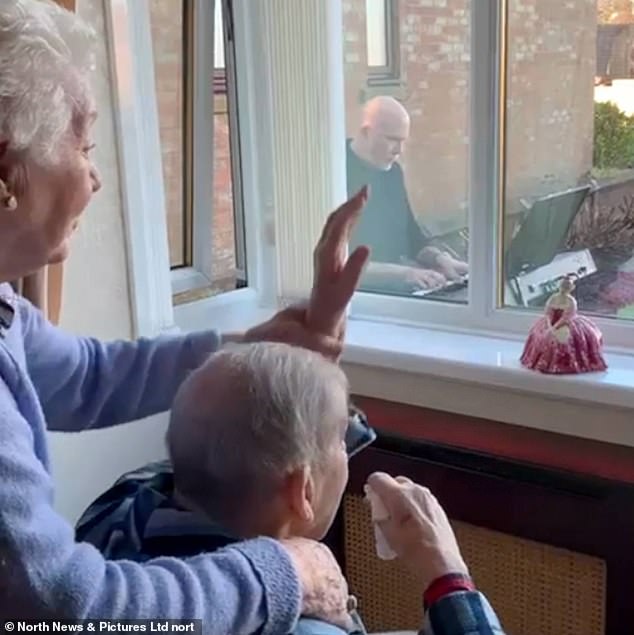 Agnes and Dick got emotional, pictured, as they watched the musicians play for them from the comfort of their home

PIERS MORGAN: The Mail on Sunday's diarist recalls the day Sharon Stone said he was terrible in bed