Some analysts are speculating that Elon Musk’s $44 billion bid to buy Twitter was ‘a ruse’ and an excuse to sell off some of his stake in Tesla.

Musk sent heads spinning on Friday morning when he tweeted that his bid was ‘on hold’ as he sought more information about fake accounts on Twitter. Hours later he tweeted that he was ‘still committed’ to the deal.

Analysts called Musk’s announcement ‘laughable’ and ‘farcical’, speculating that Musk planned to negotiate a lower price for the deal, or walk away and pay a $1 billion termination fee after market winds shifted against him in recent weeks.

Speaking before Musk’s Friday tweets, CNBC contributor Dan Nathan speculated that the entire Twitter takeover was an elaborate scheme to allow him to liquidate his stake in Tesla. 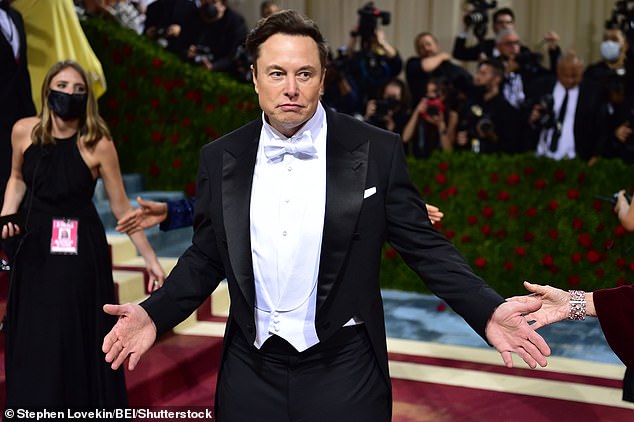 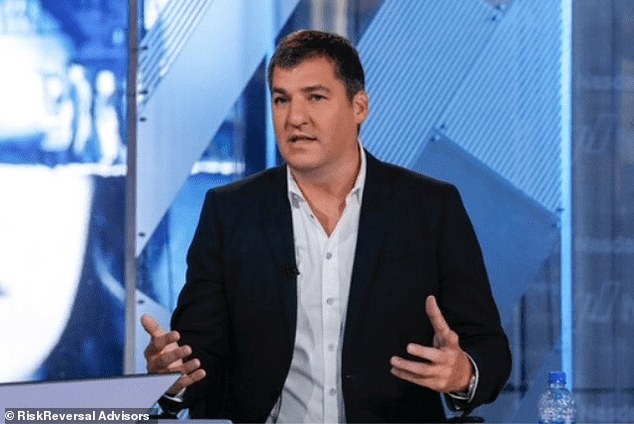 Speaking before Musk’s Friday tweets, CNBC contributor Dan Nathan speculated that the entire Twitter takeover was an elaborate scheme to allow him to liquidate his stake in Tesla

‘My big issue with this is I think it’s all a big fugazi. I think that he’s used it as a big ruse, as an excuse to sell a lot of Tesla stock, which he has done,’ Nathan told the Daily Beast’s New Abnormal podcast.

‘The stock was trading at $1150 a little more than a month ago. Right now, it’s about $745. That’s hundreds of billions of dollars in market cap that’s gone. If it goes much lower, he will not be able to buy Twitter. And I think he used Twitter as a big excuse to sell Tesla stock,’ he added.

Nathan did not explain why Musk would need an ‘excuse’ to sell his shares of Tesla. Musk has previously said that he wanted to avoid reducing his stake in the Tesla if possible.

After selling off blocks of shares last fall and in late April, Musk still owns about 16 percent of Tesla, a stake worth about $119 billion at current prices.

Musk has already sold off more than $8 billion worth of his Tesla shares to finance the Twitter purchase. 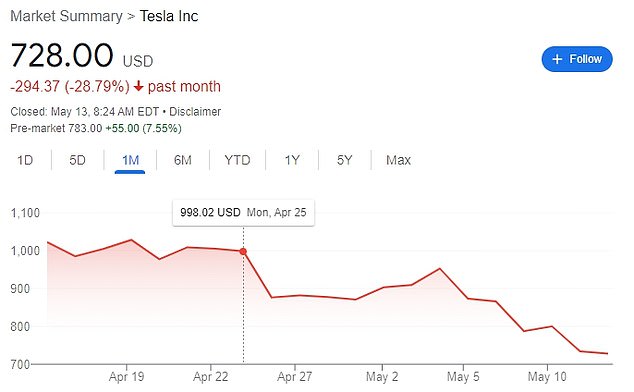 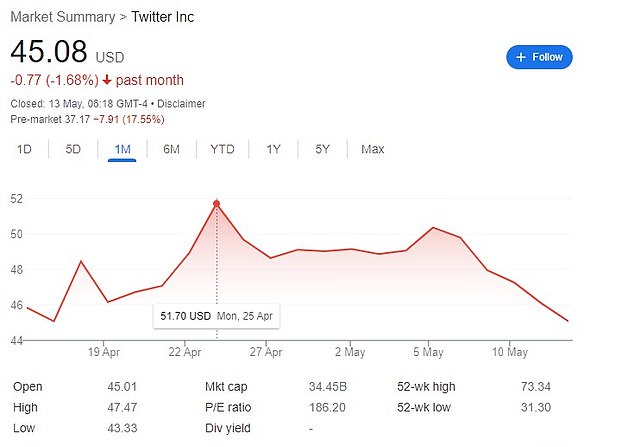 Originally Musk had committed to borrowing $12.5 billion with Tesla stock as collateral to buy Twitter. He also would borrow $13 billion from banks and put up $21 billion in Tesla equity.

Last week, Musk strengthened the equity stake in his offer for Twitter with commitments of more than $7 billion from a diverse group of investors including Silicon Valley heavy hitters like Oracle co-founder Larry Ellison.

Money from the new investors cuts the amount borrowed against the value of Tesla stock to $6.25 billion, according to the filing. The Tesla equity share could go from $21 billion to $27.25 billion.

Following Musk’s shocking tweets on Friday, many speculated that he is trying to secure a lower price for Twitter, as broader markets plunged in recent weeks, making the $44 billion offer price look ever more rich.

In a tweet, the Tesla billionaire linked to a Reuters story from May 2 about a quarterly report from Twitter that estimated false or spam accounts made up fewer than 5 percent of the company’s ‘monetizable daily active users’ in the first quarter.

‘Twitter deal temporarily on hold pending details supporting calculation that spam/fake accounts do indeed represent less than 5% of users,’ Musk said, indicating he’s skeptical that the number of inauthentic accounts is that low.

It wasn’t clear whether the issue could scuttle the deal. Musk later tweeted that he’s ‘still committed to acquisition.’ 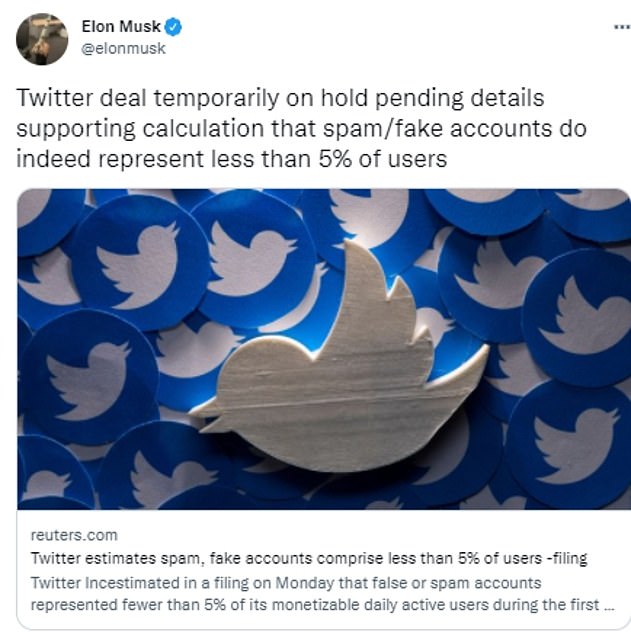 Hours later, Musk insisted that he was still committed to carrying out the deal

Wedbush analyst Dan Ives called Musk’s tweet ‘bizarre’ and said that it ‘now sends this whole deal into a circus show with many questions and no concrete answers.’

‘Many will view this as Musk using this Twitter filing/spam accounts as a way to get out of this deal in a vastly changing market,’ Ives wrote in a note.

‘If Musk does decide to still go down the deal path a clear renegotiation is likely on the table,’ he added.

Analysts questioned why Musk would suddenly express concern about Twitter’s estimate that 5 percent of accounts are fake, an estimate that the company has included in regulatory filings for years.

Susannah Streeter, an analyst at Hargreaves Lansdown, said: ‘This 5% metric has been out for some time. He clearly would have already seen it… So it may well be more part of the strategy to lower the price. 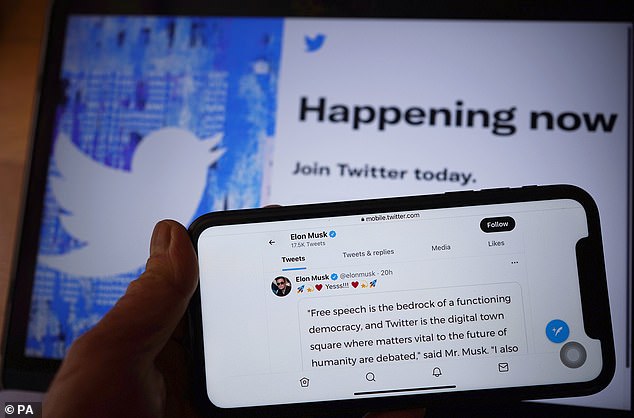 ‘It’s going to be highly frustrating for many in the company given that a number of senior executives have already been laid off,’ she said.

Neil Campling, head of TMT Research in London, said: ‘Laughable. We’d always said he may cut or run or change his tune at the 11th hour and 59 minutes and 59 seconds on the clock. It is farcical.

‘He has never had the full funding – we know that from his constant attempts to get financial support – but he also held all the cards.

‘And the Twitter board have been held hostage and only have themselves to blame for this mess. No other buyer will emerge – if he decides he is still interested he can name his price – and it won’t be higher!

‘They (the board) should have seen this coming. There was a specific performance clause in the merger agreement (section 9.9), which gave Twitter the right to ‘consummate the closing (of the deal)’ but only if he had the financing… which he doesn’t.’

Michael Hewson, chief markets analyst at CMC Markets, added: ‘Obviously, the markets are reacting as if he is going to pull out of the deal, otherwise why are Twitter shares down 20 per cent. So maybe he’s (Elon Musk) paving the ground for pulling out of the deal.

‘But the timing is curious given the lengths he’d gone to to secure financing for the deal. So, maybe some share holders in SpaceX and Tesla said they want his attention on his primary concerns there. This is straight out of the Musk play book, keeping shareholders on their toes.’

Short-selling firm Hindenberg Research said there is a ‘significant chance’ the entrepreneur will try to pay less than the agreed $54.20 per share price which was accepted by the Twitter board.

The sharp drop in the Nasdaq stock market since the deal was struck implies a far lower value for Twitter, whose value is being propped up by the takeover bid.

In a document published Monday, the company said: ‘We are supportive of Musk’s efforts to take Twitter private and see a significant chance the deal will close at a lower price.’

They added that if Musk decides to walk away, Twitter shares could fall by as much as 50 per cent. 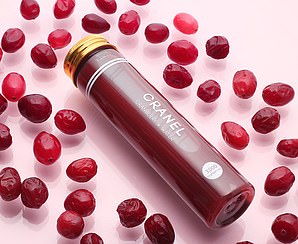 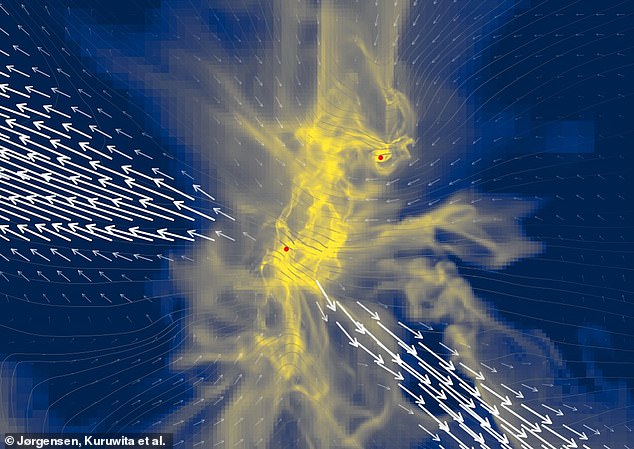 Featured Posts
Monkeypox outbreak may have been sparked by sex at two raves in Belgium and Spain, WHO expert warns
4 mins ago