Britain looks set to become the Covid pariah state of Europe once again as more countries are expected to follow France and Germany’s lead by imposing Omicron travel bans this week – just as they did last year over Alpha.

Italy, Portugal, Ireland and Greece last week tightened restrictions on vaccinated EU travellers to slow the spread of the virus, raising fears they may now seek to crack down further on those arriving from outside the bloc.

While there are currently no EU-wide plans to ban travel – Ursula von der Leyen has suggested mandatory PCR tests for those entering the bloc instead – Belgium, Estonia, Finland and the Netherlands are understood to be lobbying in Brussels for a ‘timely’ revision of border rules in light of the rapid spread of Omicron.

It comes after Germany on Saturday declared Britain a ‘virus variant area’, largely banning travel from the UK except by its own citizens – who will still have to quarantine on arrival for 14 days regardless of vaccine status.

France last week imposed similar measures, despite guidance from the EU’s own disease response agency issued a day earlier saying that travel bans will be largely ineffective in countries where Omicron is already spreading – including France and Germany. The UK has dropped all travel restrictions off the back of similar guidance.

The moves echo last winter when most countries – led by France – shut down cross-border travel with the UK over Christmas after the emergence of the Alpha variant, then known as the ‘Kent strain’.

Despite the measures, which first came into force in late December, Alpha had become the dominant strain in Europe by the end of winter before being over-taken by Delta in the spring. 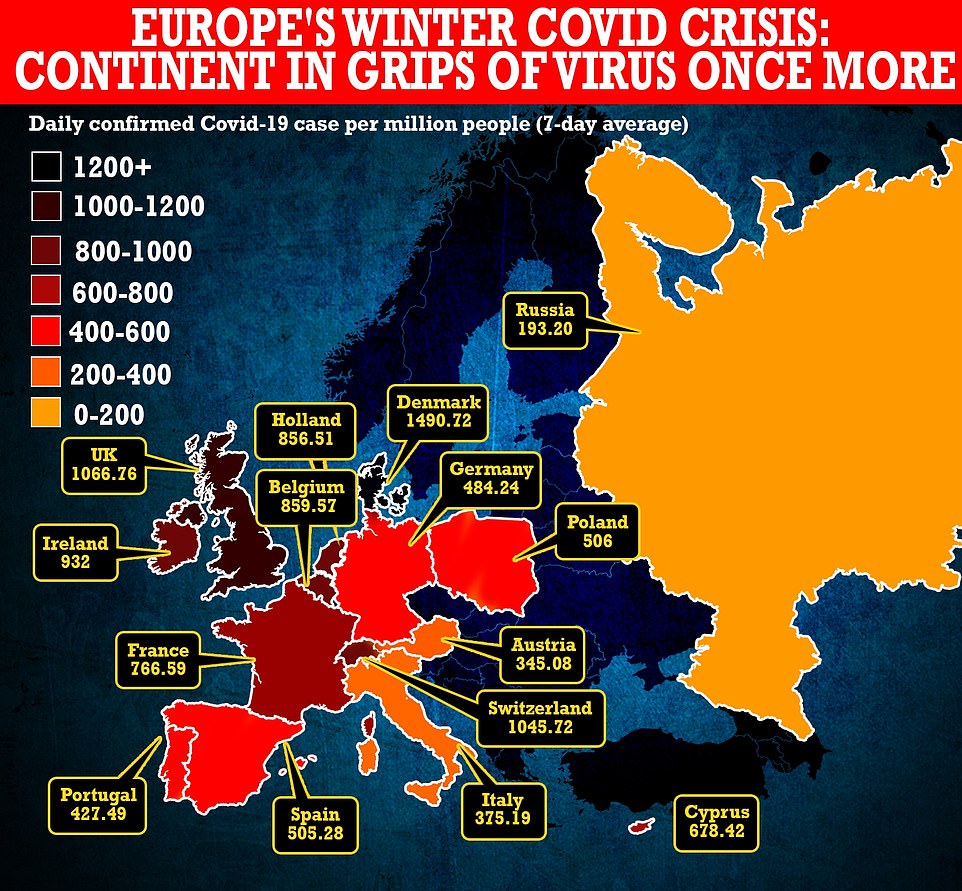 Europe is seeing a rapid rise in Covid cases across the continent, spurred by a winter wave of the Delta variant and the arrival of the new and more-infectious Omicron variant that has prompted many countries to reimpose restrictions 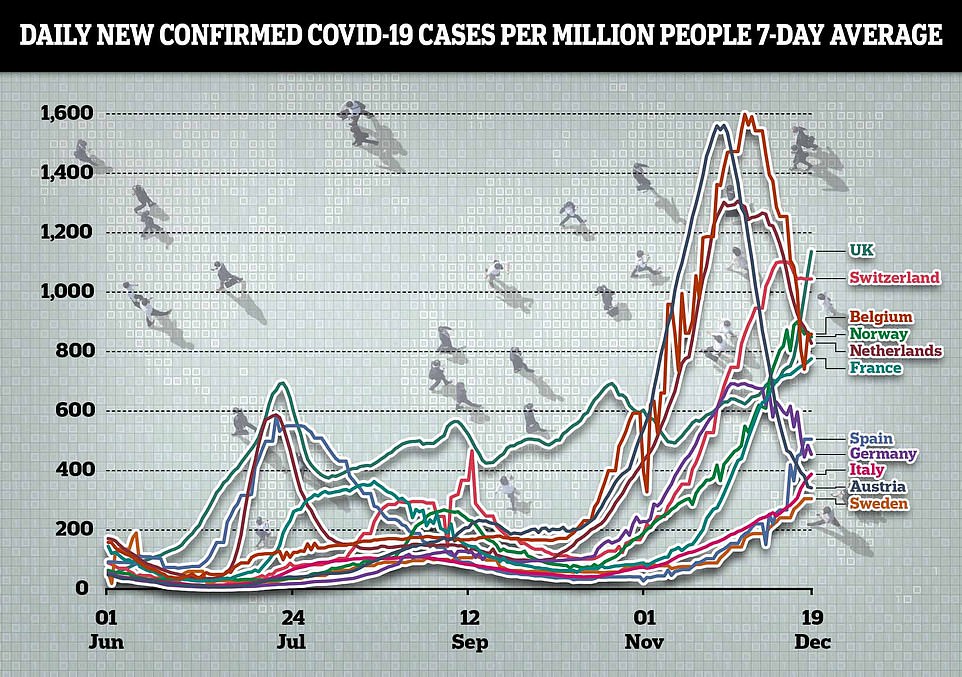 Austria, Belgium and the Netherlands have all seen cases fall from record highs in recent weeks after reimposing tough lockdown measures while infections continue to rise in most other countries

Britain is being singled out for travel curbs because of high case numbers and relatively high number of Omicron cases, but we are also carrying out substantially more tests and sequencing more of them for the presence of Omicron than most other European nations.

That leads to a skewing of the data because cases cannot be detected if they are not being looked for.

That will mean that many positive cases are being missed from official tolls, which is confirmed by data tracking the number of Covid tests which come back positive. Germany has one of the highest positivity rates in western Europe with around one in five tests coming back positive, compared to 1 in 14 in France and one in 25 in the UK.

Meanwhile, the UK is also sequencing a much higher proportion of tests to detect cases of Omicron – with the latest figures showing one in five British tests are being checked. Germany sequences fewer than one in 30 tests, while in France it is fewer than one in 50.

Only Austria is carrying out more Covid tests relative to its population size than the UK, and only Sweden is sequencing a greater share of the tests carried out.

Karl Lauterbach, Germany’s new health minister, even admitted on Sunday that the UK travel ban will not stop Omicron taking hold in his country – saying instead that the move is designed to slow the spread.

‘The longer it takes Omicron to get a grip on Germany, the better,’ he said.

That is despite the European Centre for Disease Control issuing updated guidance on Omicron last week which reiterated that border controls are likely to make little difference to the spread of the virus in the long-term.

In a situation report issued on December 15, the ECDC said travel restrictions imposed when Omicron first emerged were ‘designed to buy valuable time’ to assess the virus’s transmission rate and severity, but that most European countries have now confirmed cases and are experiencing community spread.

It did not recommend any travel curbs, and instead suggested increased social distancing measures at airports along with pre-departure and post-arrival testing to try and catch cases. 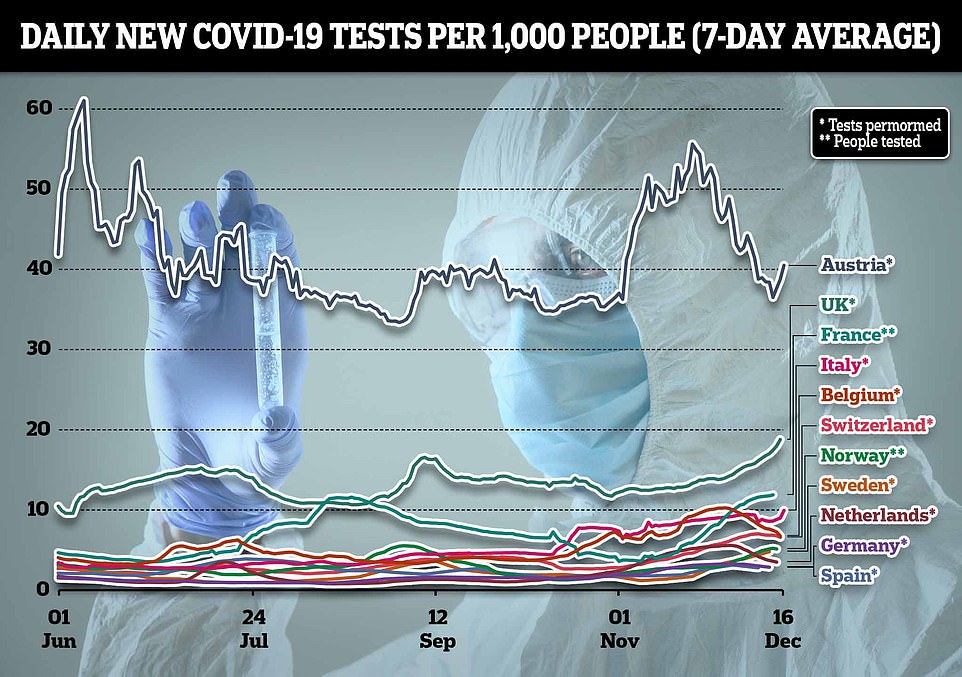 The UK is reporting some of the highest case rates in Europe, but is also testing far more than other nations in relation to the size of the population – with the notable exception of Austria (pictured above) 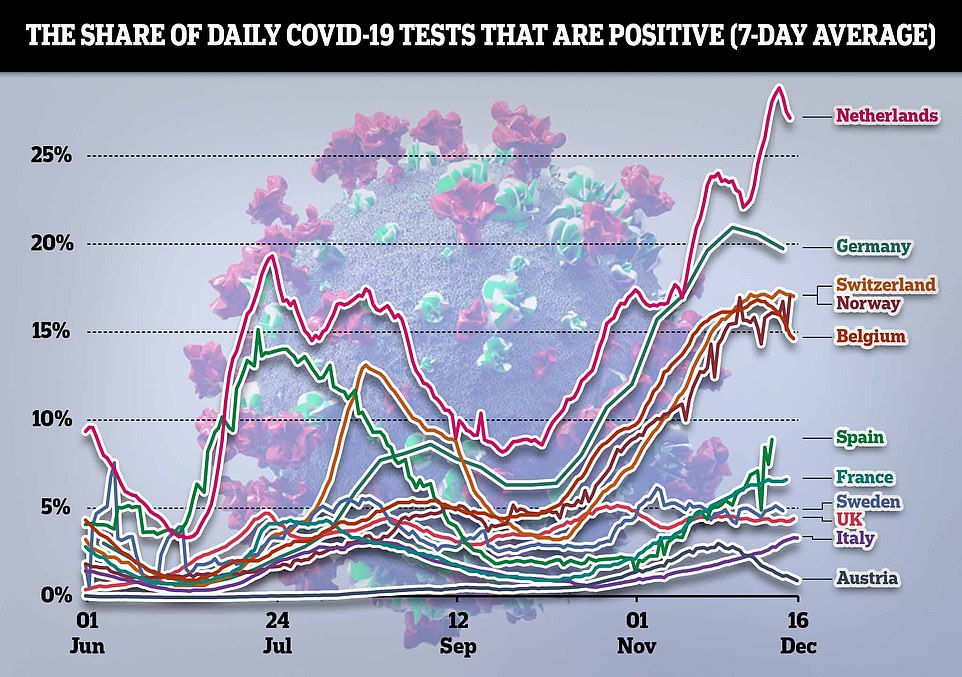 Test positivity rates suggest countries where large numbers of infections are being missed due to a lack of testing, with the Netherlands and Germany faring worst with the UK’s figure holding steady since mid-July

But, in light of Omicron’s rapid spread, even testing ‘will probably not be relevant for much longer’, it added.

The threat of travel bans comes against a backdrop of tightening domestic Covid restrictions on the continent, with the Netherlands becoming the latest country to impose full lockdown to slow the spread of cases.

Dutch cities were largely deserted as the country began a snap lockdown that left people’s Christmas plans in disarray.

Prime Minister Mark Rutte announced the shutdown Saturday, ordering the closure of all but essential stores, as well as restaurants, hairdressers, gyms, museums and other public places from Sunday until at least Jan. 14.

Omicron, a very contagious variant first detected last month in southern Africa and Hong Kong, has raced around the globe and been reported in 89 countries, the World Health Organization said on Saturday.

The number of Omicron cases is doubling around every two days in areas with community transmission, the WHO said, noting that much is still not known about the variant, including the severity of the illness it causes.

While the Netherlands took the plunge and shut down much of public life to prevent its healthcare system from being overwhelmed by an expected surge in cases, several other European governments are considering more curbs – at a time when people are normally spending money on shopping, entertainment and travel.

Britain reported a surge in cases of Omicron on Saturday, with 25,000 recorded so far. Government advisors said this could be the tip of the iceberg and health minister Sajid Javid declined on Sunday to rule out the chance of further COVID-19 restrictions before Christmas.

Javid said the government was taking the ‘sobering’ advice of its scientists seriously, was watching the data on an ‘almost hourly basis’ and would balance that against the broader impact of restrictions on areas such as businesses and education. 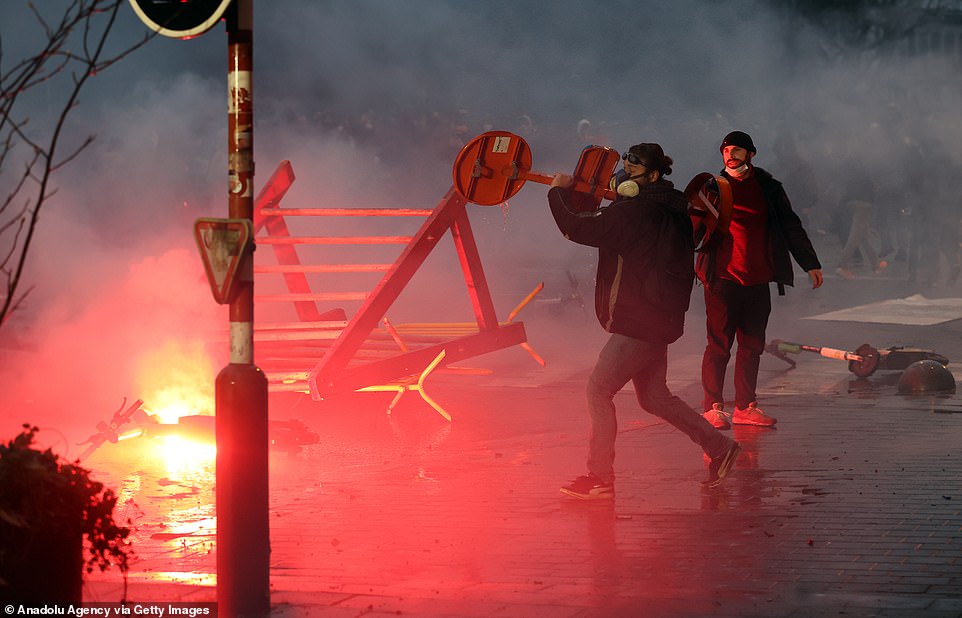 Protesters took to the streets of Belgium on Sunday to demonstrate against further Covid restrictions, though the country has not tightened its rules since late November when it enforced social distancing in indoor hospitality venues 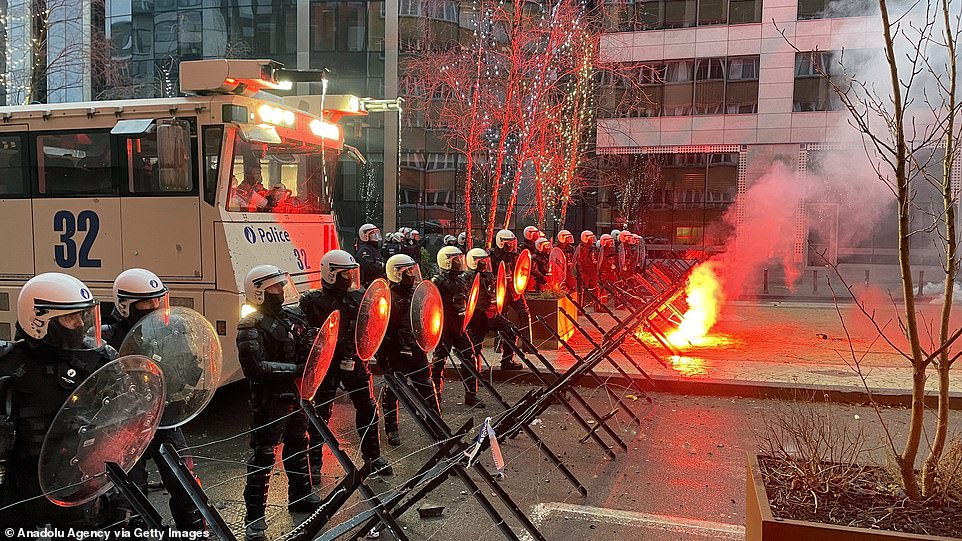 Police faced off with protesters hurling flares and road signs in Brussels on Sunday, the latest in a series of anti-lockdown protests in the capital which have been going on for three weeks 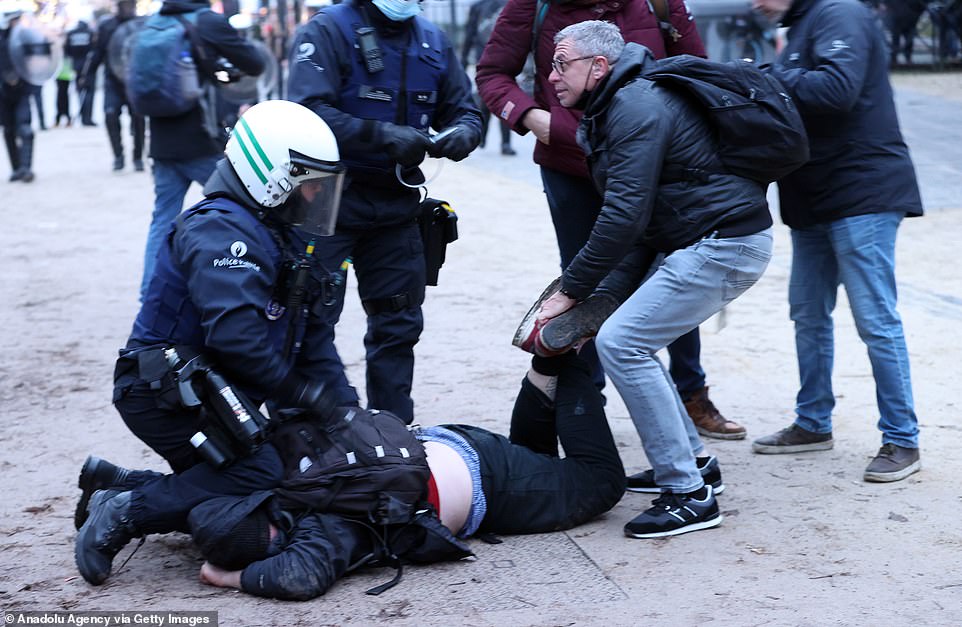 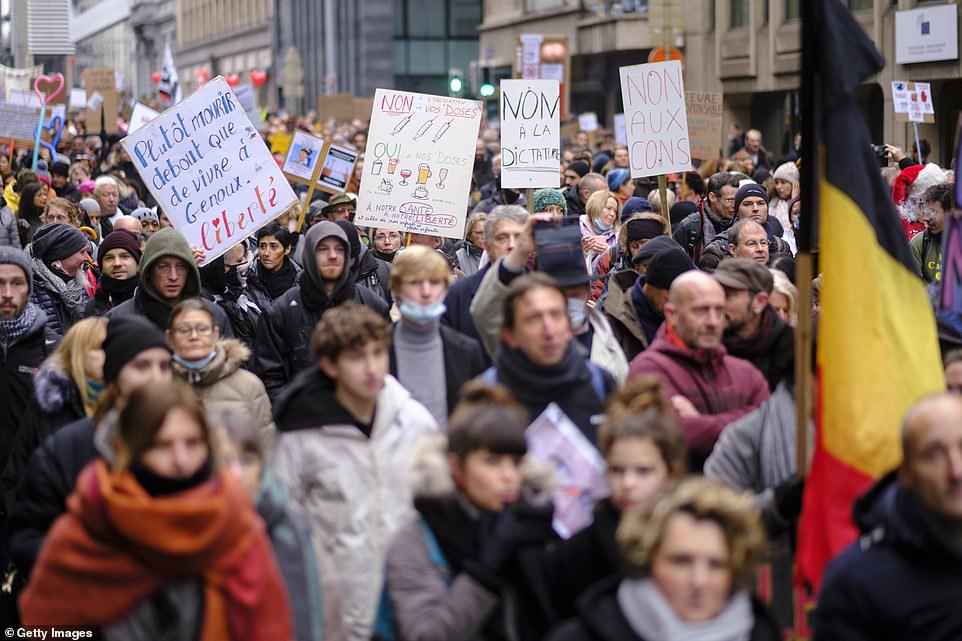 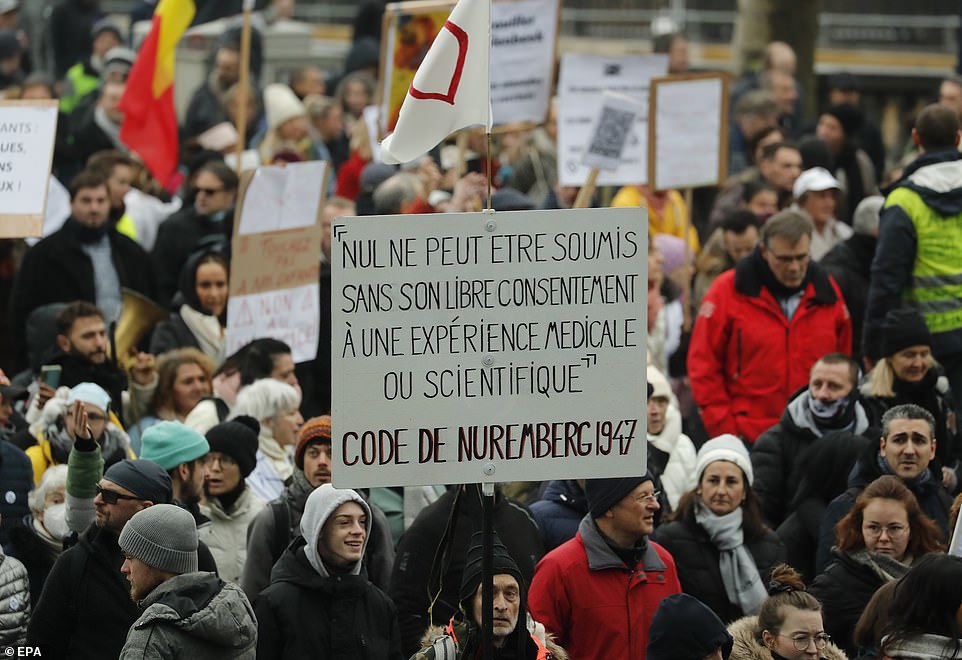 A protester carrying a banner that quotes from the Nuremberg Code, and says: ‘No one can be subjected without his free consent to a medical or scientific experiment’

Prime Minister Boris Johnson is reeling after a series of scandals and missteps, and more than 100 of his own Conservative lawmakers this week voted against the government’s latest measures to tackle COVID-19.

Javid said Johnson was not too politically weak to bring in further curbs if necessary.

In Italy, the government is considering new measures to avoid a surge in infections during the holiday period, local newspapers reported on Sunday.

After holding a meeting with ministers on Dec. 23, Prime Minister Mario Draghi could mandate that people who have been vaccinated also show a negative test to access crowded places, including discos and stadiums, daily Corriere della Sera reported.

Meanwhile, in Belgium, thousands protested for a third time against reinforced COVID-19 restrictions imposed by the Belgian government to counter a spike in infections as the omicron variant sweeps across Europe.

The marchers – some with placards reading ‘free zone,’ ‘I’ve had my fair dose’ and ‘enough is enough’ – came to protest the government’s strong advice to get vaccinated. They also included Belgian health care workers who will have a three-month window in which to get vaccinated against the virus beginning Jan. 1 or risk losing their jobs.

A strong police presence and widespread preventive controls were deployed for the march, given how previous protests had descended into violence. But only 13 arrests were made for ‘rebellion and possession of prohibited articles,’ according to police spokesperson Ilse Van de Keere.

Also Sunday, the Brussels-based European Commission agreed with Pfizer-BioNTech to accelerate the delivery of vaccines starting in a few weeks. The pharmaceutical giant will deliver an additional 20 million vaccine doses from January to March to the European Union’s 27 nations.

The Belgian protest comes one day after similar protests in other European capitals including Paris and London. 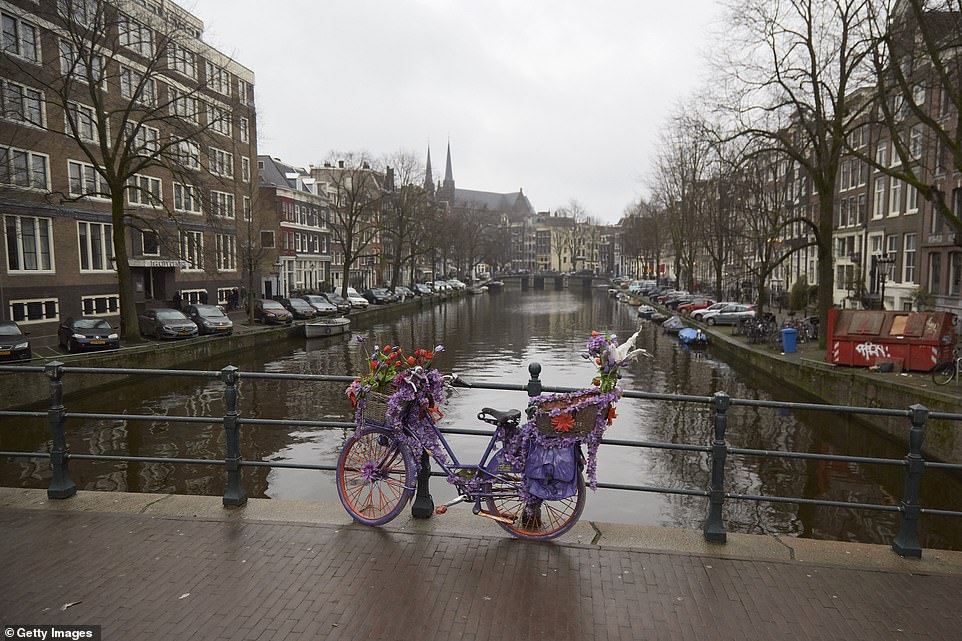 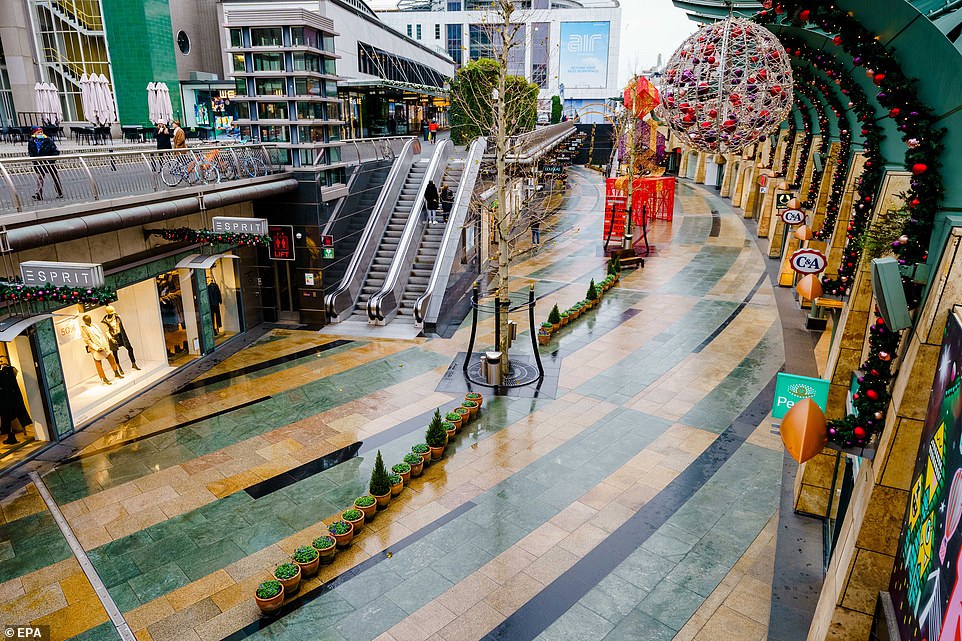 A shopping mall in Rotterdam, the Netherlands, is deserted just a few days before Christmas as the country begins another nationwide shutdown over rising Covid cases

Christmas chaos at Heathrow: British Airways passengers are sent home before they can collect their bags