BREAKING NEWS: Democrat Joe Manchin says he’s a NO on President Biden’s Build Back Better agenda claiming ‘I can’t get there’ 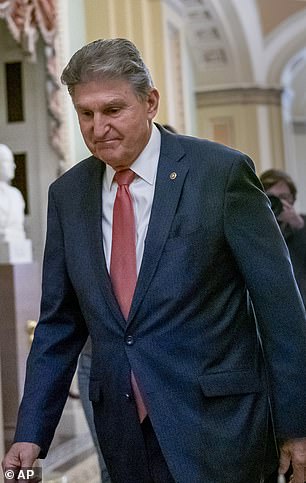 Joe Manchin definitively said Sunday that he is a ‘no’ on President Joe Biden’s Build Back Better social spending agenda after Chuck Schumer pushed a vote on the legislation until after the New Year.

‘I cannot vote to continue with this piece of legislation,’ the West Virginia Democratic senator told Fox News Sunday.

‘I just can’t,’ he continued. ‘I’ve tried everything humanly possible. I can’t get there.’

Speaking on the Senate floor on Friday, Majority Leader Chuck Schumer indicated the president’s Build Back Better bill (BBB) would be shelved until 2022 to give Biden more time to negotiate with Manchin.

‘The president requested more time to continue his negotiations, and so we will keep working with him, hand in hand, to bring this bill over the finish line and deliver on these much-needed provisions,’ he said without specifying a timeline.

Biden mentioned Manchin three times on Thursday in a statement admitting it was unlikely that Democrats would pass the $1.75 trillion social and climate reform bill before the end of the year.

‘In these discussions, Senator Manchin has reiterated his support for Build Back Better funding at the level of the framework plan I announced in September,’ he said.

‘I believe that we will bridge our differences and advance the Build Back Better plan, even in the face of fierce Republican opposition.’

‘The president put out a statement. It’s his statement, not mine,’ he told Politico on Friday.

Democrats had hoped to stick to Schumer’s goal of passing the legislation by Christmas, but Manchin continued to voice issues with the expiring child tax credit.

‘I thought we had resolved that,’ progressive Massachusetts Senator Elizabeth Warren also told the outlet.

Manchin, who along with Democratic Senator Kyrsten Sinema of Arizona have forced Biden to chip away at the bill’s original $3.5 trillion price tag, reportedly didn’t agree with using the legislation’s 10-year financing scheme to fund a one-year extension of the child tax credit.

But with his topline firmly set at $1.7, a longer extension would have only been possible if Democrats agreed to scuttle certain programs altogether.

Manchin snapped on Wednesday after reports his opposition to the Child Tax Credit killed Biden’s hopes for the Senate to pass the president’s signature Build Back Better bill by Christmas.

‘This is b******t. You’re b******t,’ the West Virginia senator yelled at a reporter who asked him about reports that the child tax credit has become a major sticking point in his talks with the White House.

‘Guys, I’m not negotiating with any of you all. You can ask all the questions you want. Guys, let me go,’ he told the press as he walked through the basement of the Capitol, muttering ‘God almighty’ as he walked away.

Manchin is taking the blame from Democrats for the failure to move forward on Biden’s signature legislation.

The moderate Democrat has refused to support the BBB bill as it stands and, in a 50-50 split Senate, the president needs every single Democratic vote to get his agenda through.

Sajid Javid is proud that 906,656 standard vaccines were delivered in England alone yesterday