Windows 11 is now officially available for download with several important changes. The new operating system offers the largest visual update of the recent arrival for Windows devices. The system comes with an all-new look and some updated ways to multitask and chat with friends.

Once you upgrade to the new version, you immediately notice the new design that comes with it. Some of the design and visual ideas came from macOS and Chrome OS, with rounded corners all around.

One of the first changes is a significant simplification of the Start menu and the removal of the Live Tiles panel for information, which appeared beginning with the release of Windows 8. The improved button gives you a less cluttered view and is easier to find your recent apps and documents.

Overall, the user interface in Windows 11 is designed with deeper colors throughout. This makes Windows 11 appear more modern and modern than previous systems.

Although you can return the central taskbar icons to the traditional left corner instead of the center of the screen, you cannot completely unpin the taskbar and move it freely or pin it to the sides as you did in previous versions. 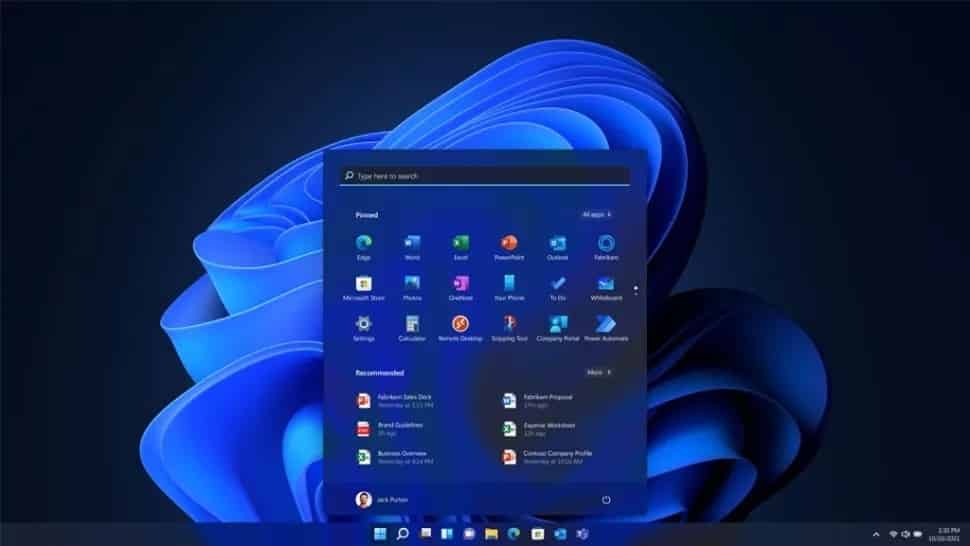 To customize the taskbar, you should head to the new settings interface, which looks more modern and less complicated than previous versions, andNavigating between settings is a lot easier now with color hints and icons that help you easily identify sections. 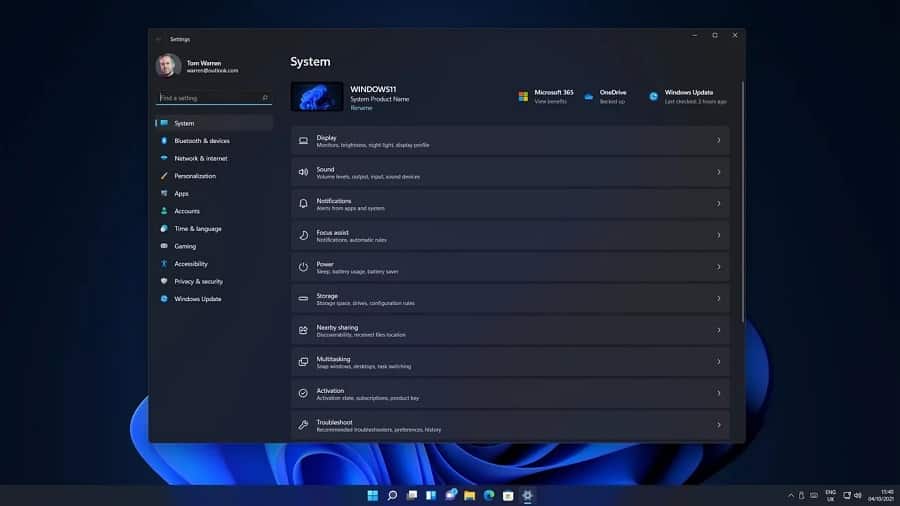 The operating system comes with Microsoft Edge, which is the default web browser, however, you cannot change it to any other browser easily, as the company has greatly increased the switching steps and there is no direct way to switch it except at the initial setup of the operating system.

The company also worked to integrate the Microsoft Teams video calling application into Windows 11. This application is the default application for voice and video calls, meetings, and screen sharing. 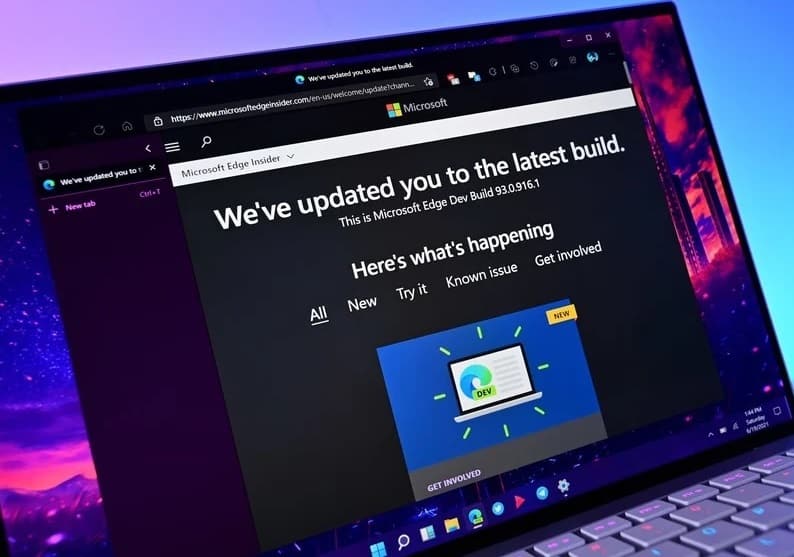 The company has also simplified the system tray, audio settings panel, and network controls. And the notification center in Windows 11, however, the design of the volume indicator remains unchanged.

One of the most noticeable improvements in Windows 11 is the multitasking feature, as the company has brought together all aspects of multitasking. And present it in a single feature called Snap Assist, which is a button that appears when you press the screen magnification button in most applications.

This enhancement is a great way to position apps the way you want them to appear on multiple monitors or virtual desktops.

Windows 11 remembers previous Snap layouts and presents them in groups on the taskbar. This should help get all your apps back together if you close or restart some of them.

Microsoft has also added a smart way to dock and undock laptops. With Windows 11, where to put your apps so they don’t move around your screen.

The way the new feature works should help you when you resume from sleep mode because some screens take time to wake up and then rearrange your apps.

Optimizing the App Store in Windows 11

The improved Microsoft App Store is one of the biggest changes that many users and developers alike have been waiting for. And the new Store looks more and better than its previous versions, as Microsoft finally allowed developers to submit any application to the Store.

This would enable third-party browsers and traditional desktop applications to appear in search results.

Microsoft is now expected to make its redesigned Store available to rival app stores such as the Amazon App store, the Epic Games Store and Steam.

The Microsoft Store comes with a simpler design and ease of use, as you now find a special section containing app updates and purchases. and individual sections for apps, games and entertainment.

And Microsoft made a lot of improvements to the applications built into the system, specifically the Paint, Clock, and Photo applications. 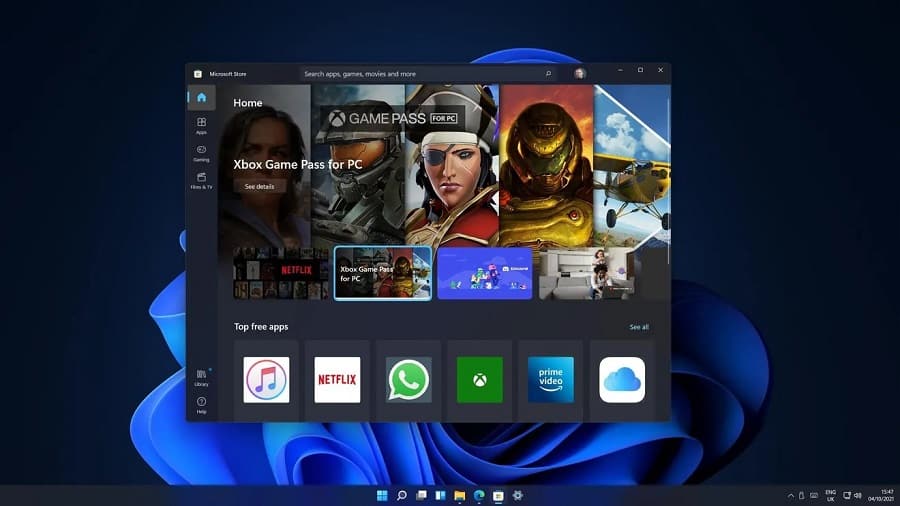 The Paint app is updated with a new command bar that borrows most of the same options and tools as the Paint interface in the previous version.

While the Photos app also includes a redesign with a nifty multi-view feature that lets you compare a set of photos in a single window.

By dividing the work into smaller parts with short breaks.

Support for games in the new operating system

This version is expected to be the best gaming operating system to date, thanks to the Auto HDR feature, which automatically optimizes compatible games, and the company has also added support for the DirectStorage software interface found in Xbox platforms.

Microsoft has also integrated its new Xbox app into Windows 11, and this provides a better way to download and install games from Xbox Game Pass, and also includes the ability to stream Xbox games from xCloud.

If you’re using a touch screen laptop or tablet, the touch keyboard has been greatly improved with 13 new themes, the ability to customize the keyboard with background images, and the system comes with new touch gestures that you can use for navigation. 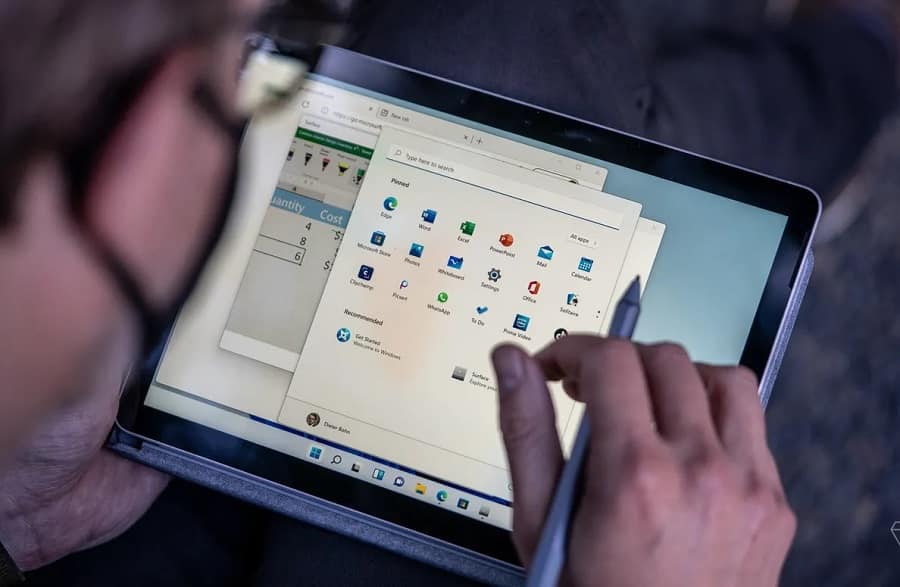 The most prominent missing features in Windows 11

The redesigned taskbar is one of the most inconspicuous elements in Windows 11 due to missing basics such as the ability to set the taskbar size or position and drag and drop on the taskbar is also missing.

You also cannot display the time and date on the taskbar on multiple monitors, and the feature to put small icons on the taskbar has disappeared, and you cannot Hide the system icons from the system tray section of the taskbar, and right-clicking the settings shortcut will appear instead of the previously usual task manager option.

And the dark mode is still not sufficiently optimized, with many dialog boxes and parts of the system still looking bright white even if you activate the system-wide mode, The system does not support the option to automatically switch between normal and dark lighting modes based on the time of day.

Should you upgrade to Windows 11

The company has Making some huge changes It has the minimum requirements to run the new Windows 11 system.

Read also: Microsoft will not prevent you from installing Windows 11

Google tests drone shipments from the rooftops of shopping malls