Samsung has come a long way in a whole new class of smartphones with the release of the 3rd generation Galaxy Z Fold 3 foldable phone.

nAs a result, the company has proven that foldable phones are ready for the average consumer.

Samsung has put a lot of effort into releasing a foldable phone that is the best yet.

In addition, the phone comes with a more flexible design while offering more functionality than you can get in any other foldable phone today.

Galaxy Z Fold 3 comes with a book-like design where the two screens combine with a hinge mechanism that allows you to fold and open it.

And the company made notable improvements to the hinge, which became more flexible when the phone was folded and opened frequently.

The design has become more durable. AndSamsung claims that its foldable phone is more powerful by 80 percent from the previous model.

In general, the design of the phone looks great despite its heavy weight and thick size, as it weighs up to 271 grams.

It also features a water resistance rating of IPX8. But this means that you will not be able to carry it everywhere especially when you go to the beach. And that Because it is not dust-resistant as grains of sand are the number one enemy of the phone until the company finds a solution for it in the upcoming models.

But what is certain on the other hand is that the price paid is worth because you are able to use a smartphone with a large screen that looks like a tablet.

Both screens on the Galaxy Z Fold 3 feature Dynamic AMOLED display. As a result, they are protected by Corning Gorilla Glass Victus. The cover screen is 6.2 inches and has a resolution of 832 x 2268 pixels.

Moreover, the internal screen comes with a size of 7.6 inches and a resolution of 1768 x 2208 pixels when opened, with support for a refresh rate of 120 Hz. Beside An aspect ratio that allows you to read e-books and browse websites easily and smoothly.

The Galaxy Z Fold 3’s cameras are pretty good. But not a pioneer, where excel It has Samsung S21 Ultra Galaxy cameras.

On the other hand, the Galaxy Z Fold 3 comes with a camera technology at the bottom of the screen UDC 4 megapixels. Which according to the company is suitable for video calls.

and used All rear lenses are a 12-megapixel sensor, while the camera comes in a 10-megapixel cover screen.

The phone comes with a processor Snapdragon 888. Additionally there 12GB RAM and 256/512GB storage space.

The phone works with the version of the Android operating system 11. On the other hand, it supports the fingerprint, the voice assistant Bixby, and the desktop experience via Samsung DeX and Samsung Pay.

In addition, the phone does not support expanding storage via a microSD card. It comes in three color options, black, silver and green, with support for shooting video in quality up to 4K for all cameras. 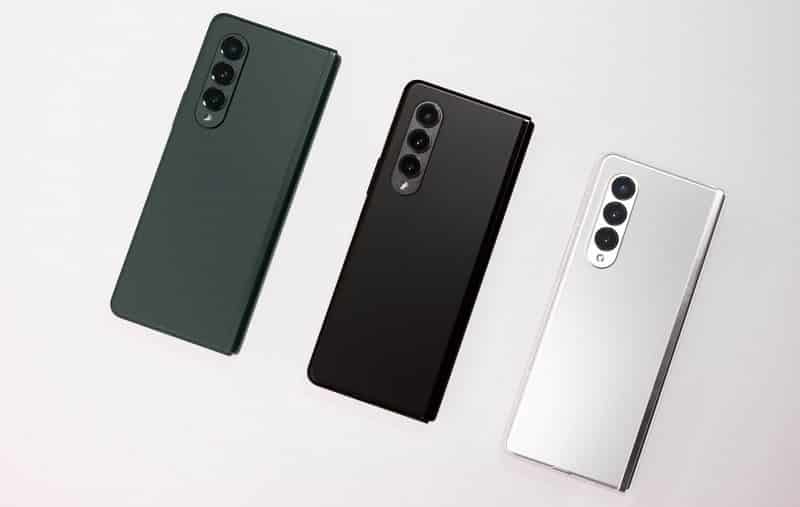 The battery capacity of the foldable phone is 4400 mAh, with support for fast charging of 25 watts, wireless charging of 11 watts, and it supports charging via USB Type-C 3.2 port. There is no charger included in the phone box.

Read also: Foldable phones and their most important manufacturers

Samsung has launched two models of the S Pen that are compatible with the Galaxy Z Fold 3 and support the feature Air Command To control without touching. But both pens are sold separately.

As a result, if you want additional Bluetooth and gesture features, you have to purchase a model S Pen Pro Which comes in a slightly larger size. He is a designer To return the tip if too much pressure is applied. The stylus is compatible with any Galaxy device that supports S Pen.

Should you buy the Galaxy Z Fold 3 foldable phone

You can buy the phone if you From users who are interested in buying everything new in the world of smartphones aAnd you need to write notes frequently, practice drawing a lot, or watch a lot of videos or playing games. But the phone is not suitable for people who care With photography, it doesn’t have the best camera.

It is worth noting that the phone is now available for pre-order on Amazon Saudi Arabia, With a 25 percent discount, an S Pen and a wireless charger, starting at 6799 SAR, in addition to free shipping.

Android users are not interested in upgrading to iPhone 13

The Masquerade - Bloodhunt is slated to release on PS5 this year

Summary of all Microsoft 2021 Surface Event announcements
3 mins ago

When can you upgrade to Android 12
9 mins ago