Bridget Moynahan said she had no comment on the rape allegations against her Sex and the City co-star Chris Noth, insisting that she doesn’t ‘know anything about’ it so it would be ‘inappropriate’ for her to comment.

But the 50-year-old actress, who reprised her role as Mr. Big’s ex-wife Natasha Naginsky in HBO Max’s And Just Like That, did say she was fine with his character’s death in the new season.

‘I thought it was okay. It made sense,’ she told Elle.

Last week, Noth, 67, was accused of rape by two women, who both shared details of their alleged assaults with The Hollywood Reporter — with one of the women saying she was just 22 when Noth, then 49, attacked her and left her needing stitches.

The report led another woman to come forward and accuse Noth of groping her, while actress Zoe Lister-Jones recalled behavior that made her describe him as a ‘predator.’ 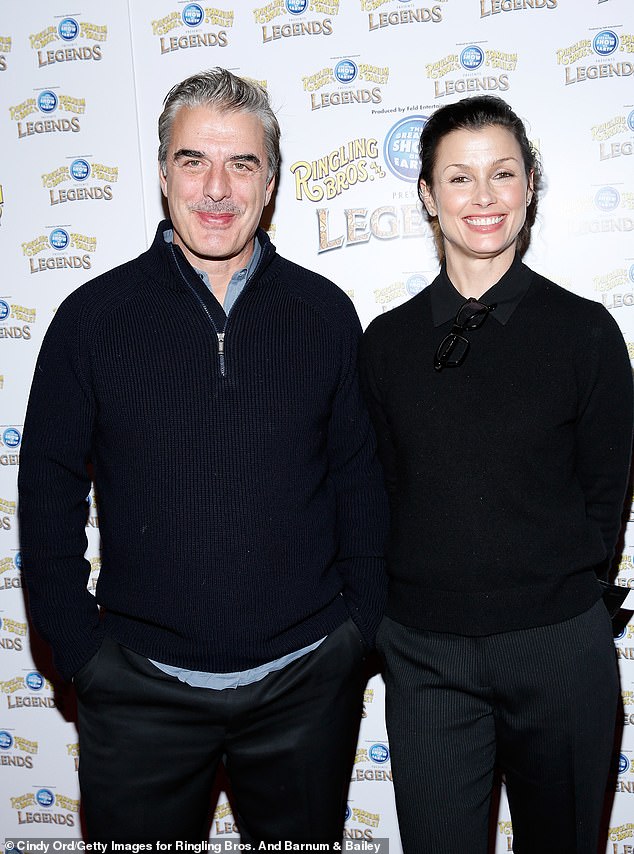 Bridget Moynahan said she had no comment on the rape allegations against Sex and the City costar Chris Noth, insisting she doesn’t ‘know anything about’ it (pictured in 2014) 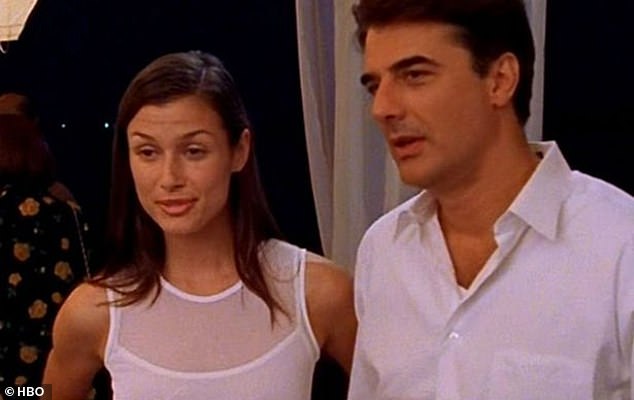 The actress plays Natasha Naginsky, who was briefly married to Noth’s character Mr. Big in the original Sex and the City series 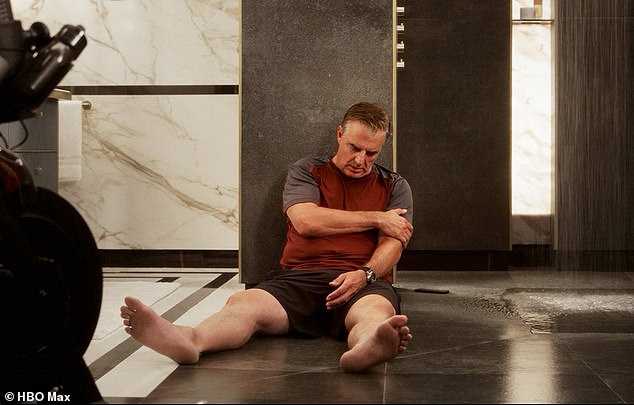 She did say she was fine with his Noth’s death in the new reboot, And Just Like That, saying: ‘I thought it was okay. It made sense’

Moynahan decline to comment on the allegations when asked about them by Elle.

‘I don’t know anything about… it would be inappropriate for me to comment on things I don’t have any knowledge of,’ she said.

She readily discussed the show, however, and did give her thoughts on Big’s death by heart attack in the premiere.

‘It’s part of life — it’s part of the lives of women and men of a certain age,’ she explained of why she thinks the death made sense.

‘It’s what’s happening. To me, it was like, “Okay, this is the way that they’re jumping into it, ripping off the Band-Aid.” Good for them [for] being bold and being real.

‘I’m seeing friends of mine have real emotional, grieving responses to the first two episodes. Like, sobbing. These characters have been part of people’s lives for so long and they have really gotten invested in the characters’ lives; they are grieving for someone they feel like they have known.

The actress also admitted that she was ‘thrilled when I got the phone call’ to come back for the reboot, after ‘kind of feeling left out of the party’ when she didn’t get to be in the movies. 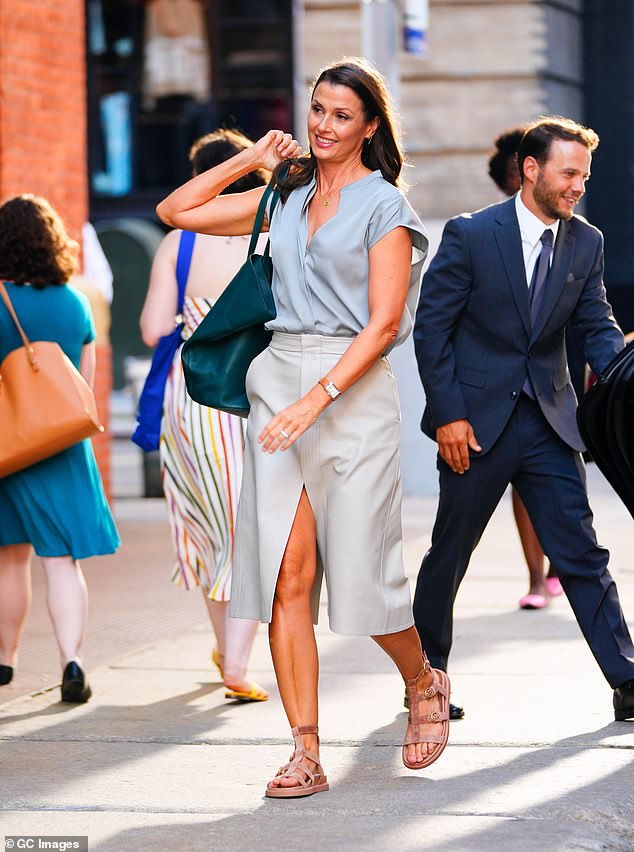 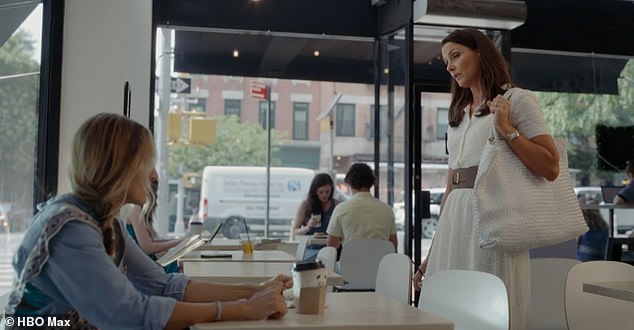 And though she reserved comment about Noth, she sang Sarah Jessica Parker’s praises.

‘Sarah Jessica Parker is such a pro. Her comedic timing, her expressions, the way she makes adjustments… she really is so good,’ she said.

Last Thursday, The Hollywood Reporter published the explosive allegations against Noth, which the actor has vehemently denied.

In the report, both accusers — who went by pseudonyms Zoe, now 40, and Lily, now 31 — claimed that Noth raped them from behind in front of a mirror. The first attack allegedly took place in 2004, while the second reportedly occurred in 2015, three years after Noth married his wife, Tara Wilson, with whom he has two children.

Both women claimed that the recent publicity surrounding the Sex and the City reboot ‘stirred painful memories’ of their encounters with Noth and ‘triggered’ them to go public with their claims.

The first, Zoe, said she met Noth while working ‘in an entry-level position at a high-profile firm where Noth and other celebrities regularly had business’ in 2004. She claimed that the actor — who was then at the height of his Sex and the City fame and, according to Zoe’s then-boss was seen as a ‘god’ by her and colleagues — began flirting with her in the office. 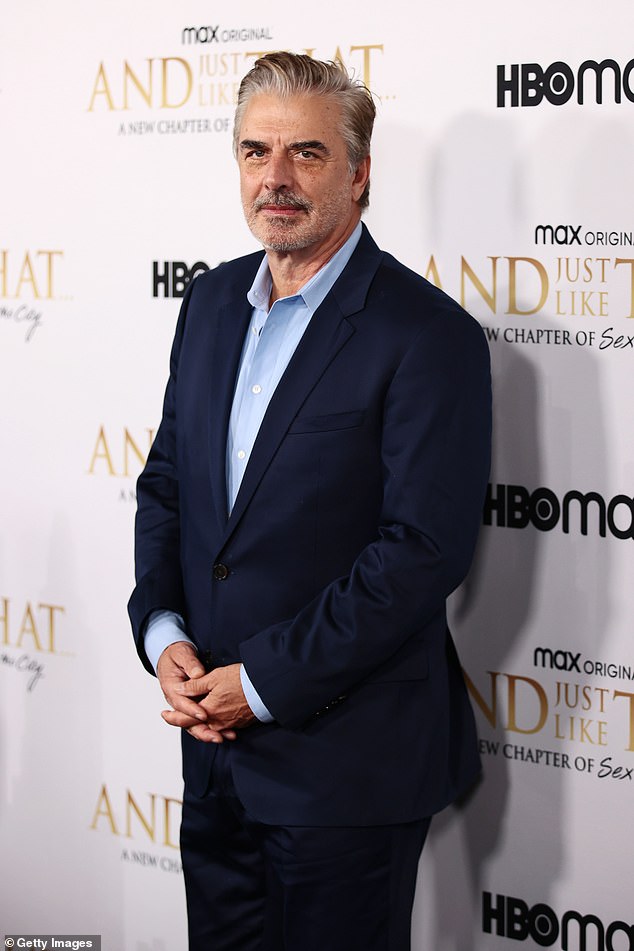 Last Thursday, The Hollywood Reporter published explosive allegations against Noth, with two women claiming that he raped them 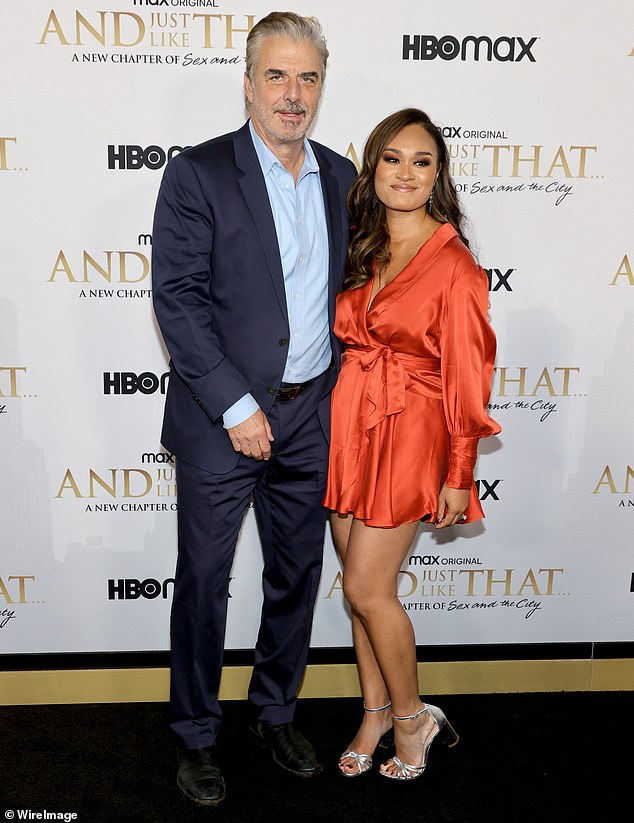 Noth, pictured with his wife Tara Wilson this month, denied the allegations against him

At the time, Noth had been dating his now-wife Wilson for three years; the pair began their relationship in 2001 after first meeting at The Cutting Room, a New York jazz club owned by the actor where Wilson, who was in her early 20s at the time, worked as a bartender.

However, according to Zoe, Noth began leaving ‘flirty’ messages on her voicemail — which she was alerted to by her boss.

Zoe claimed that she was raped by Noth in his West Hollywood apartment when she returned a book he had lent her.

She said he ‘kissed her’ as soon as she walked through the door, then moved her to his bed and removed her shorts and bikini bottoms before raping her ‘from behind’ while they were ‘facing a mirror.’

She also claimed that the actor did not use protection, that he ‘laughed at her’ when she asked him to get a condom — and that she was left bleeding after the assault, and had to go to the hospital to get stitches.

‘I had stitches. Two police officers came. I wouldn’t say who it was,’ she says, claiming that she feared she would ‘not be believed’ and could ‘be fired’ if she publicly accused Noth of rape. 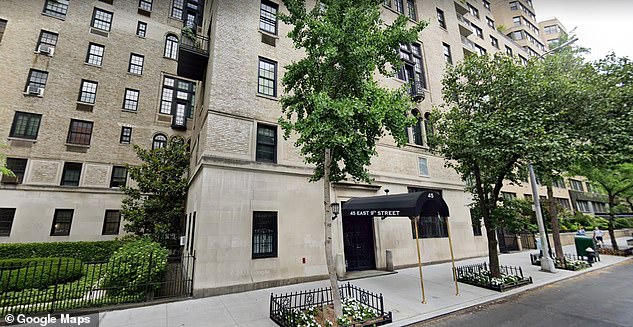 One woman claimed that the alleged attack took place in Noth’s Greenwich Village apartment ( pictured) and that he raped her from behind, in front of a mirror 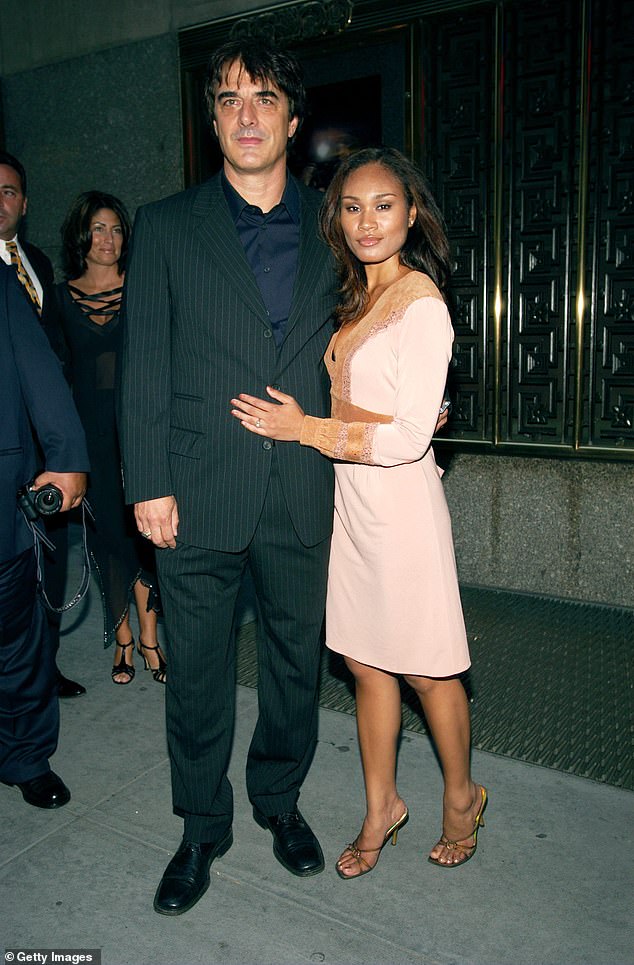 Noth and Wilson (pictured in 2002) met while she was working as a bartender at New York jazz club The Cutting Room, which the actor owns

Noth’s second accuser, Lily, who is now working as a journalist, told a similar story to THR, alleging that the actor raped her in his home in Greenwich Village after they struck up a flirty relationship while she was working as a server at former New York nightclub No.8 in 2015, when she was 25.

At the time, Noth — who was then 60 years old — had been married to his wife for three years and the couple had one child together, Orion, who was born in 2008. They have since had a second son, Keats, born in 2020.

Lily said she was ‘truly star-struck’ when he began ‘hitting on her’ and ended up going with him to a restaurant.

Afterward, Noth invited her back to his home to ‘sample his collection of whiskeys’ — and says he began trying to ‘make out with her’ when they got there.

‘I should have said no more firmly and left,’ she said, claiming that ‘the next thing she knew’ he had pulled down her pants and ‘was standing in front of her’ before ‘thrusting his penis into her mouth.’

She said that she mentioned the fact that he had a wife and child, only for the actor to tell her that ‘marriage is a sham’ and ‘monogamy is not real.’ Lily claimed Noth then raped her from behind in a chair in front of a mirror.

‘He was having sex with me from the back in a chair. We were in front of a mirror. I was kind of crying as it happened,’ she says

After the report was published, Zoe Lister-Jones described Noth was a ‘sexual predator’ 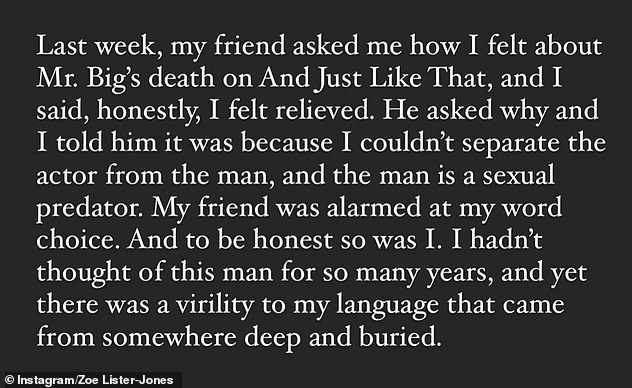 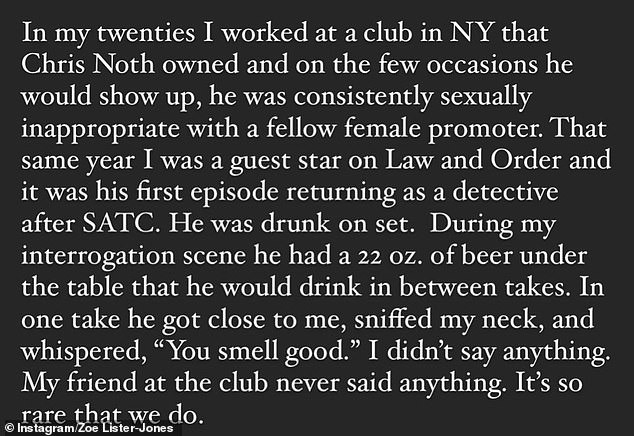 In her Instagram story on Thursday, Lister-Jones said she was ‘relieved’ by Big’s death because she remembers him being ‘consistently sexually inappropriate’ with a female promoter

After the alleged assault took place, Lily said she went to the bathroom and put on her skirt, claiming that she ‘felt awful’ and ‘totally violated.’

‘All of my dreams with this star I loved for years were gone,’ she added.

In a statement to The Hollywood Reporter, Noth admitted that he had ‘consensual encounters’ with the two women, but he strongly denied any accusations that he assaulted them.

‘The accusations against me made by individuals I met years, even decades, ago are categorically false,’ the statement reads.

‘These stories could’ve been from 30 years ago or 30 days ago — no always means no — that is a line I did not cross. The encounters were consensual.

‘It’s difficult not to question the timing of these stories coming out. I don’t know for certain why they are surfacing now, but I do know this: I did not assault these women.’

Though Officer Drake Madison of the LAPD initially told Deadline on Thursday that ‘there is no investigation at this point’ into the claims against Noth, an LAPD spokesperson later told People that they are ‘looking into the nature of the report’ and trying to figure out ‘when, where or even if a report was filed.’ 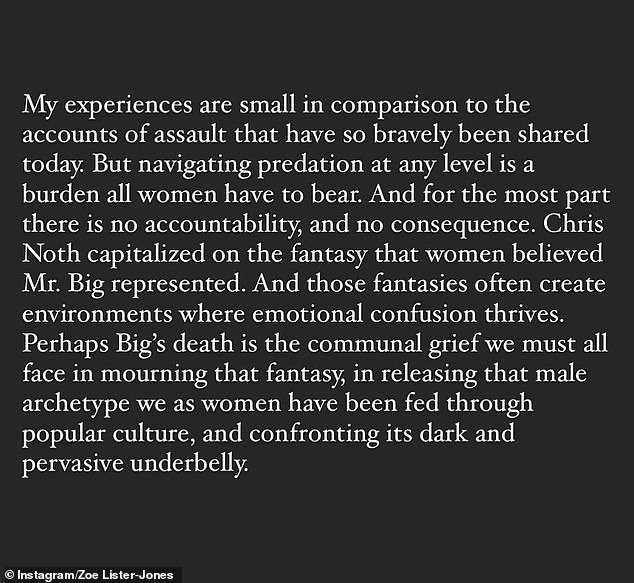 She also recalled him sniffing her hair when she guest starred on Law and Order: Criminal Intent

She concluded her statement by cursing out Noth’s character on Sex and the City, claiming that he capitalized on the role to seduce women

However, Officer Madison added: ‘At this time, there’s no record of a report being filed. Without a report, there is no investigation.’

Late on Thursday, actress Zoe Lister-Jones also detailed her encounters with the embattled actor, claiming that he was ‘sexually inappropriate’ to women who worked at a New York City club he owned, and sniffed her neck while drunk on set of the detective show.

‘Last week, my friend asked me how I felt about Mr. Big’s death on And Just Like That, and I said honestly, I felt relieved,’ she wrote on Instagram.

‘He asked why, and I told him it was because I couldn’t separate the actor from the man, and the man is a sexual predator,’ she went on, before detailing some of her experiences.

Then a third woman accused Chris Noth of sexual assault for allegedly groping her at a Manhattan restaurant in 2010 when she was 18.

The unnamed 30-year-old Canadian tech executive claimed Noth, then 55, groped her while she was working as a hostess at the Da Marino restaurant in Midtown, the Daily Beast first reported.

Noth came in intoxicated, allegedly telling her, ‘I love Canadian women’ as he pressed her against ‘his erection.’

‘I remember how electrifying his hand, the hand I watched hold Carrie Bradshaw in Sex and the City, felt grabbing me,’ Ava said.

She claimed Noth then followed her into the back office and began kissing her and pressing her against a desk.

She alleged that that he pulled down her tights and touched and clung onto her so strongly that after she managed to push and kick him away, her ‘limbs hurt in the morning.’

‘It felt as though I was the only person in the universe who could hear me saying no,’ she told the outlet.

She said the actor also felt her tampon and asked if she was at the end of her period before continuing to grope her.

Despite Ava’s protests, Noth allegedly carried on until she told him ‘not here,’ convincing him that they could carry on somewhere else.

‘I haven’t been able to shake the memory of how the kitchen staff looked at me as I emerged from the office with Chris Noth,’ she said.

Noth’s publicist told the Daily Beast that the actor ‘denies this as ever happening and has no idea who this woman is.’

An Airbnb host goes viral after a guest shares a crazy list of rules, regulations, and instructions

Covid cases soar above 90,000 again as Christmas hangs in the balance