Angry Britons have revealed how they can only see their loved ones through the windows of care homes while Boris Johnson and staff drank cheese and wine in Downing Street Park.

Downing Street insisted that it was not a social event, and instead claimed that employees were working in the park in the afternoons and evenings.

Dominic Raab also defended the Prime Minister today, saying a drink “after a long day or a long week” did not go against regulations when asked about the photo – and noted that Mr Johnson was wearing a suit.

The photo was taken while the UK was in a lockdown, with only two people from different families allowed to meet outside while socially apart.

However, the photo shows three groups of people – including Boris and Curry – with bottles of wine and alcohol at their tables.

Angry Britons have now spoken of the sacrifices they were making to comply with the lockdown restrictions on the same date.

Stephen Lawton has revealed that he can’t see his dying mother because she’s “breaking the rules”.

He said, “On the left is my last picture of my mother alive in May 2020. She is living alone with a serious illness, and she has faced the pandemic with stoicism.

We went for a walk around her local park. When I suggested sitting two meters apart in her garden, I said: Better no, it’s against the rules.

Dr. Ajay Verma, a gastroenterologist, remembers observing a minute of silence in the hospital ward in memory of those who lost their lives in the pandemic.

He said: “On Friday May 15, 2020 at 1pm, we observed a minute’s silence in our ward (and throughout the hospital) in memory of those who died of Covid – we didn’t know the Prime Minister and friends were enjoying a garden party in the same way. afternoon.’ 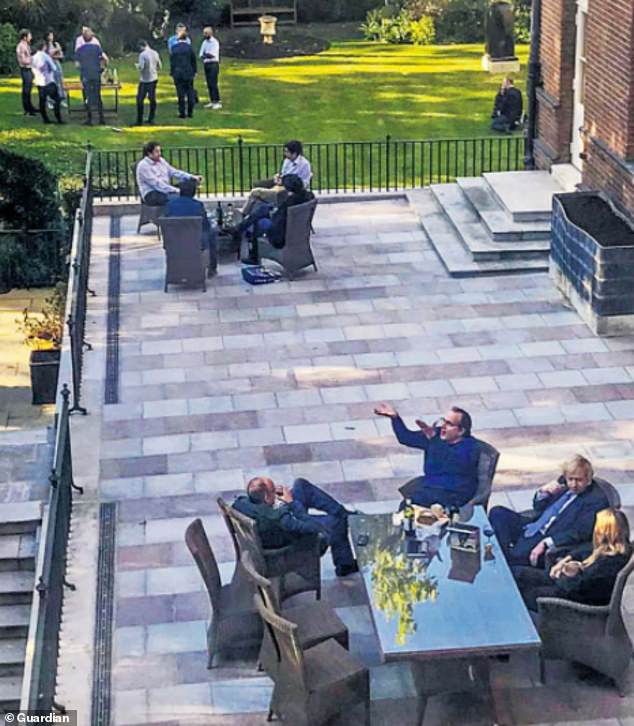 The photo was pasted to the front page of the Guardian newspaper on Monday morning. Pictured on the right is Boris and Carrie, apparently holding their newborn baby, Wilf 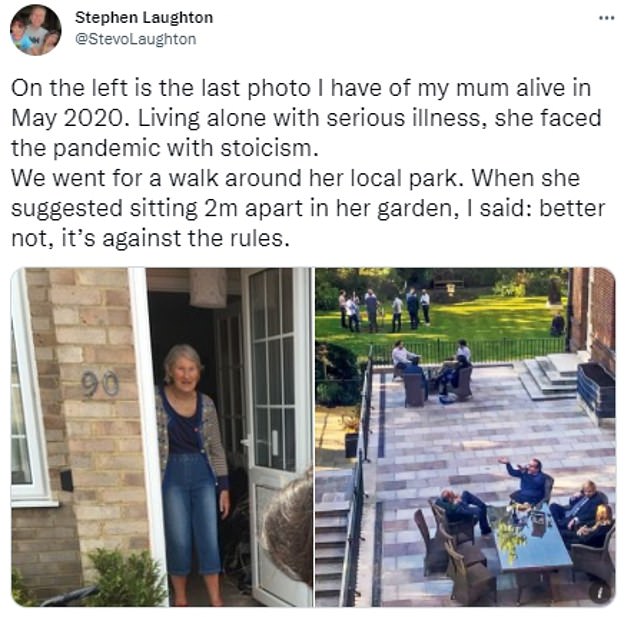 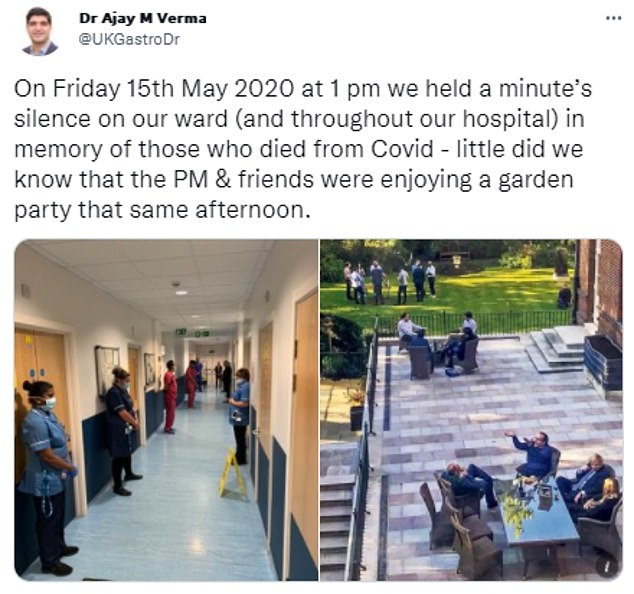 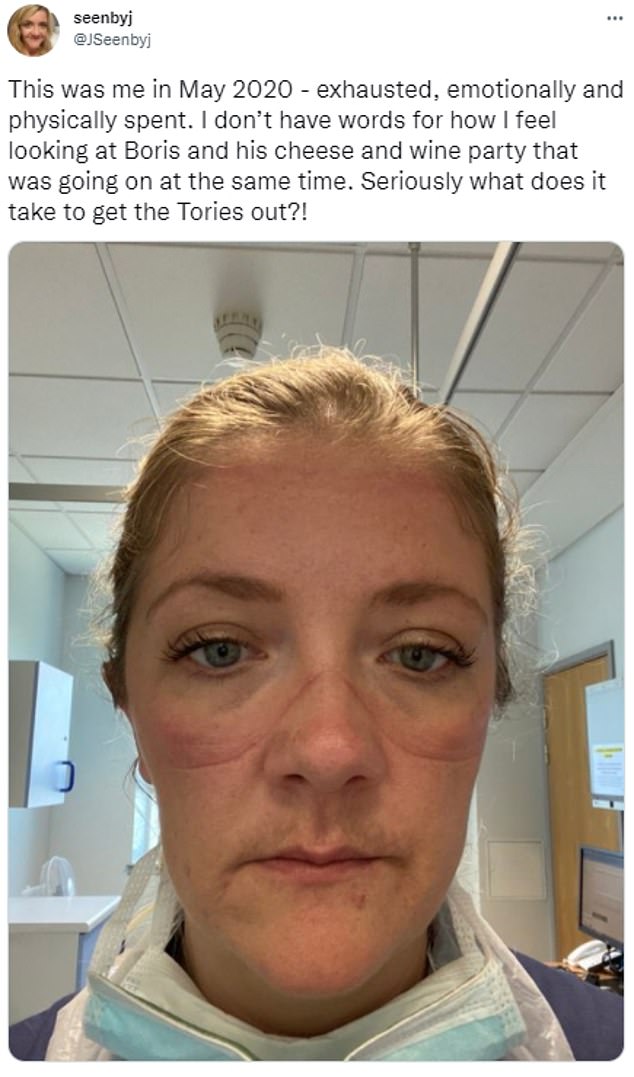 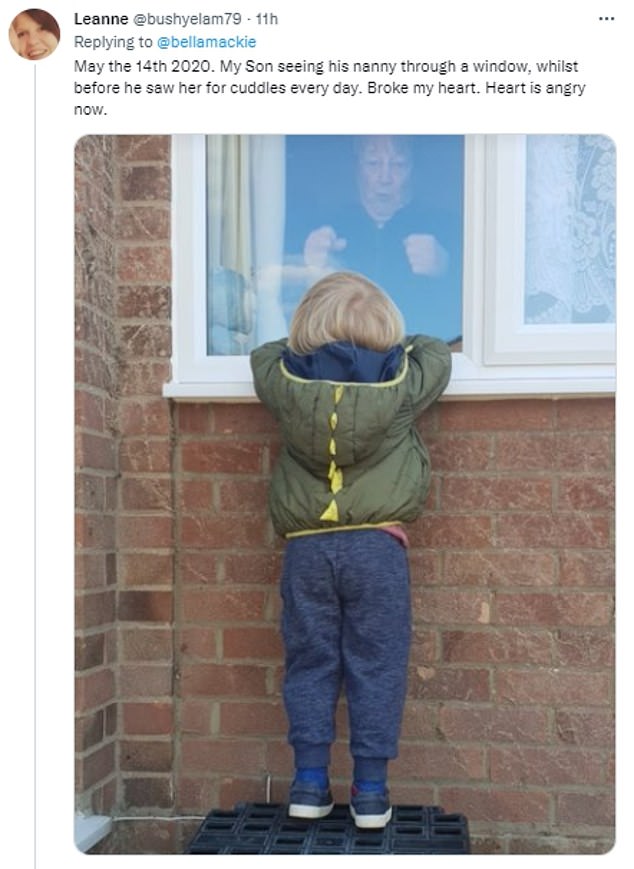 Brits shared their outrage on social media by comparing what they were doing on the same date as the apparent social gathering in Downing Street Park. 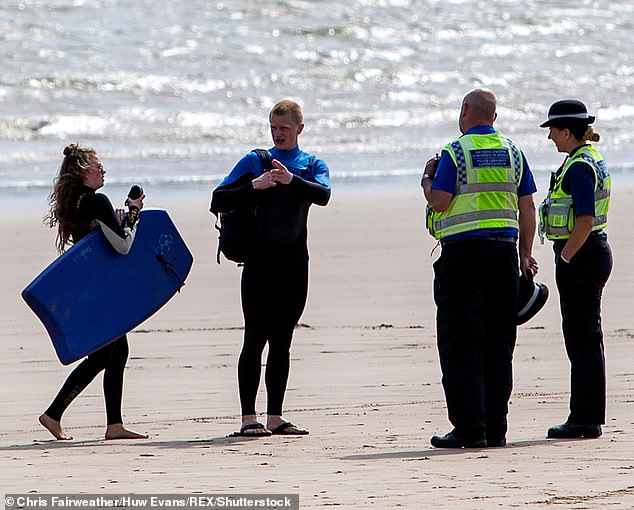 Police stop two bodies at the border before entering the waters in Wales on May 9, 2020 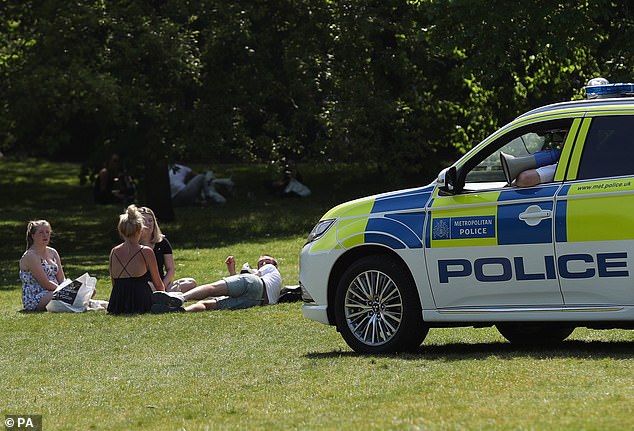 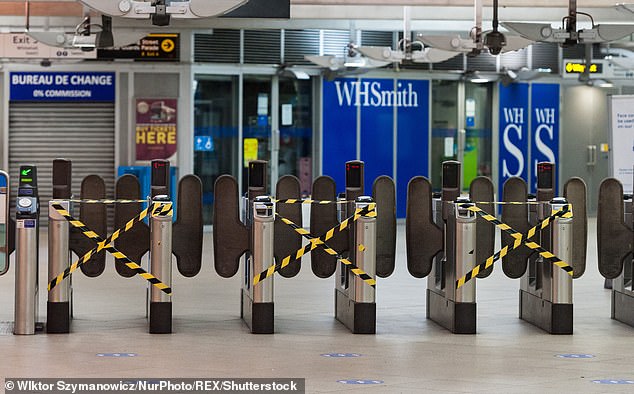 Social distancing measures including floor markings and blocked gates at Westminster Tube Station on May 15, 2020

Prime Minister Boris Johnson addressed the country from Downing Street on May 10, 2020, to outline the first incremental steps towards easing restrictions.

He praised those who “showed common sense to support those rules by an overwhelming majority” and described the “enormous suffering” the country had to endure.

However, the rules remained consistent, and schools were still closed at the time of the speech.

For this purpose, Mr Johnson confirmed the introduction of larger fines for those found to be in breach of the restrictions. They went from £60 to £100, doubling for each offense with a maximum of £3,200.

All non-essential shops and businesses on High Street, including restaurants, remained closed and people were ordered to stay indoors except for essential purposes.

The government has also urged those who can work from home to do so, while passengers have been asked to avoid public transport.

A nurse specializing in lung tumors added: “I was in May 2020 – emotionally and physically exhausted.

I have no words for how I felt looking at Boris and the cheese and wine party that was going on at the same time. Seriously, what would it take to get the Conservative party out?! “

One mother also shared a photo of her son having to talk to his grandmother through a window due to restrictions just a day before the photo was taken in Downing Street Park.

She said: ‘May 14, 2020. My son sees his nanny through the window, as he sees her before he cuddles with her every day. broke my heart. The heart is angry now.

Pictures also showed police walking through Greenwich Park in south London using a megaphone to talk to small groups strolling in the sun on May 9.

Officers were also filmed preventing two of the bodies from entering the sea on the same day as Downing Street staff enjoyed cheese and wine.

Westminster tube station was eerily empty on May 15 as the vast majority of commuters worked from home.

On May 10, five days before the photo, the prime minister addressed the nation from Downing Street and paid tribute to those who had “shown the common sense to overwhelmingly support these rules”.

He also described the “tragic” death toll and the “enormous suffering” the country had to endure.

A day after the park meeting, an anti-lockdown demonstration took place in London’s Hyde Park.

Pierce Corbyn was among 19 people arrested at the protest, where hundreds gathered carrying placards and placards with slogans such as “freedom over fear”.

Dozens of police officers, including some on horseback, were patrolling the protest and fined 10 more individuals for not complying with the lockdown restrictions.

Deputy Assistant Commissioner of the Metropolitan Police, Lawrence Taylor, said the protesters had clearly broken directions, putting themselves and others at risk of infection.

Those who stuck to government restrictions spoke of having to spend more than a year without human contact with their families.

Another Twitter user posted a picture of themselves in full PPE, remembering how they had to sleep in the garage to avoid putting their families at risk of contracting Covid.

They said: ‘This was me in May 2020, on an endless cycle of car door, work, car and door, ‘Don’t touch my dad’ until I change and take a shower.

After possible contamination, I slept in my garage to protect my family. Over a year later, I learned that the Conservatives were laughing at us all…#cheeseandwine’

May 2020 was also the height of virtual testing, with friends and families forced to socialize via Zoom due to restrictions preventing families from mixing.

The Belborough Labor consultant in Nottingham posted a picture of herself drinking with her friends at a distance after a ‘hard day’.

She said: ‘May 2020 photo. This is what social media looked like after a hard day for those of us who followed the rules last May.

“We’ve all had tough days in lockdown, no more than the key workers we applauded for, but no cheese and wine allowed for 17 people.” 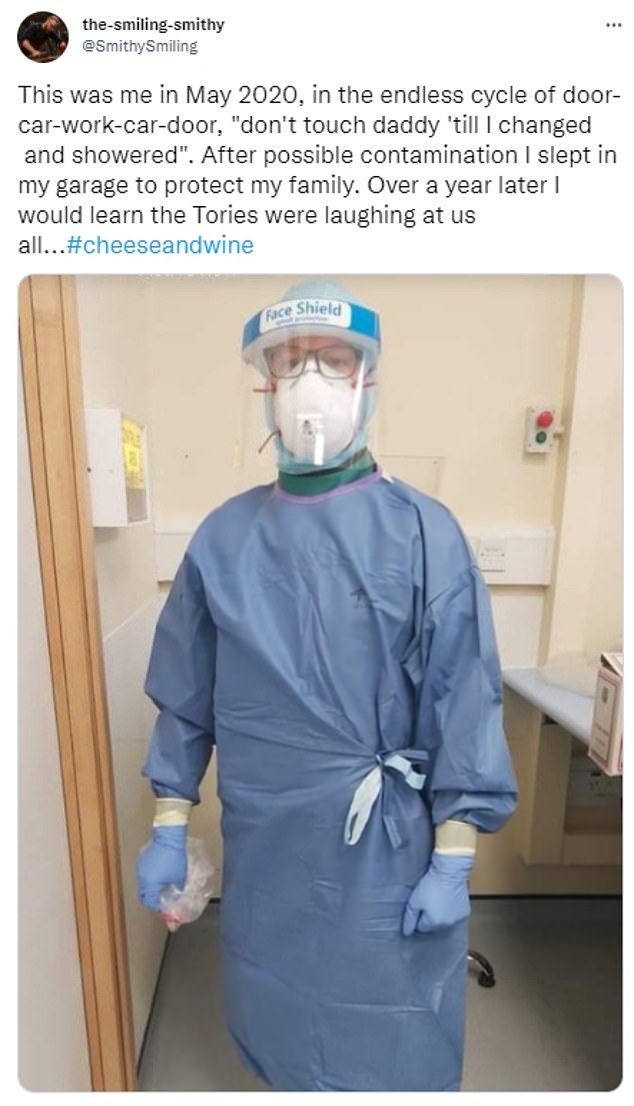 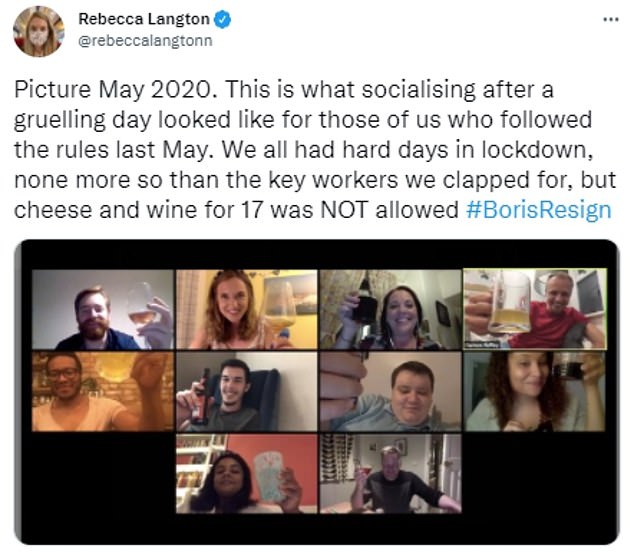 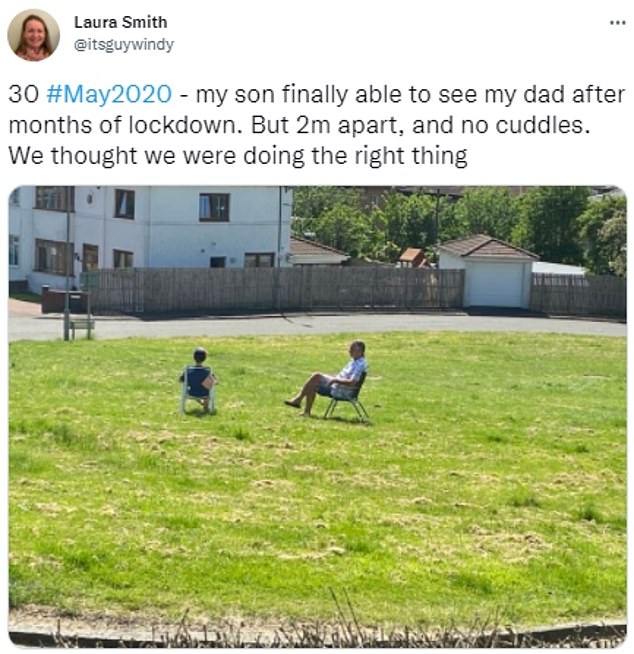 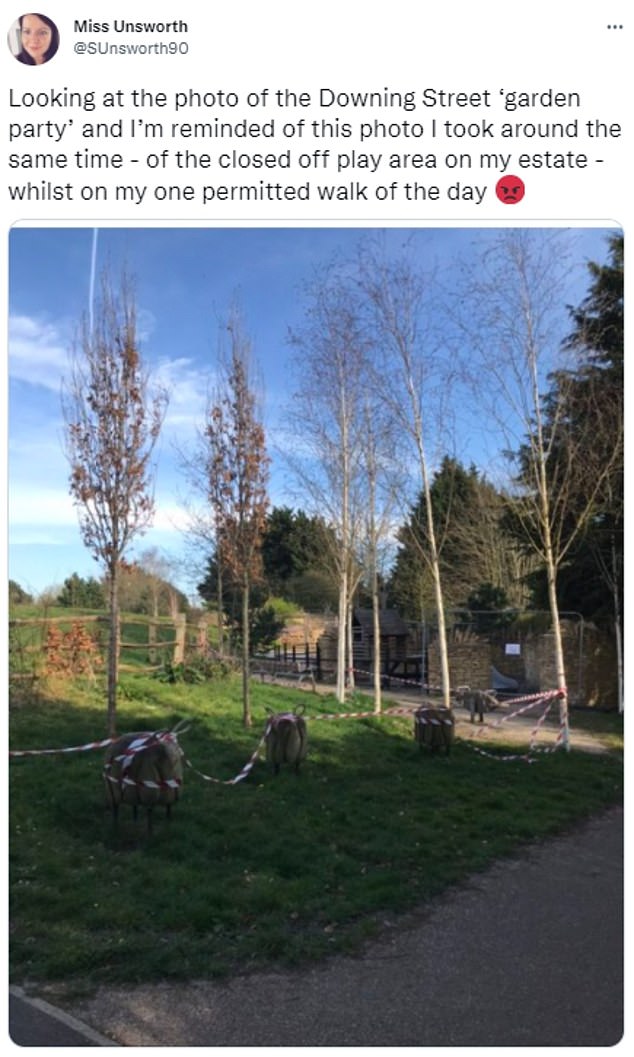 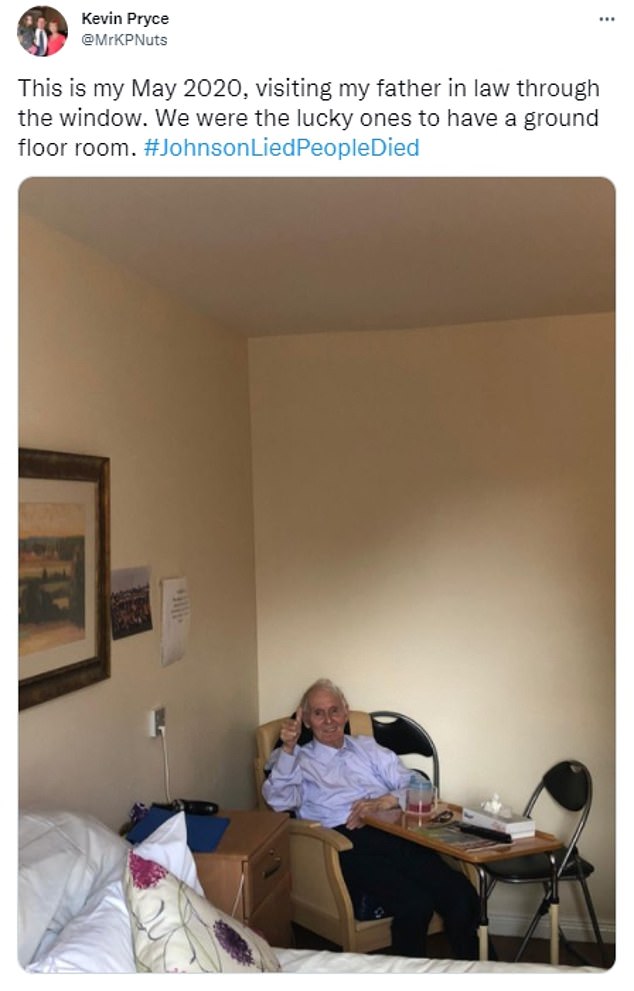 Laura Smith shared a photo of her son seeing his grandfather for the first time after ‘months of lockdown’, but added that the couple were two meters apart and they didn’t adopt, believing they were ‘doing the right thing’.

Similarly, Kevin Price shared a photo of his father-in-law visiting through a nursing home window, describing his relative’s luck living in a ground floor room.

Twitter posted the latest photo of an enclosed play area at her local home, where children cannot use basic equipment such as swings and slides during the lockdown.

The photo, obtained by The Guardian, raises serious questions about Downing Street’s repeated claims that a “business meeting” was being held at the time – rather than a social event involving wine, spirits and pizza at home and abroad.

“I really don’t think it qualifies as a party because Carrie showed up and spent some time there with her husband.”

All of them wear suits and most of them are in uniform.

The revelations have put more pressure on the prime minister accused of “bleeding public trust,” with 51 percent of Conservative voters in 2019 believing he was dishonest.

Labor deputy leader Angela Rayner said the photo was “a slap in the face for the British public”.

She added: ‘The prime minister is constantly showing us that he does not respect the rules he sets for the rest of us. Allegedly drinking and partying late into the evening [at No 10] When the rest of us only walked once a day.

These are the latest in a row over celebrations inside No 10, with Downing Street accused of holding four parties that violated Covid restrictions last year.