A bridge too far: Boris Johnson’s dream of crossing into Northern Ireland set to be shelved amid rumors it could cost £24 billion

Boris Johnson’s cherished dream of a bridge or tunnel from Scotland to Northern Ireland appears to be shelved.

The review scheduled for today concludes that it will be very expensive and very technically difficult.

The Prime Minister has asked Network Rail Chairman Sir Peter Hendy to launch a feasibility study and it is understood he has ruled out such a plan for the foreseeable future.

Sources say this was due to the technical challenge and huge expenditures – estimated at £24 billion. 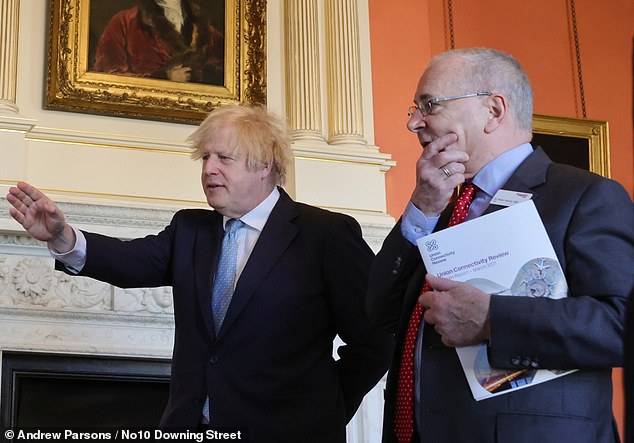 The Prime Minister has asked Network Rail Chairman Sir Peter Hendy to launch a feasibility study and it is understood that he has ruled out such a plan for the foreseeable future.

The idea of ​​a bridge or tunnel has been examined as part of a broader study called the Connecting Union Review, which looks at how to strengthen transport links between the four UK countries.

It is understood that the report will leave the door open for an established link connecting Scotland and Northern Ireland in the future.

It will also recommend a capacity boost on the West Coast Main Line from London to Glasgow, an upgrade of the A75, the route to the west coast of Scotland and ferry ports in Northern Ireland.

Improving the roads and railways between England and Wales will also be urged.

The Prime Minister said last night that he intends to accept a recommendation to create UKNET, a new body comprising representatives from the four countries which will define and outline how cross-border contacts can be strengthened.

Henri Murison of the Northern Powerhouse Partnership commented: “With the Boris Bridge back in Northern Ireland in the grain fund it came in, it is time to focus on infrastructure projects that have a strong economic case, such as a new line across the Pennines all. The road from Manchester to Leeds via Bradford.

Festive brainteaser will leave you scratching your head
15 mins ago