The USB-C standard is one of the most important connectivity standards today. Most of the leading technology companies have started to rely on it in their various devices. Especially since it supports various forms of connection. Following the announcement of the improved version of USB-C 2.1, the use of this standard is expected to increase significantly.

The USB-C 2.1 standard includes an update to both the ports used in the devices, on the one hand, and the connections, on the other. This standard is managed and developed by an organization known as USB-IF. And now the popular connectivity technology supports data transfer, device charging, as well as connecting devices to screens perfectly.

Perhaps one of the most important updates in the new version is to support a power of up to 240 watts after the maximum was 100 watts in the previous generation. This ability will be very useful for different types of devices. An example of this is gaming laptops.

This means that devices that require a large amount of power, such as laptops, will no longer need dedicated chargers and can be charged directly using a USB-C 2.1 connection and a charger supporting the same standard.

The new standard takes advantage of the overall USB PD 3.1 fast charging standard. In light of his arrival in the same way as usual. Finally, USB-IF has redesigned the logos used on the connectors and chargers to reflect their type.

Read also: 4 features you must have in a laptop when buying it 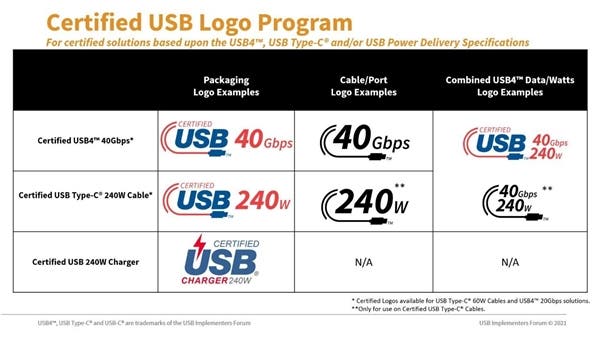 USB-C chargers and connectors are different. Usually, they all support fast charging. But certain models of them support displaying screen content or transferring files at high speed. That is why the company launched distinctive logos as pictured.

The new standard will also support data transfer at speeds of up to 40Gbps, which is a very high speed. Besides, the image displays the various logos that are used on the product cover, on the connector and on the port, respectively.

In addition, it revealed a logo dedicated to charging with a capacity of 240 watts, which is the clear logo at the bottom left of the image. In general, the USB-IF organization has issued more than one label that is difficult to understand, making it difficult to differentiate between the appropriate connectors and chargers.

This appears in the USB 3.1 generations, which are divided into Gen1 and Gen2, and the same problem was repeated in the next generation USB 3.2, which included versions with names that are more difficult to understand.

Read also: Everything you need to know about the upcoming USB4 standard

The Foundation plans to facilitate the naming in the new generation USB4. It will have only two versions, USB4 20 and USB4 40, which is undoubtedly a more accessible name.

And manufacturers will start relying on the new logos across all devices and products in general. This also makes it easy to choose the right connector and charger even for older versions. It is also expected that the new 240W charging capacity will be of great benefit in the near future.

Windows 11 reduces gaming performance by default on some devices