Actress and standup comic Amy Schumer said taking the abortion pill is on par with getting liposuction in an Instagram post in which she told her followers ‘do whatever you want to feel great about yourself.’

Schumer, 40, posted the message a day after the FDA permanently allowed abortion pills to be sent by mail on Thursday after regulators lifted the in-person requirement to obtain them.

The star of Trainwreck and I Feel Pretty, who had her first child in 2019, weighed in with her recommendation for the abortion bill as several states have asked the Supreme Court to chip away at the landmark Row v Wade decision that legalized abortions.

‘Mifepristone is what the abortion pill is called. Also I got lipo around my C-section after my hysterectomy, decided to treat myself to a highly recommended guy name Dr. Jordan Terner,’ Schumer posted to her Instagram account on Friday.

‘Do whatever you want to feel great about yourself safely. Always trying to keep it 100 percent, also read the book caste!’ she added, while tagging the best-selling book about racism in the US and Carafem, a non-profit organization that provides women’s reproductive health services.

The post has already garnered 23,000 likes as of Saturday, as the Supreme Court is poised to undo its abortion rights precedent. 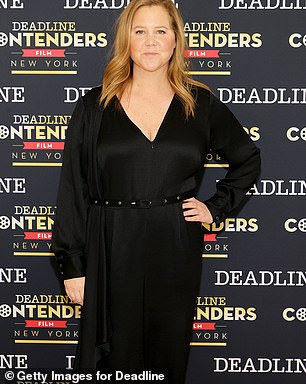 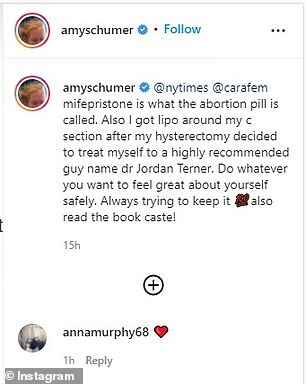 Amy Schumer, pictured left, and Schumer’s Instagram post, pictured right, where she likened the abortion pill to getting liposuction 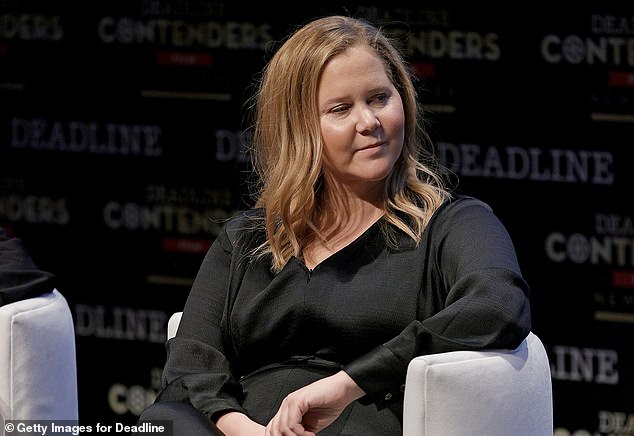 Schumer’s post came the day after the FDA permanently allowed abortion pills to be sent by mail on Thursday, after regulators lifted the in-person requirement to obtain them 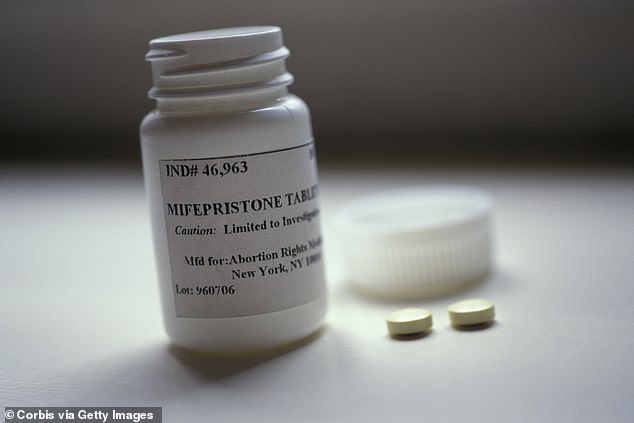 Pictured: Mifepristone, the abortion pill Schumer’s post mentions, will now be made available via mail order following an FDA ruling on Thursday

Several fans defended Schumer’s hot take in the wake of abortion pills and birth control pills being made available by mail.

‘Legit, can someone just get some to have on hand in case Roe v. Wade gets overturned..?’

‘And GOP states have already banned receiving it by mail. They are always one step ahead in their March to be behind,’

Meanwhile, other commenters questioned Schumer’s support of mail-order abortion pills and her lighthearted take on the matter.

‘That’s great and all but it’s a little concerning about being able to get it in the mail as an abusive couple could easily access it to force an abortion on their spouse this way,’ 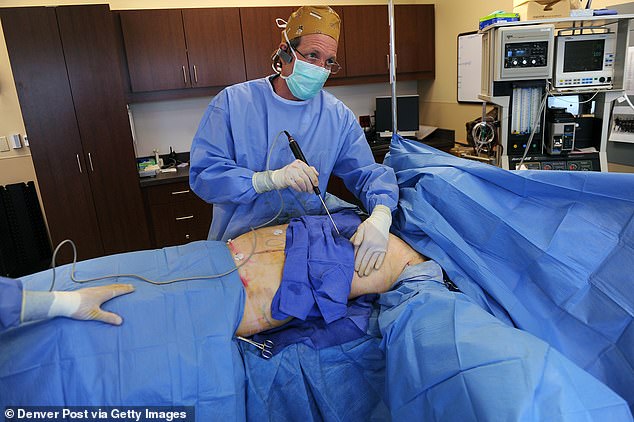 Schumer likened the abortion pill to liposuction, an operation of which pictured above 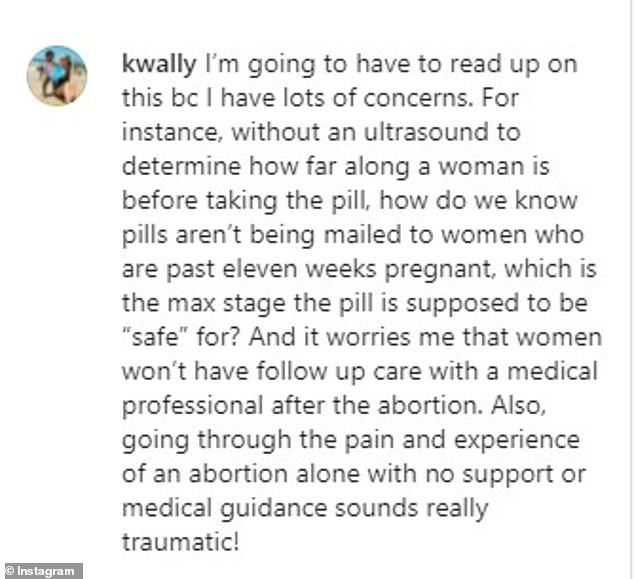 ‘Maybe have a better way of having access to it then the mail.’

‘I’m going to have to read up on this because I have lots of concerns,’ wrote Kate Knochel Wallace.

‘For instance, without an ultrasound to determine how far along a woman is before taking the pill, how do we know pills aren’t being mailed to women who are past eleven weeks pregnant, which is the max stage the pill is supposed to be “safe” for?’

‘And it worries me that women won’t have follow up care with a medical professional after the abortion. Also, going through the pain and experience of an abortion alone with no support or medical guidance sounds really traumatic!’

The Biden administration has recently looked to relax federal restrictions amidst the fallout from a potential Roe v. Wade reversal, of which there was historic arguments made against the court’s 1973 decision that legalized abortion in the US earlier this month. 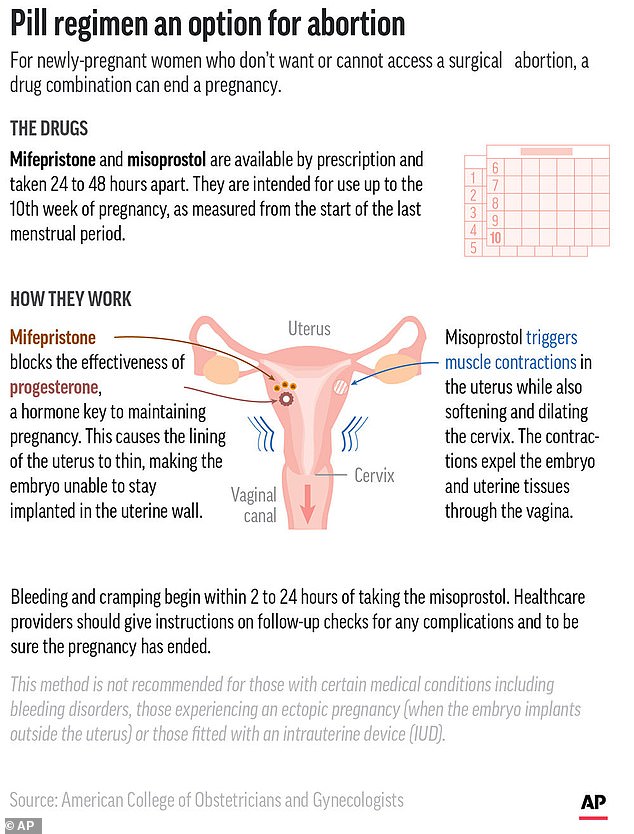 Pictured: how the chemical combination of mifepristone and misoprostal act to end a pregnancy

The arguments came during Dobbs v. Jackson Women’s Health Organization, a Mississippi case that argued in favor for state’s abortion rights over a single federal one.

However, red states across the country are already working to counteract what the federal government has decided to do.

‘The FDA’s decision eliminating its unnecessary in-person requirement did not come a moment too soon,’ ACLU attorney Julia Kaye said in a statement following the FDA’s decision.

Meanwhile in Texas, the Supreme Court on Thursday returned a case over the state’s six-week abortion ban back to a federal court that twice upheld it, in the latest setback for pro-choice activists.

Justices rejected abortion providers and pro-choice advocates’ wish to have the case sent to US District Judge Robert Pitman in western Texas, who previously blocked the ban, before handing it back to the US Court of Appeals for the 5th Circuit.

The decision was signed off on by Donald Trump-appointed Justice Neil Gorsuch.