Dr. Mehmet Oz came on stage at Donald Trump’s Pennsylvania rally guns blazing to tell supporters that lawmakers need to use their ‘fists metaphorically’ instead of index cards in the culture war against Democrats.

Hundreds of rally-goers braved persistent rain, chilly conditions and inches of mud to hear from Donald Trump in a southeast suburb of Pittsburgh, Pennsylvania on Friday evening.

But several made it clear that they are not at the rally to support Dr. Oz.

Oz kept his remarks quick and focused on pro-MAGA topics, such as lauding Fox News personality Sean Hannity and bashing big pharma and Democrats for wanting people to be ‘sheeple.’

‘The shocking reality is the Green New Deal – it’s a lie, it’s not real, it can’t be done the way they say it. I’m telling you as a scientist. But as a leader, I’m also going to be clear, we’re going to push back on that,’ he said, taking aim at the progressive energy and environmental proposal.

‘Republicans have been fighting,’ he continued, ‘you know, walking into this culture war knife fights with index cards.’

‘Index cards don’t work there, you’ve got to go in there with your fists sometimes – metaphorically,’ Oz said. 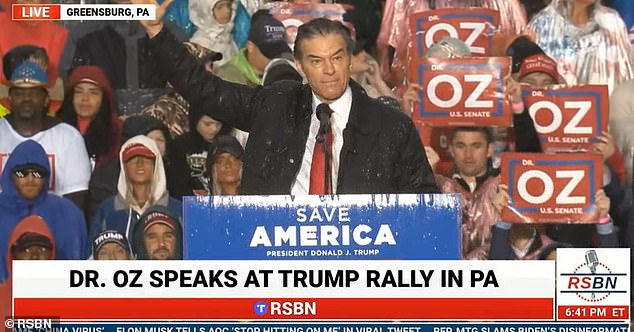 Dr. Mehmet Oz told rally goers in Greensburg, Pennsylvania on Friday evening that Republicans are ‘walking into this culture war knife fights with index cards. Index cards don’t work there, you’ve got to go in there with your fists sometimes – metaphorically’ 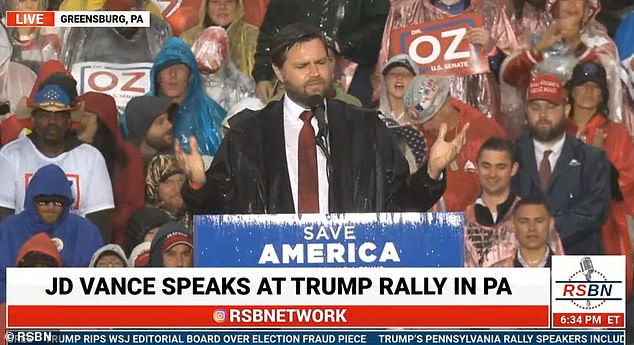 Trump supporters thought Oz wouldn’t even get to finish his remarks due to negative perceptions.

‘Dr. Oz is gonna get booed out of here,’ 53-year-old Amy told DailyMail.com at the rally on Friday, saying that she was at the fairgrounds since 8:00 a.m. ‘I’m in a truther group and they’re all saying that. He’s not from the state, that’s my thing.’

Voters in Ohio were also hesitant about Trump’s endorsement of Vance, who just won his Republican primary bid for Senate with the backing of the former president.

Some at the rally told DailyMail.com that they didn’t even know who Oz was, while others said that they were planning to protest the former television personality out of the fairgrounds.

‘I honestly don’t know anything about him,’ 24-year-old Trump supporter Nick said at the rally on Friday. ‘Heard he doesn’t even live here.’

Oz registered to vote at his in-laws home in Pennsylvania in 2020, but is not a native of the state – further leading to criticism that he does not belong in the U.S. Senate on behalf of the Keystone State.

‘We’ll see what else he comes out with. Trump’s support put him on the radar, but I’m not sold,’ she added.

One person wearing an orange rain jacket had letter stuck onto the back of his outfit with a message: ‘No Oz.’ 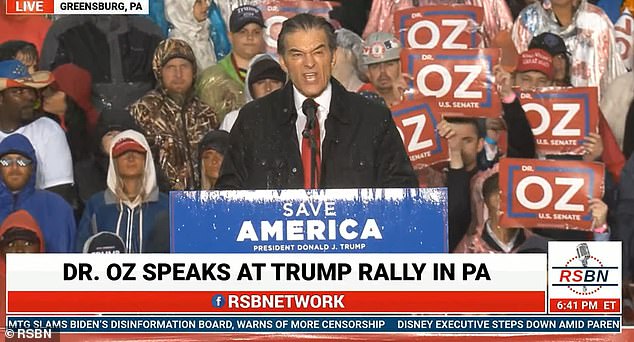 Oz took stage to some cheers, some boos, but an overall tepid response amid torrential downpours in western Pennsylvania on Friday evening

While Oz did get some protests and some cheers during his remarks ahead of Trumps’ arrival, the response was mostly tepid.

‘I benefited in my race from the endorsement of Donald Trump,’ Vance said during remarks Friday, teeing up Oz and hoping to calm skeptical voters at the rally.

‘We need to support America first candidates,’ he insisted.

The former president, who will take the stage at 8:00 p.m., is hoping to encourage voters in the swing state to turn out for Pennsylvania Senate candidate Dr. Oz despite a less than warm welcome for the former television personality.

While the Keystone State’s primary election is less than two weeks away on May 17, there is still no clear frontrunner in the Republican contest for Senate.

A subdued and smaller-than-usual crowd descended on an extremely muddy and wet fairgrounds in Greensburg, Pennsylvania, braving the torrential downpours in order to get a glimpse of the former president.

Although Oz is Trump’s pick in Pennsylvania, voters are less convinced.

A poll from Franklin & Marshall College taken in late April shows that of registered Republican voters, only 18 percent back Oz – even after garnering Trump’s coveted endorsement.

David McCormcik is trailing Dr. Oz by 2 percent, which is within the margin of error, at 16 percent support to be the GOP candidate for the Senate seat being vacated by Republican Senator Pat Toomey. 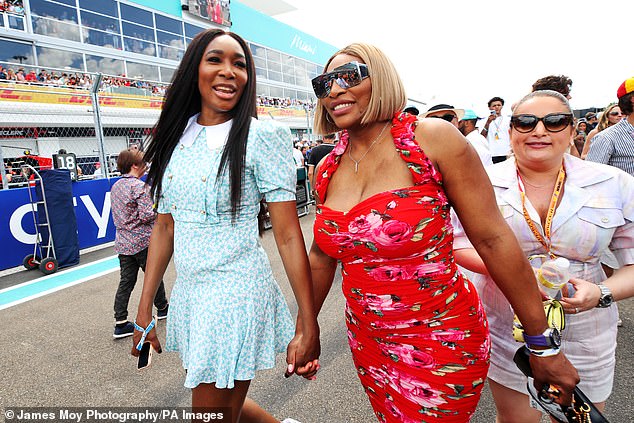 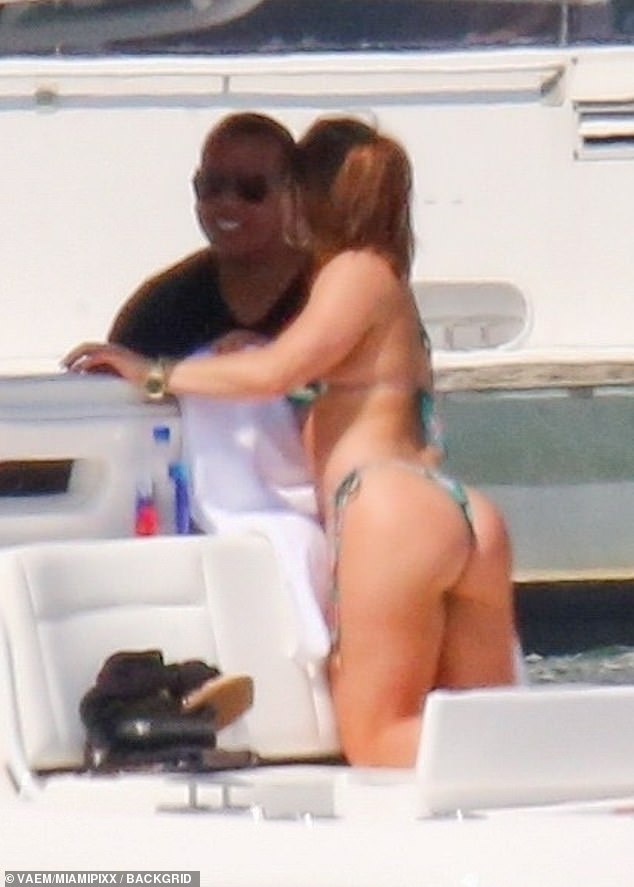 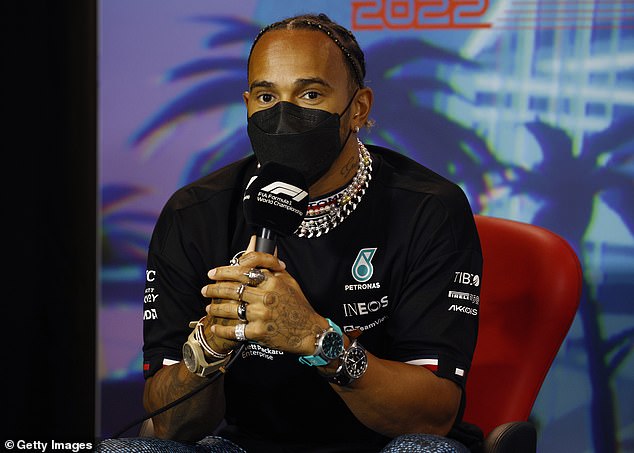 Will F1’s ban on bling drive out Lewis Hamilton after he complained of being singled out? 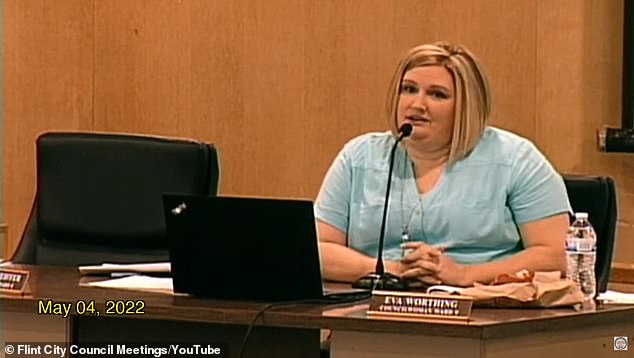 Will F1’s ban on bling drive out Lewis Hamilton after he complained of being singled out?
25 mins ago

Will F1’s ban on bling drive out Lewis Hamilton after he complained of being singled out?