The Trump Organization and the Presidential Inaugural Committee will pay a combined $750,000 to Washington, DC to settle a lawsuit over allegations that the former president’s inaugural committee misspend funds to enrich his real estate empire, the capital’s attorney general announced on Tuesday.

Donald Trump panned Racine’s investigation as a ‘witch hunt’ and implored the Democratic official to focus on ‘soaring’ crime rates in his city instead.

The agreement, which has yet to be signed by the presiding judge, would see the sum split between two DC-area nonprofits benefitting the city’s youth, according to a copy of the document shared by Attorney General Karl Racine.

The ex-president himself was not named as a defendant in the suit, which targets Presidential Inaugural Committee, the Trump Organization and the Trump International Hotel in DC.

Trump claimed he only settled due to the ‘impending sale’ of his Washington, DC hotel.

The hotel, which opened just before Trump won the White House in 2016, was approved to be sold to a Miami-based investment fund earlier this year.

‘Given the impending sale of The Trump International Hotel, Washington D.C., and with absolutely no admission of liability or guilt, we have reached a settlement to end all litigation with Democrat Attorney General Racine,’ Trump said in a statement through his family business. 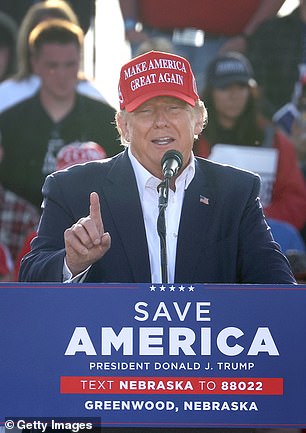 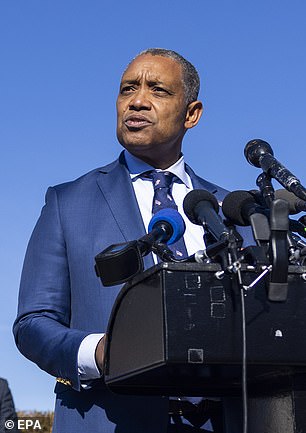 Donald Trump, who is not named a defendant in the lawsuit, denounced DC Attorney General Karl Racine’s (right) probe as a ‘witch hunt’

‘As crime rates are soaring in our Nation’s Capital, it is necessary that the Attorney General focus on those issues rather than a further leg of the greatest Witch-Hunt in political history.’

He continued, ‘This was yet another example of weaponizing Law Enforcement against the Republican Party and, in particular, the former President of the United States. So bad for our Country!’

The president praised himself for creating a ‘landmark’ out of ‘nothing’ — despite the building’s place on the National Register of Historic Places as the Old Post Office and Clock Tower.

‘It was my great honor to have built this truly great hotel out of a structure that had laid dormant for thirty years, creating jobs and so many other benefits for the people of D.C., and indeed, our Country itself,’ Trump said.

‘A true landmark has been created out of nothing!’

The legal settlement is not ‘an admission of wrongdoing, unlawful conduct, or liability’ on the part of the Trump Organization or Trump’s inaugural committee, the court filing states.

Racine boasted on Twitter Tuesday, ‘We clawed back $750,000 from the Trump Organization to give to local nonprofits educating youth about democracy and civics.’

‘We’re resolving our lawsuit and sending the message that if you violate DC nonprofit law—no matter how powerful you are—you’ll pay.’ 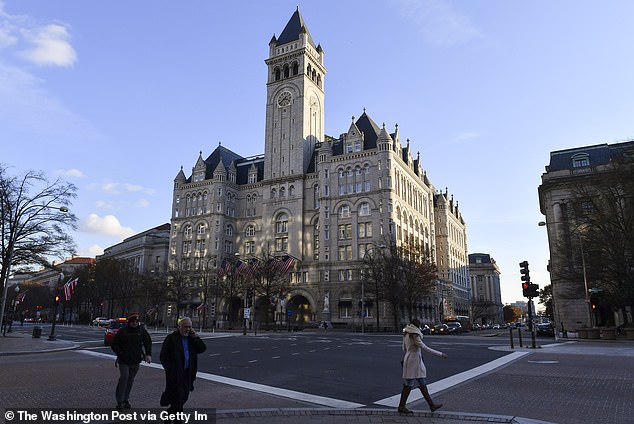 In his own statement on the settlement, Trump said he made his DC hotel into a ‘landmark’ despite the building previously being listed on the National Register of Historic Places

Racine praised the deal struck by his office and the Trump Organization as a ‘successful resolution’ in his efforts ‘to recover misspent nonprofit funds and ill-gotten gains.’

‘With today’s successful resolution, we’re returning the money to DC,’ he said, which the court filing shows will be two separate $350,000 checks to the Mikva Challenge Grant Foundation and DC Action for Children Today.

‘In the District, we’re committed to ensuring that corruption comes at a cost. That should be clear to everyone, including future presidents,’ the attorney general said.

In 2020, Racine accused the inaugural committee of conspiring with Trump’s family to ‘grossly overpay’ for event space at the former president’s DC hotel around the time of Trump’s inauguration in January 2017.

Trump’s opening of a hotel just before entering the White House was heavily criticized by ethics watchdogs throughout his presidency. The hotel saw steady business from diplomats and lobbyists staying there to curry favor with the former commander-in-chief.

Trump’s portion of the $750,000 settlement is not the only legal woe drilling a hole in his pocket. 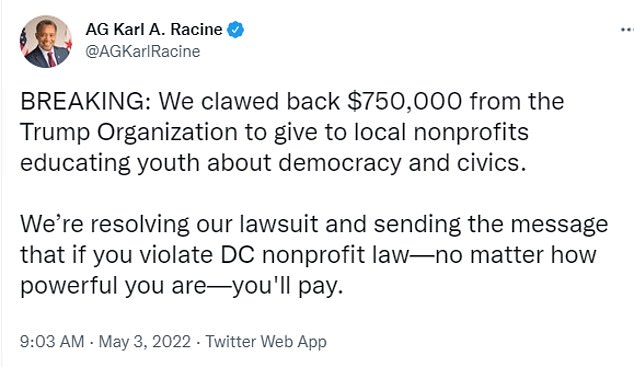 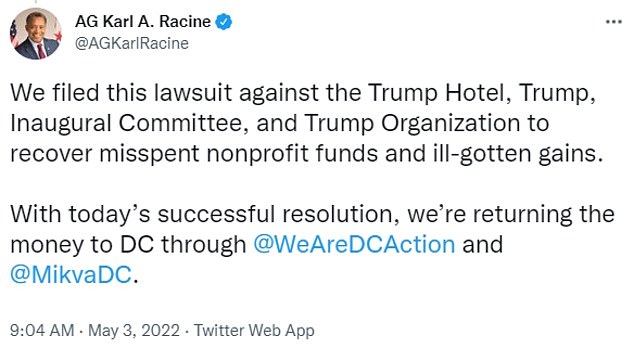 Racine announced the settlement, and the details of where the money will go, on Twitter

Last month, a justice on the New York state Supreme Court approved a request from state Attorney General Letitia James to hold Trump in contempt and fine him $10,000 for every day he does not cooperate with her subpoena.

James’ office is investigating Trump’s family business over accusations that the company and its executives — mainly the ex-president and his children — presented misleading financial statements to win favorable loan terms and other deals.

She alleges that the practice has gone on for at least a decade.

At the heart of James’ subpoena are eight financial documents which she claims Trump is keeping or otherwise failed to turn over to her team.

The former president and his lawyer claim he simply does not have the pages New York is requesting — an excuse that Judge Arthur Engoron did not buy.

Trump’s lawyer Alina Habba said in a Monday filing that he ‘performed a diligent, thorough and comprehensive search for all of the documents and items called for in the subpoena and provided complete and accurate responses.’ 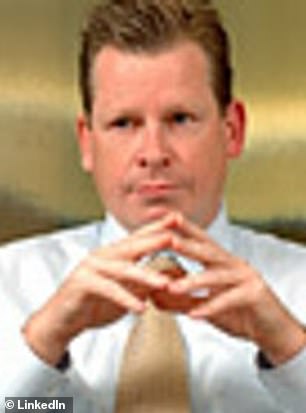