Randy Weaver, patriarch of a family that was involved in an 11-day Idaho standoff with federal agents 30 years ago that left three people dead and inspired the modern anti-government militia movement, has died at the age of 74.

His death on Wednesday was announced on in a Facebook post by daughter Sara Weaver, who lives near Kalispell, Montana and wrote ‘Love you always Dad’ on a post sharing a photo of him, along with the dates January 3, 1948, and May 11, 2022.

Randy Weaver’s standoff with federal agents in the mountains near Ruby Ridge in the Idaho Panhandle transfixed the nation in August 1992. 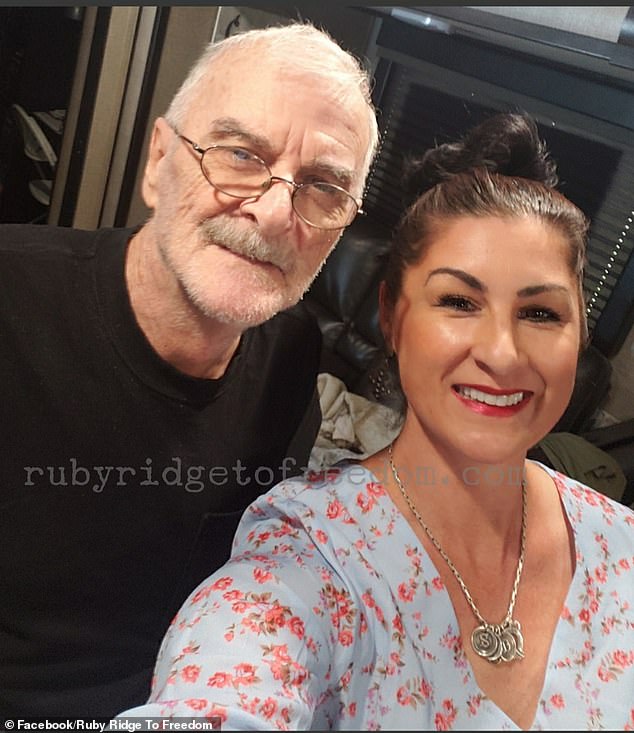 Fina photo: Ruby Ridge patriarch Randy Weaver, seen with his daughter Sara, died this week at the age of 74. His 11-day standoff with federal agents gripped the nation in 1992 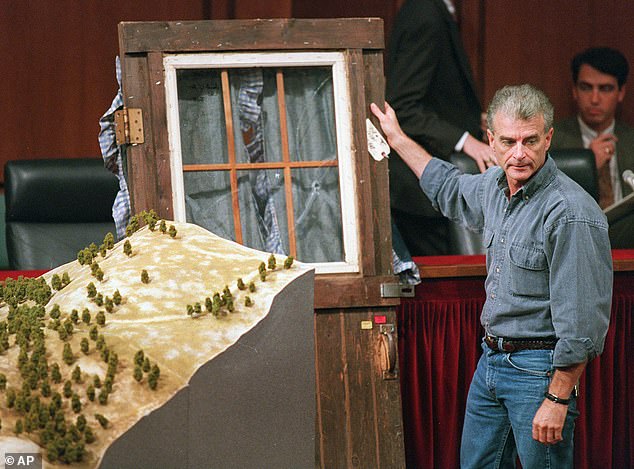 Randy Weaver holds the door of his cabin showing holes from bullets fired during the siege of his Ruby Ridge, Idaho, home, model at left, during testimony before the Senate in 1995 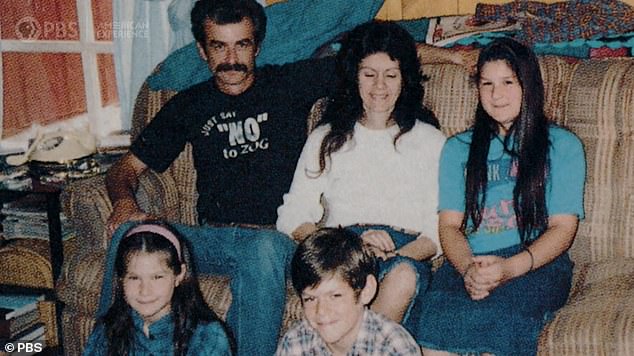 Randy Weaver is seen with wife Vicki and three of their children, including son Samuel who was killed in the 1992 Ruby Ridge siege 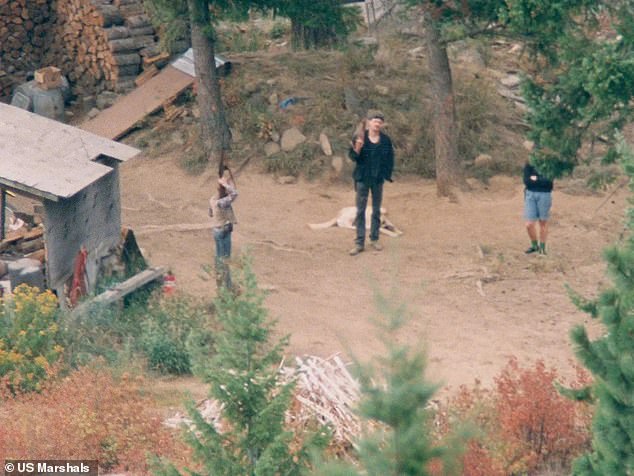 Weaver had moved his family to northern Idaho in the 1980s to escape what he saw as a corrupt world, saying he believed in separation of races.

When he failed to appear in court on the gun charge, a judge issued a bench warrant for his arrest. To avoid arrest, Weaver holed up on his land near Naples, Idaho.

On August 21, 1992, a team of U.S. marshals scouting the forest to find suitable places to ambush and arrest Weaver came across his friend, Kevin Harris, and Weaver’s 14-year-old son Samuel in the woods. A gunfight broke out.

Samuel Weaver and Deputy U.S. Marshal William Degan were killed in the shootout.

Harris returned Samuel’s body to the Weaver compound, and federal agents began laying plans to surround and storm the homestead, drafting special rules of engagement that lowered the bar for lethal force. 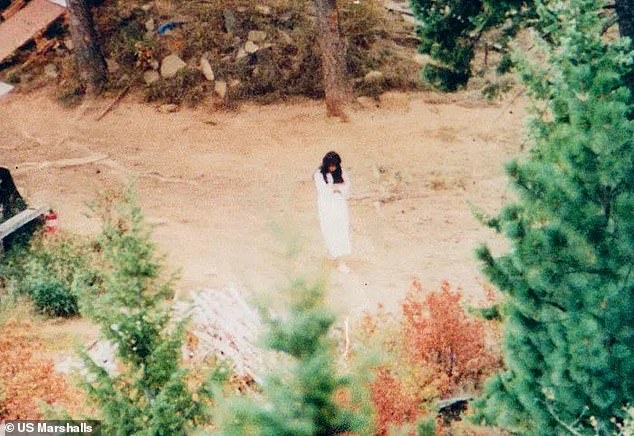 Vicki Weaver is seen in surveillance footage from the siege, shortly before her death 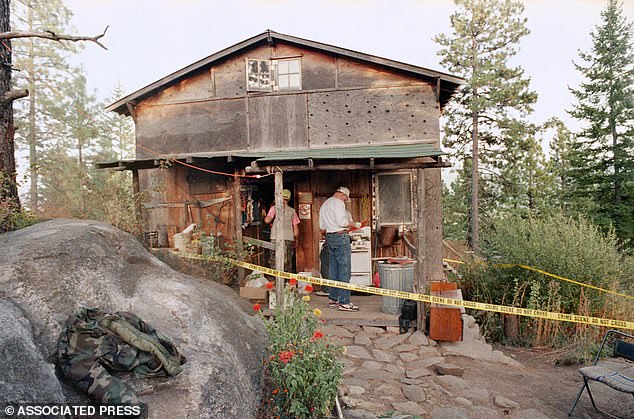 Federal agents gather evidence from the home of Randy Weaver near Naples, Idaho on August 31, 1992. Weaver’s wife Vicki was killed as she stood behind the front door 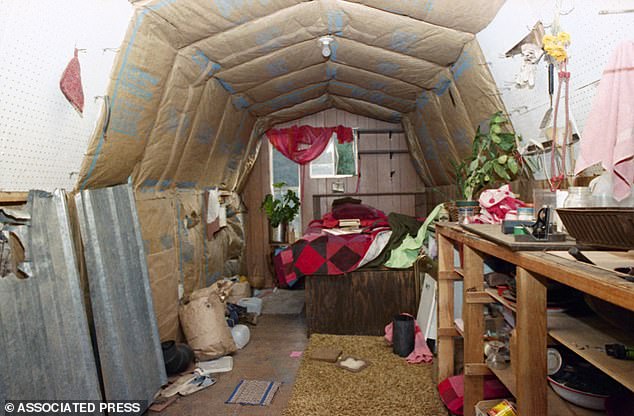 Interior view of the out building where the body of Samuel Weaver, son of fugitive Randy Weaver, was found after an 11-day standoff with federal agents 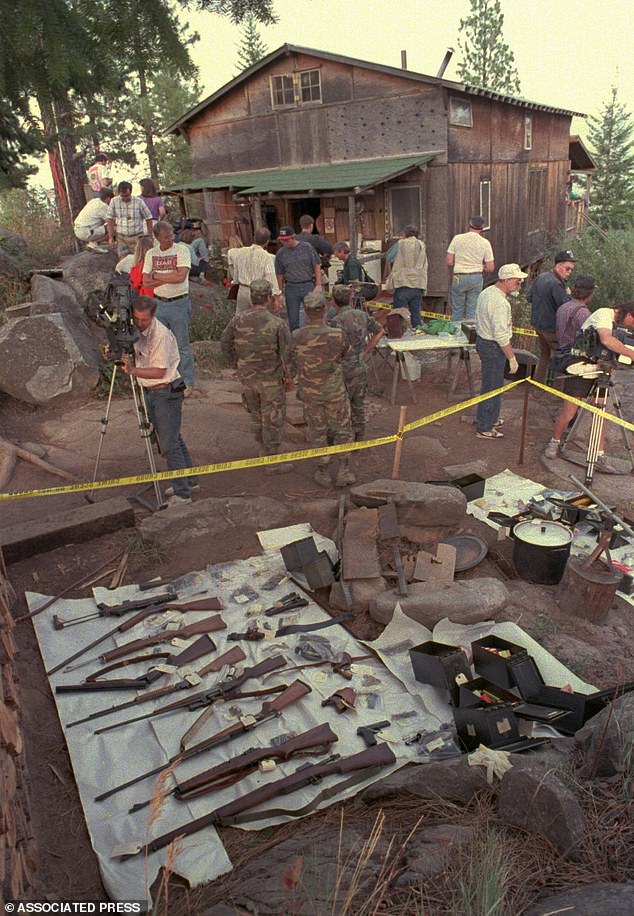 Media members and federal agents tour the outside of Randy Weaver’s home in 1992. Confiscated guns and ammunition are displayed on the ground following the end of the siege

The next day, an FBI sniper shot Randy Weaver. As Weaver, Harris and Sara ran back toward the house, the sniper fired a second bullet, which passed through Vicki Weaver’s head as she held an infant, killing her instantly and wounding Harris in the chest.

During the siege, Sara Weaver crawled around her mother’s blanket-covered body to get food and water for the survivors until the family surrendered on August 31, 1992.

Harris and Randy Weaver were arrested, and Weaver´s three daughters went to live with their mother´s family in Iowa.

The surviving members of the Weaver family filed a wrongful death lawsuit. The federal government awarded Randy Weaver a $100,000 settlement and his three daughters $1 million each in 1995. 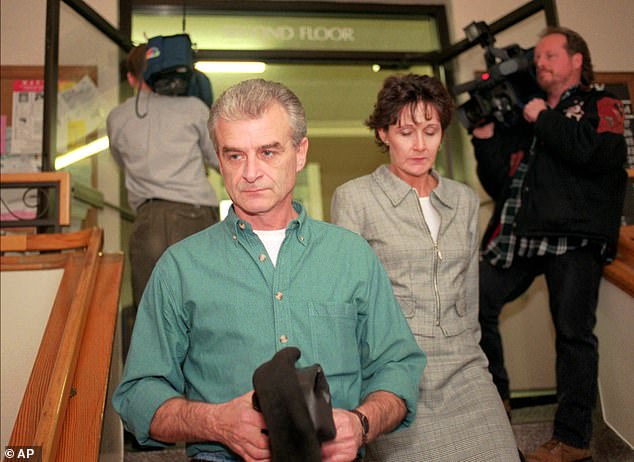 Randy Weaver leaves the Boundary County courthouse in Bonners Ferry, Idaho, with his friend, Linda Thompson, in 1997. Weaver has died at the age of 74 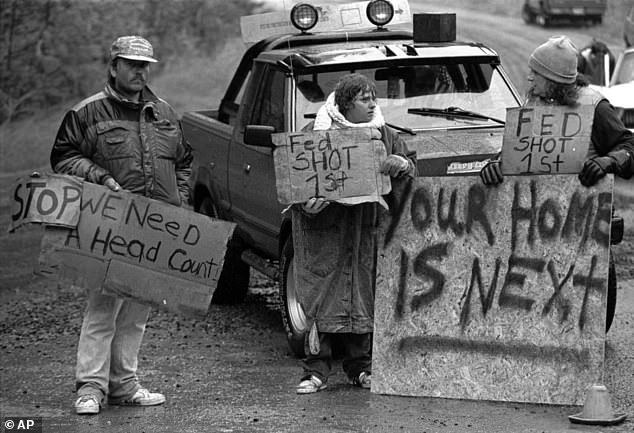 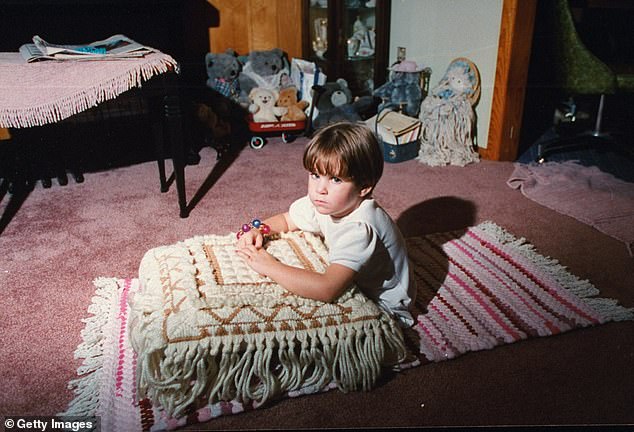 Elisheba Weaver was 10 months old when her mother was shot dead by federal agents as she held the baby in her arms. Elishaba is seen above three years after the siege 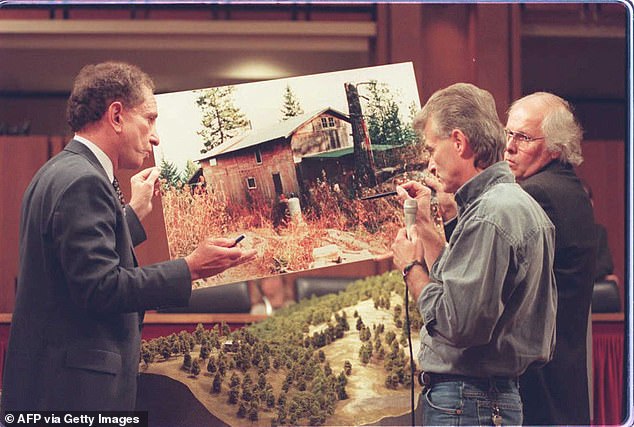 Weaver testified about his own racial beliefs at a Senate hearing in 1995, saying: ‘I’m not a hateful racist as most people understand it. But I believe in the separation of races.’

‘We wanted to be separated from the rest of the world, to live in a remote area, to give our children a good place to grow up,’ he added.

‘Ruby Ridge was the opening shot of a new era of anti-government hatred not seen since the Civil War,’ said Mark Potok of the Southern Poverty Law Center in a 2012 interview on the 20th anniversary of the siege.

After Ruby Ridge, federal agents laid siege to the Branch Davidian compound in Waco, Texas. It ended violently after 51 days on April 19, 1993, when a fire destroyed the compound after an assault was launched, killing 76 people.

Timothy McVeigh cited both Ruby Ridge and Waco as motivators when he bombed the federal building in Oklahoma City in 1995. Ruby Ridge has been cited often by militia and patriot groups since. 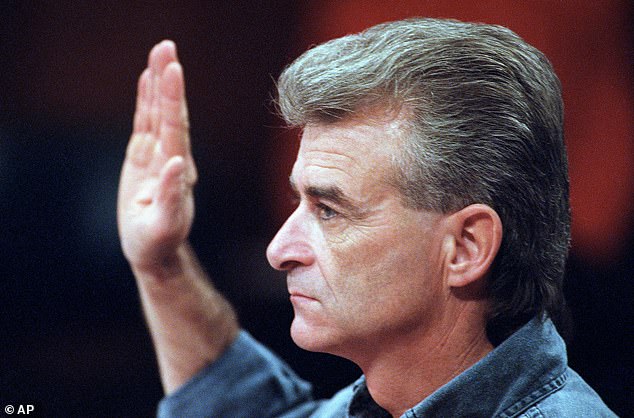 Weaver testified about his own racial beliefs at a Senate hearing in 1995, saying: ‘I’m not a hateful racist as most people understand it. But I believe in the separation of races.’ 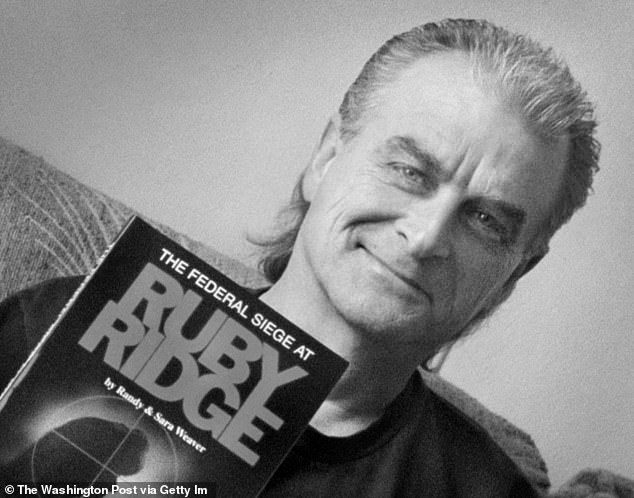 Weaver was often seen selling his book, ‘The Federal Siege at Ruby Ridge,’ at gun shows and survivalist expos 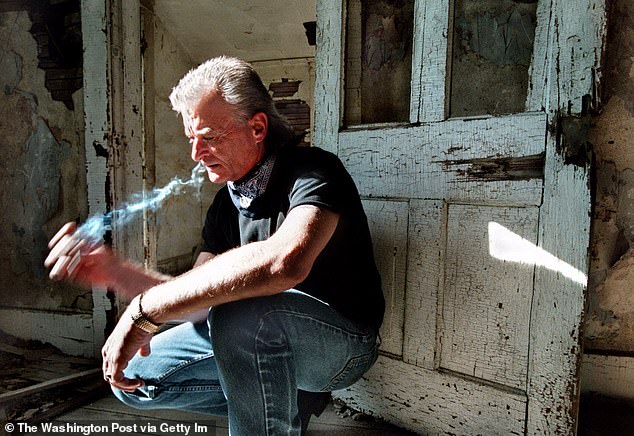 In the 30 years since the standoff, Ruby Ridge remained a rallying cry for anti-government extremists.

The Spokesman-Review reported Weaver remained popular among white supremacists and extremists in the years following the standoff, and was often seen selling his book, ‘The Federal Siege at Ruby Ridge,’ at gun shows and survivalist expos.

His daughter Sara Weaver lives near Kalispell, Montana, a city in the northwestern part of the state that is the gateway to Glacier National Park and more than 100 miles east of Ruby Ridge.

Sara Weaver said she is devastated each time someone commits a violent act in the name of Ruby Ridge.

‘It killed me inside,’ she told The Associated Press in 2012, regarding the Oklahoma City bombing. ‘I knew what it was like to lose a family member in violence. I wouldn´t wish that on anyone.’

After graduating from high school in Iowa, Sara Weaver moved to the Kalispell area in 1996. Her sisters and father followed shortly after.

She has been back to Ruby Ridge, to the land her family still owns. All that remains of the family’s modest home there is the foundation, she said. 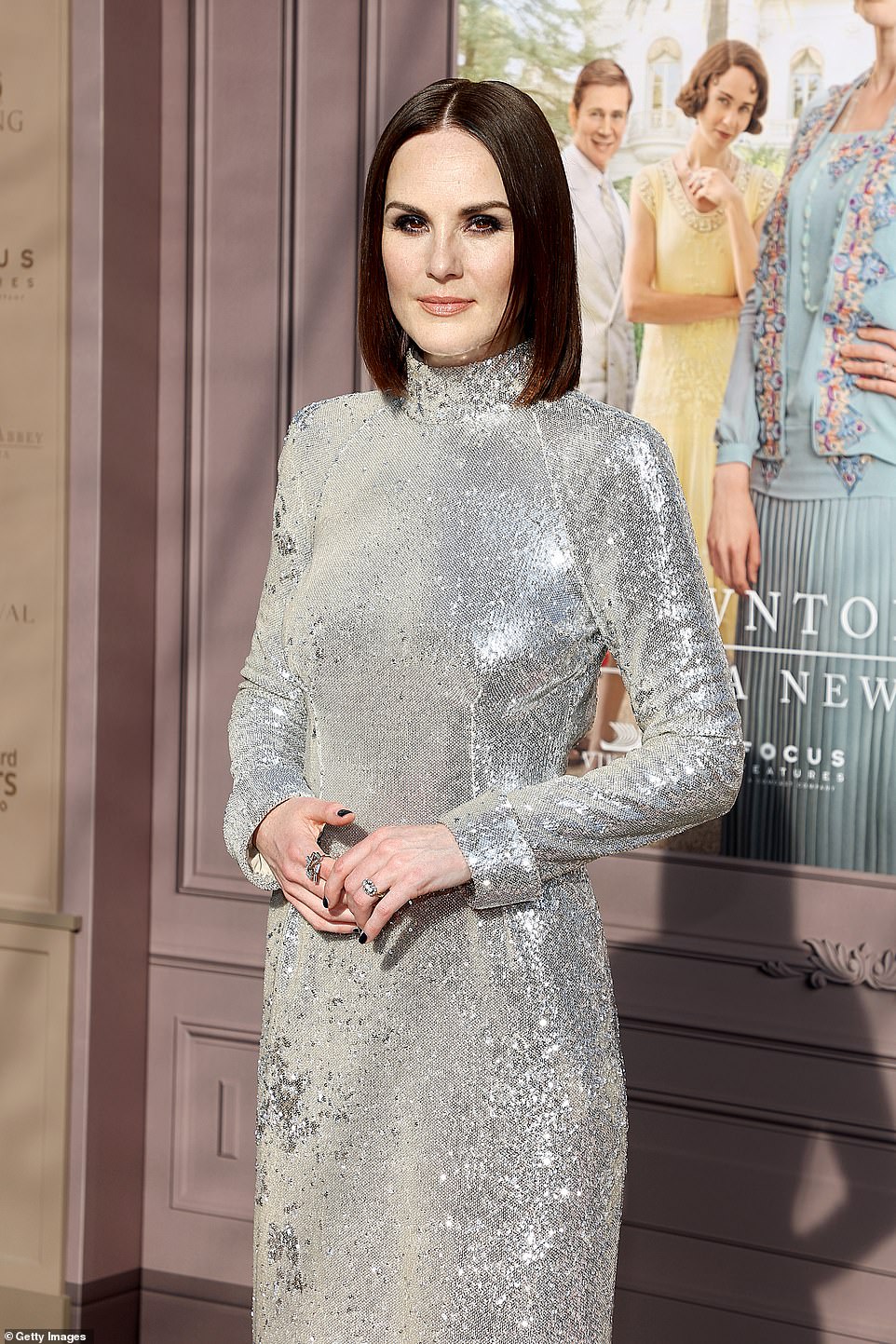 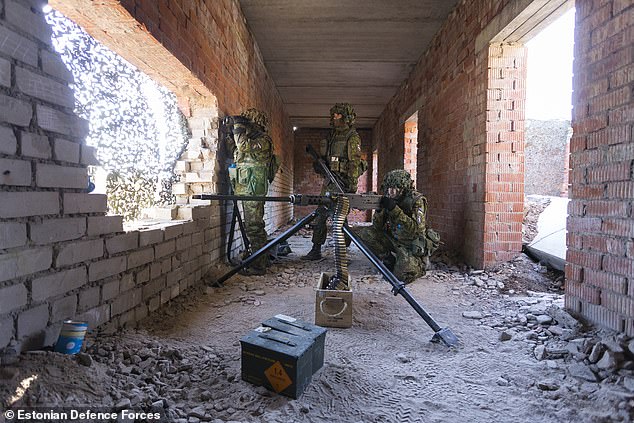 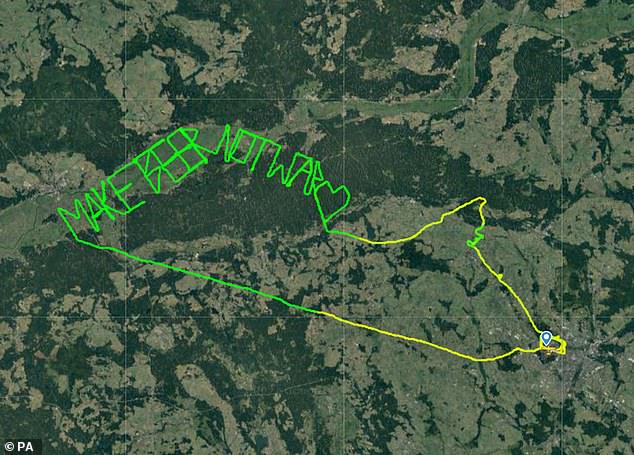 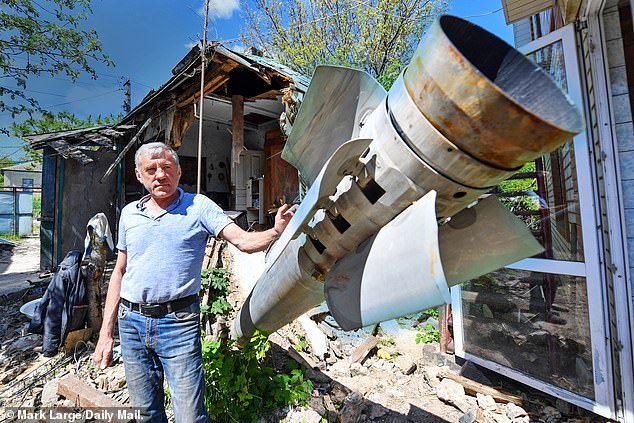 Featured Posts
The stars arrive for the Downton Abbey: A New Era premiere in New York
32 mins ago