Congressional Democrats argue Roe v. Wade will galvanize their voters ahead of the midterms as lawmakers see the issue as a boost for their candidates in the election that will decide control of Congress.

‘Today, we start the march towards the November elections,’ said Democratic Rep. Judy Chu of California on Wednesday.

She sponsored The Women’s Health Protection Act that has already passed the House and will be voted on in the Senate on Wednesday, where it’s expected to fail.

‘Today is the start of the galvanization of all women in this country and the men who support them,’ she said. ‘We will march to the polls this November to protect the rights of every person in every state for their right to an abortion.’

Democrats hope their effort to codify abortion rights will boost their candidates in the midterm election, where Republicans were expected to take control of the House of Representatives.

‘Already candidates are being asked about their abortion stance. I’ve seen a total change in the way the elections are being processed even as of this last week,’ Chu said.

‘It’s changed the landscape totally,’ she added. ‘And I expect more of these kinds of decisions and changes to go on moving forward. Every candidate now is having to decide how they will answer the question of choice and it’s going to be very very interesting.’ 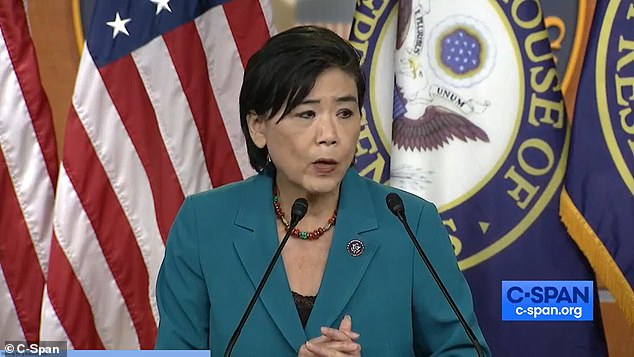 Congressional Democrats argue Roe v. Wade will galvanize their voters ahead of the midterm election: ‘Today, we start the march towards the November elections,’ said Democratic Rep. Judy Chu of California

But Majority Leader Chuck Schumer doesn’t have the votes to overcome a Republican filibuster in the Senate. Democratic Sen. Joe Manchin said on Wednesday he will not support the bill, saying it’s too broad of an expansion.

They will use the vote to argue to voters that the only way to protect reproductive rights from extreme Republicans is elect more Democrats.

‘This is a cruel, repressive, dangerous vision for our country, but it is precisely the future that MAGA Republicans are working towards,’ Schumer said on the Senate floor on Wednesday.

‘It is precisely the outcome that extreme Republicans have planned for.’

Republicans counter abortion should be decided by the states and say the Democratic bill is too extreme.

Wednesday’s vote is not expected to be the last in what Democrats’ see is a winning issue.

‘I would love to see us vote on every sub-issue that we can because I think there are many people that have an agenda that doesn’t fit not just with Democrat or Republican, it doesn’t fit with America,’ said Democratic Sen. Cory Booker of New Jersey.

He argued Democrats should hold votes on issues such as whether there should be excepts for rape or incest and other issues.

‘You should make them vote on that to see where folks stand so they know where people’s positions are and they informed as an electorate,’ he said.

His comments come as a new Morning Consult/Politico poll shows that 58% believe it is ‘very important’ or ‘somewhat important’ to vote for a candidate this fall that supports abortion rights.

More than half the respondents in the poll – 53% – want to keep Roe v. Wade, the landmark 1973 case that made abortion legal, the law of the land.

Democratic Rep. Diana DeGette of Colorado said on Wednesday that the pro-choice majority in the House needs to be maintained as a ‘backstop’ against those who want to take away abortion rights.

‘We have a pro choice majority and we need to keep it that way because we need to have a backstop against the extreme legislative efforts,’ she said.

‘People have assumed for almost 50 years now that they could make their health care decisions. They now know that the radical Supreme Court and the Republican majority has no intention to let that happen.’ 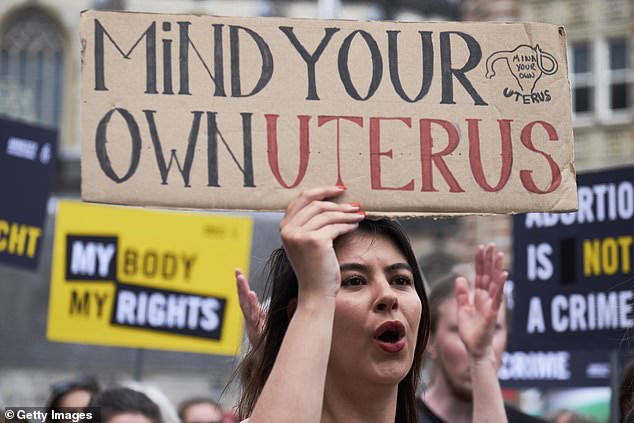 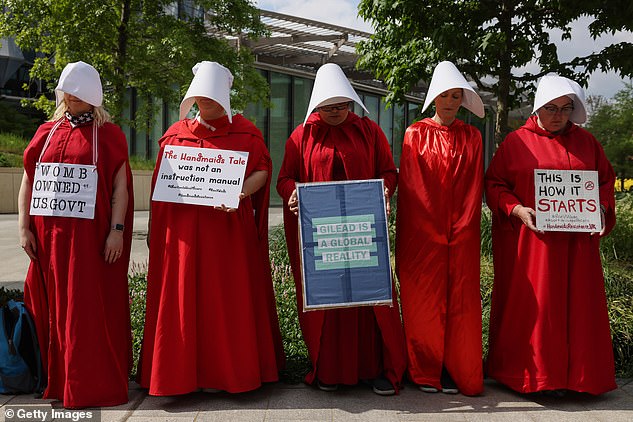 Women dressed as handmaids protest for the protection of abortion rights outside the U.S. Embassy in London

Abortion has become a hot button political issue after Politico published a draft Supreme Court opinion that, if adopted as is by the court, would overturn Roe v. Wade.

Demonstrations have sprung up around the country – both against and supporting the decision.

If adopted, and it could still be changed by the court ahead of its announcement of a decision this summer, each state would have the right to determine its own abortion law.

Multiple states have enacted or proposed strict limits or outright prohibitions on abortion, which is why Democrats are pushing for a federal law. 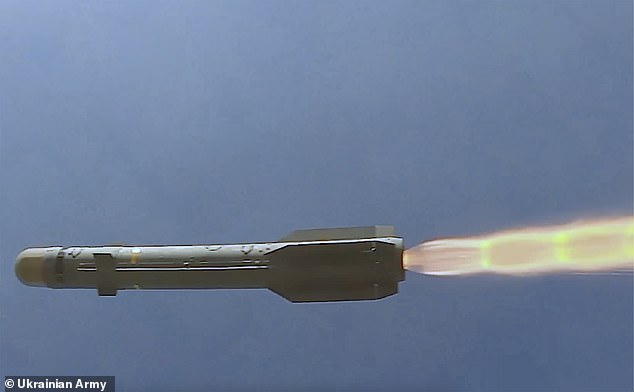 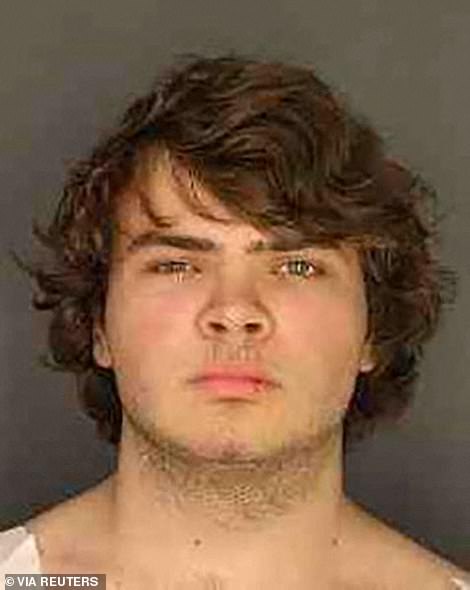 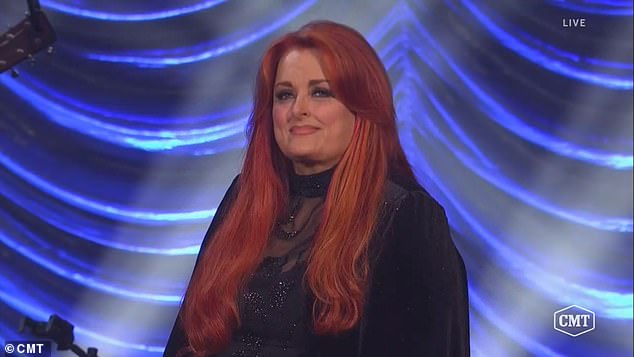 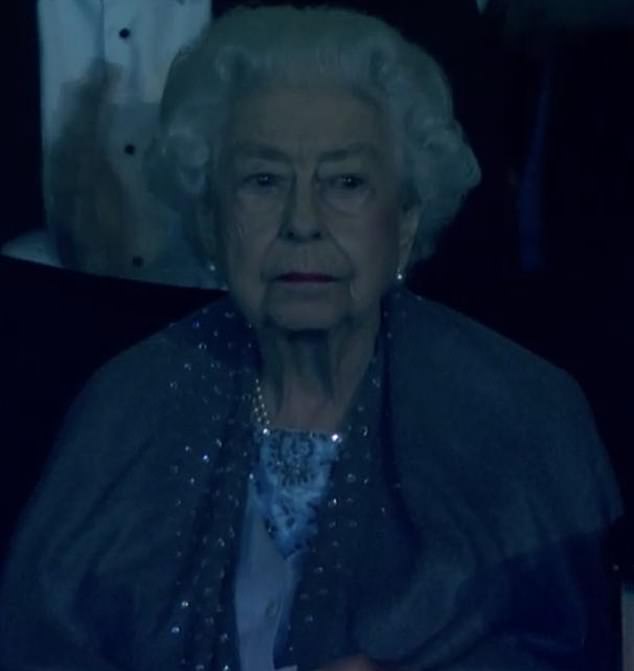 Buffalo shooter, 18, was ‘not on police radar’ despite school shooting threat he made last year
16 mins ago