Casey White is a dangerous survivalist with no regard for human life, more likely to go out in a hail of bullets than surrender, DailyMail.com can reveal.

This is the view of a man who served time with White, 38, and has spent time with him both in and out of prison.

Robert McBay, 29, spoke exclusively to DailyMail.com as the manhunt for White and former corrections officer Vicky White, 56 (no relation) enters its eleventh day.

McBay, who was born and raised in Limestone, Alabama, served time with Casey in 2015 when the fugitive was arrested after a violent crime spree that spanned two states and involved a kidnapping and armed robbery and a shooting that left a family dog dead.

According to McBay: ‘I know what this dude is capable of. He is very dangerous, has no regard for human life. He is elusive and can move very quickly [and] very quietly for a man of his size.’ 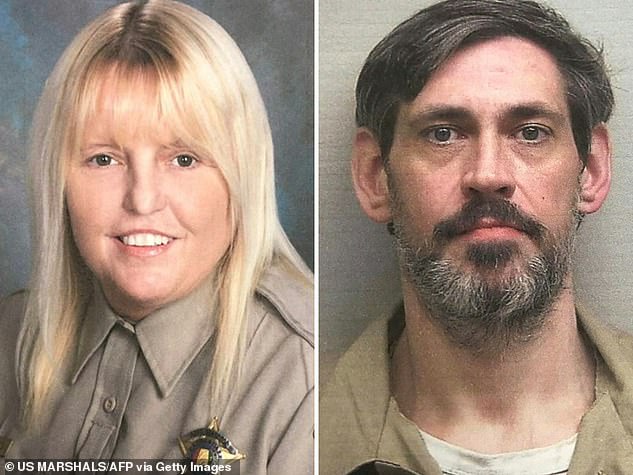 Corrections officer Vicky White, 57, (left) remains on the run with confessed murderer Casey White, 38, (right) after helping him flee Lauderdale County prison in Tennessee on April 29.  The pair – who are not related – shared an intimate relationship dating back to 2020, cops say 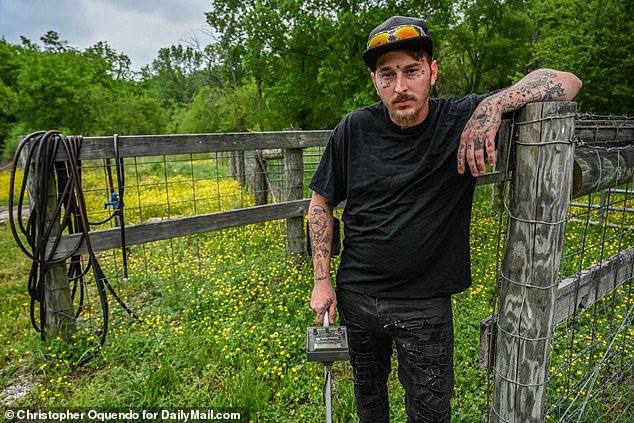 Robert McBay, 29, who served time behind bars alongside Casey White in 2015, told DailyMail.com he believes the fugitive is likely to go out in a ‘suicide by cop’ rather than surrender 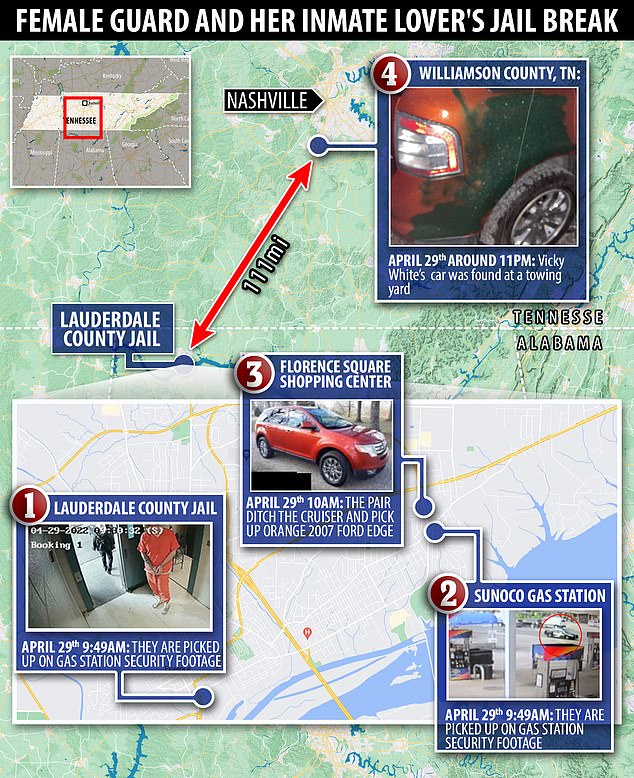 In 2015 McBay was serving 11 months in jail for a drug offense when he was placed in the same pod as Casey in Limestone County Jail.

During that time, he said, he witnessed the older man’s violence and terrifying flashes of psychosis.

McBay said: ‘When Casey gets like that [psychotic] he will stay up for days and is very paranoid, very untrusting, very violent, quick and prone to snap.

‘When he gets in these phases, he has no regard for human life; no man, no woman, child or dog is safe. Whatever gets in Casey White’s way is going to get destroyed.’

On one occasion during his incarceration, McBay claimed, Casey and a fellow convict were put on lockdown for a brutal assault on another prisoner.

‘They beat the c**p out of that guy. Casey was put on rack down, [which is] when they take you and put you in a cell and you’re not allowed out but for one hour a day for exercise and showers,’ he said.

‘No visitation, you can’t buy anything from commissary, or vending machines. It’s probably one of the worst things. We call it going to jail in jail.’

Within 24 hours of being on lock down, McBay said, Casey’s behavior ‘became radically different.’

He said: ‘He was moving kind of jerky, beating on the door, threatening corrections officers when they came past.

‘At one point they came and took him out of the pod and placed him on suicide watch because he said if they didn’t let him out he was going to kill himself. 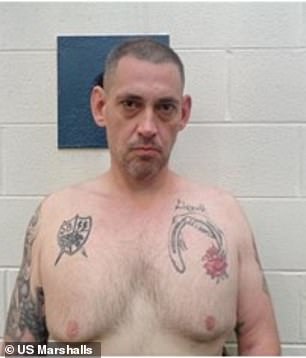 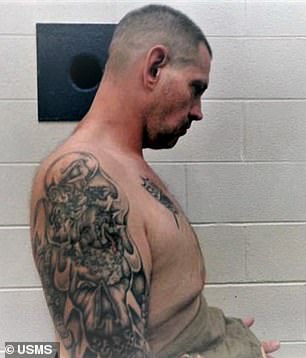 US Marshals have released various photos of the couple, showing off Casey’s tattoos – many of which have references to white supremacy 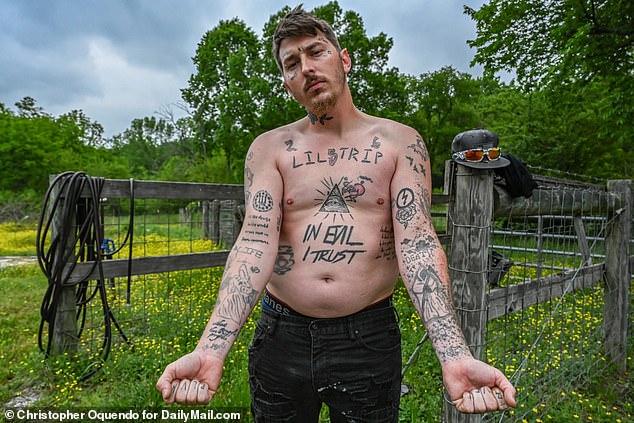 McBay, who showed off his prison tattoos, said he witnessed White’s violence and terrifying flashes of psychosis during their time in jail, and warned he had no ‘regard for human life’ 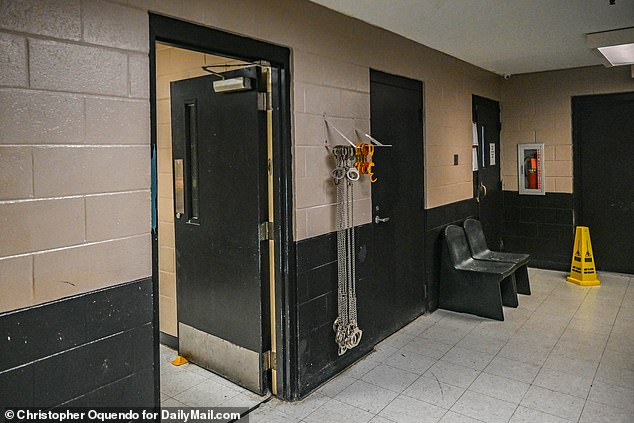 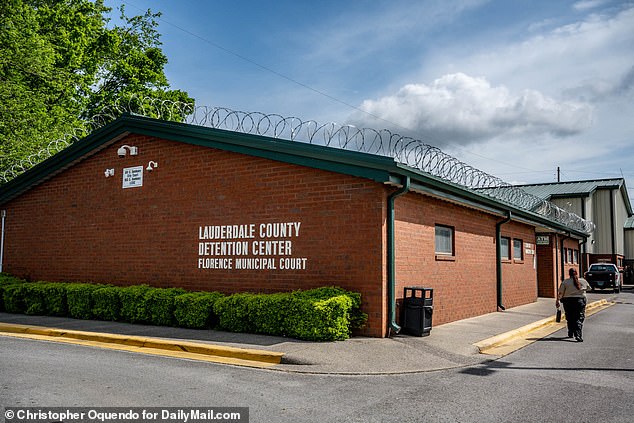 ‘They took all of the bedsheets out of the cell, everything, then they put him in a canvas and Velcro suit and took him out and that’s the last I saw of Casey White at that facility.’

According to McBay, who hosts a podcast ‘Love on the Run: The Search for Casey and Vicky White’, White is utterly ruthless and ‘would rather die’ than go back to prison.

‘He was already facing 75 years in jail, and he still hasn’t faced capital murder charges involving the murder of Connie Ridgeway,’ he said.

White was charged on two counts of capital murder for the 2015 killing of Ridgeway, having confessed to the crime.

Ridgeway, 58, was found stabbed to death in her apartment in Rogersville, Alabama, when a neighbor called for a welfare check. White claimed that he was paid to commit the crime.

Now McBay says, ‘all the females in Casey’s life are terrified of him,’ and, he believes that Vicky White is in danger too.

He said: ‘Vicky is definitely in trouble. She may not know it but at some point she is going to piss him off and it is not going to end well.

‘If Vicky gets cornered, I believe she will try to escape. But if it is Casey who is cornered, he will go out suicide by cop. If you corner Casey, you are going to have to kill him.’

Former assistant director of corrections Vicky sprang White from Lauderdale Corrections Center in Alabama on Friday April 29, under the guise of taking him for a mental health check.

Vicky’s bronze Ford Edge SUV in which the pair made their get-away was discovered some 100 miles north in College Grove, rural Tennessee that same day.

The car, which had been left by the roadside without any tags, sat in a Tennessee tow-lot for a week before authorities realized its significance. 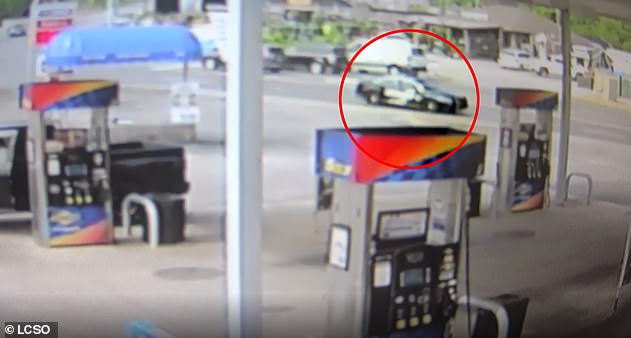 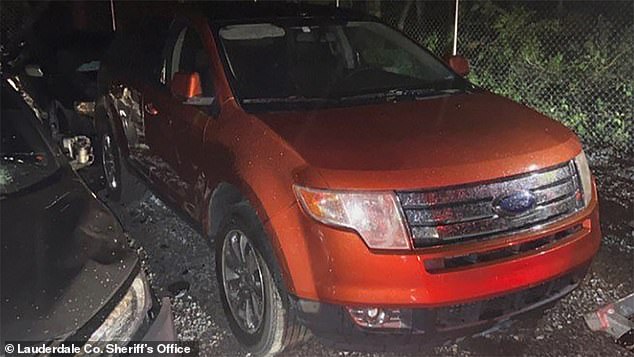 School-bus driver Jackie Adams was coming home from one of her other jobs when she saw the couple’s escape vehicle, a rust-colored SUV parked outside the house T 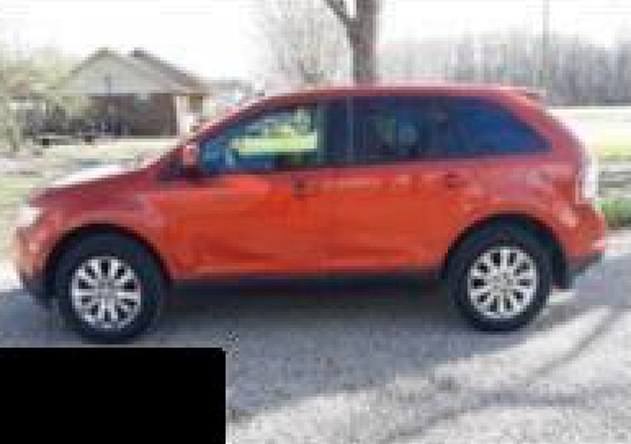 Vicky, who was an assistant director of corrections at Lauderdale County, used a police vehicle to ferry Casey out of the maximum-security facility, under the guise that she was taking the con to a scheduled mental health evaluation. The pair then switched to Vicky’s orange Ford Edge (pictured), which was found in Tennessee

Today, McBay said he believes that White may have been headed for Nantahala National Forest – some 236 miles east of where the car was abandoned.

He claimed that White had spoken about the forest which, at 532,148 acres, is the largest of North Carolina’s four national forests and so dense that in sections the sun only reaches the forest floor at midday.

He said, ‘He definitely has the survival skills and can live out there. He can walk into the woods and be okay. They can disappear easily.

‘People need to watch their fields, their backyards, their gates, any water supplies they might have. They can’t go get gas at this point, they can’t stop for food, water, or get any supplies of oil or anything.

‘Everything they get now is either going to be scavenged or they already had it. They definitely have some type of survival gear that they are running off.

‘In the next one or two weeks that supply is going to dwindle, and they are going to start to get desperate and the next time we see Casey and Vicky is going to be a desperate situation.’

According to McBay, ‘Casey is a survivalist, this was his lifestyle. When he was out, he went camping a lot and went caving a lot.

‘Getting caught is not an option for them. They’re not going to give up and even if she wants to he’s not going to let her. 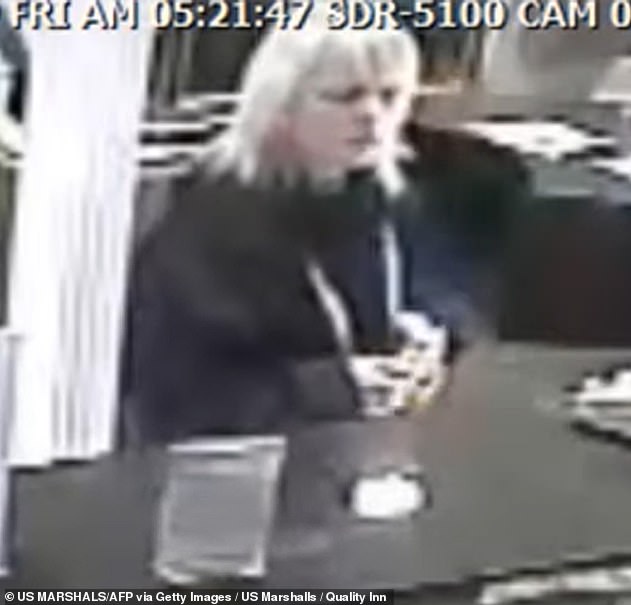 Former correctional officer Vicky White (pictured) was seen checking out of the Quality Inn in Florence, Alabama, the morning she was seen helping her convict ‘lover’ escape jail 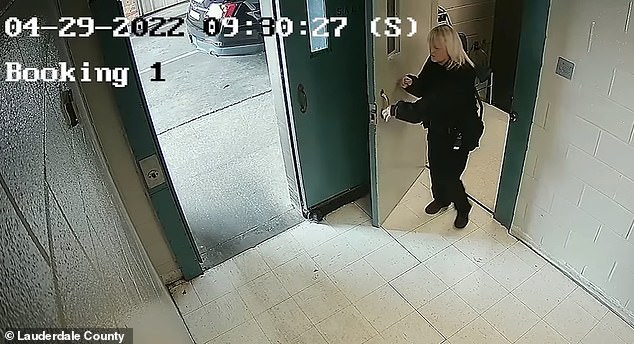 Vicky is pictured ‘waddling’ into the jail and opening an interior door on Friday. Casey is believed to have been in the hallway at the time

Surveillance video previously released showed Vicky helping Casey escape from the Lauderdale County Jail, where he had been incarcerated. The pair then fled together

‘If it comes to that he’ll take her as hostage. Casey wants to die.’

McBay added, ‘Hopefully this ends peacefully but knowing him and knowing what she has done – she just threw away her whole life. This is all or nothing.

‘There’s not taking it back. When she pulled the trigger, and she opened that door on that sally port in that jail she made her decision and there was no taking it back. You can’t un-rob a bank.

‘So, they are going to be desperate. If anybody sees them, I beg you remove yourself from that situation immediately. If they walk into a store play it cool do not look nervous.

‘He has the mental capacity to understand what’s at stake and what’s going on and I don’t think he’s going to have any problem killing anyone who gets in his way.’

April 18: Jail guard Vicky White sold her Lexington home. Public records revealed she sold the property for $95,550, which was below market value. She started living with her mother after the sale.

Pre-prison break: In the week ahead of the escape (specific dates unknown) Vicky purchased men’s clothing at a Kohl’s store and visited a sex shop. It is unclear if she bought anything at the adult toy store.

Lauderdale County District Attorney Chris Connolly claims she also withdrew $90K in cash out of a series of bank accounts.

April 29 at 5.21am: Vicky checks out of a Quality Inn Florence, Alabama.

9.20am: Assistant Director Vicky White tells a deputy to prepare inmate Casey White for transport to courthouse. Deputy removes White from his cell, takes him to booking and handcuffs him and shackles his legs.

9.41am: Vicky leaves detention center with Casey and head to the courthouse for a ‘mental health evaluation.’ She told the booking officer that she is the only deputy available who is firearm-certified and that she’s dropping him off to other deputies at the courthouse. Vicky says she’s then going to Med Plus for a personal appointment.

9.49am: Surveillance video shows Vicky’s police cruiser parked at the nearby Florence Square shopping center parking lot eight minutes after leaving the jail. ‘There was not enough time for them to even attempt to try to come to the courthouse,’ Sheriff Rick Singleton said.

11.34am: A Florence Police Department officer spots her cruiser.

3.30pm: Booking officer reports to administration that they’ve been trying to contact Vicky to check on her, and that her phone is going directly to voice mail. The officer also says that Casey was not returned to the detention center with other inmates.

Approximately 11pm: College Grove, Tennessee resident Jackie Adams finds Vicky’s SUV – with tinted windows and no tags – abandoned by her home. She reported the vehicle to the Williamson County Sheriff’s Office, which had it towed.

May 3: US Marshals issued a warrant for Vicky. charging her with permitting or facilitating escape in the first degree in connection with capital murder

May 4: Vicky and Casey were seen driving around Florence in a police cruiser on gas station surveillance

May 6: Tennessee cops discover the impounded SUV belonged to Vicky, spurring a force of US Marshals, Williamson County Sheriff’s Officers, and SWAT members to circle back to Adams’ property.

Drones and helicopters descended on Adams’ home – where they remained for hours and into the evening.

2.15pm: The Williamson County Sheriff’s Office tweets ‘there is NO sign the two are still in our area.’

May 7: Connolly reveals investigators’ theory that Vicky is rolling Casey, dressed as a woman, around in a wheelchair. Officials also suspect Vicky might be disguising herself as an elderly woman with a grey wig.

Miami mother beat boy, 13, with a belt after he argued with her son